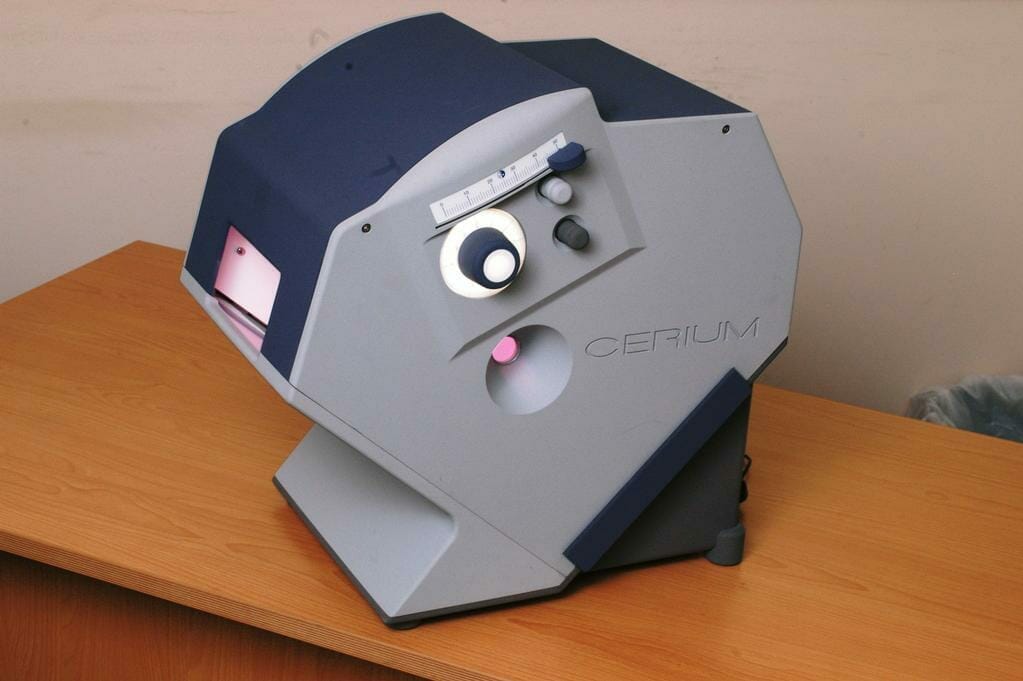 It is ironic or perhaps serendipitous that David Evian was a poor reader and therefore suffered concentration and learning difficulties as a child…because that same poor reader is today helping many others in the same situation… and he’s doing that by having them read through tinted glasses of various hues. That’s right…coloured lenses are helping to treat many children and adults with reading difficulties.

Despite the fact that David’s two older brothers were both brilliant students back in Johannesburg, South Africa, with one becoming a doctor and the other a dentist, David’s learning problems hindered his ambitions to also become a medic.

“I had to work very hard at school…harder than others and had to repeat exams to get through,” says the man who is now State Director of the Australasian College of Behavioural Optometrists.

“Like my brothers, I wanted to be involved in heath care, but I didn’t have the grades to get in, so I finally managed to get into optometry at university.” David says it was during his university days that he was encouraged by lecturers to study children’s vision and that’s when he began to understand his own learning
difficulties.

“Different people are sensitive to different colours.
You walk into a room…it feels very restful to some and
quite annoying to others and the same with the lenses.
We don’t know exactly why, but research has found
that certain colours calm down the visual system…”

That inspired him to complete a Doctor of Optometry at the Pennsylvania College of Optometry in Philadelphia, graduating with Honours in Paediatric Optometry.

“In America, the teaching methods are far superior and most of the exams are multiple choices, so I didn’t have to write and construct essays. It was pretty much recognition of a fact and I had no problem with that,” he explains.

David says during his American sojourn, he was privileged to work with colour in the local low vision clinic where tinted lenses were already being used for partially sighted people, particularly children, adding that
he learned from the best in areas of learning disabilities, partially sighted, visually and mentally disabled people.

“My initial experience working with patients showed me what could be achieved without the need for medical intervention. As time went by I realised that the whole brain system could be reorganised via the visual system to function more efficiently,” David explains.

He then returned to South Africa where he taught for a couple of years before immigrating with his family to Sydney in 1985 where he runs his practice in the north shore suburb of Chatswood.

“Initially I experienced resistance by authorities in Australia to recognise the existence of these learning disabilities, which were preventing children in schools from receiving remediation where necessary. I
campaigned for better diagnosis therapy and after years of lobbying the Australian College of Behavioural Optometry instigated a fellowship exam.

“As one of the initial fellows, I assisted by lecturing students completing their Masters course in Behavioural Optometry.”

Regarding the use of coloured lenses, David says he has found that there was not one colour that solved different visual problems, but that different people simply preferred different colours and that no syndrome followed the same colour.

“This was made much easier when the Colorimeter came out (made by Cerium). It enables you to just look
into the instrument and turn the dial and the dial changes the colours, so it eliminates having to use all the lenses individually, it’s much quicker and a lot more accurate”.

David says research has established that when many people use various colours, they find it a lot more restful on their eyes.

“I do a lot of behavioural optometry and I must point out that colour isn’t the only answer, but it’s a big help. When we set a program for the kids with learning, reading and concentration problems, it’s an extra weapon that we’ve got,” says David.

“We found that when people get migraines, they notice something like a shimmer…like a television screen that wasn’t focussed properly and when we put up certain filters it takes the shimmer away.

“This moved on eventually to dyslexia, learning, concentration and reading problems and by giving the right filters it actually changed people’s lifestyles; gave them comfort, it kept their jobs, got them coping in school and when you help a migraine sufferer, you’re a friend of theirs for life.”

“Different people are sensitive to different colours. You walk into a room…it feels very restful to some and quite annoying to others and the same with the lenses.

“We don’t know exactly why, but research has found that certain colours calm down the visual system,” David explains.

When asked if normal eye check-ups would pick up these sorts of problems, David says: “Unfortunately not. Too much is done in sight testing and not enough in behavioural optometry where we look at visual comfort,
visual focusing and visual processing…reversing letters, getting things mixed up, facing concentration difficulties, mild autism, Asperger’s syndrome.

“All those sorts of things can be helped by behavioural optometric assessment and now, fortunately, we’ve got the Colorimeter which can boost our work even further.”

David has appeared on television and in the print media to explain his work and how it has helped so many and one of those he introduced to the media was ten-year-old Daniel Pascoe who suffered chronic migraines and reading difficulties.

For the past year, Daniel has been wearing a blue lens and he says it has changed his life for the better.
“I used to read and my eyes would skip a line and I wouldn’t read the whole thing. The book wouldn’t make very much sense. I also got a lot of headaches. Now that’s all changed,” he says.

And Daniel’s mother Leanne says the improvement is outstanding.

“He got headaches every two weeks and in the past year he has only had two. That’s an incredible improvement and Daniel is a much happier boy as a result.”

And nine-year-old George Joubert’s mother told the Sydney Morning Herald recently that blue lenses have helped her son read properly for the first time and made him a much happier boy.

“I am not saying colour alone solves the problem,” says David.

“First we find the right prescription and then add the right tint. There is no cure for dyslexia, but this certainly has been shown to give people a far greater quality of life. It stops words running across pages like ants.

“I won’t say this is the only one, but it is one of the links in a chain that we have to strengthen and adjust learning and reading.”

The Colorimeter was first introduced into the U.K. from the U.S. in the late 1980’s. At the time the diagnostic process of prescribing coloured lenses for children who struggled to read received wide publicity and there were numerous reports of significantly improved reading speeds and accuracy following application of the optimum lenses.

Despite positive reports, because of the lack of supporting evidencedbased research, scepticism was rife
amongst eye care professionals. A media debate at the time prompted research psychologist Arnold Wilkins to investigate claims of the existence of an underlying syndrome which adversely affected reading in many people.

Wilkins, who had previously researched photosensitive epilepsy in Canada before joining the prestigious
British Medical Research Council in Cambridge, was struck by similarities in symptoms reported by poor readers who benefited from the lenses and by sufferers of photo-induced seizures.

In the following five years Wilkins and his team carried out double blind studies and published research identifying an underlying photosensitive syndrome which could prevent sustained focus on small repetitive black print against a stark white background.

Wilkins designed the Intuitive Colorimeter in the early 1990’s.

In describing the equipment Wilkins says: “it was intended initially as a research tool, but following the double masked study was manufactured for use in optometric practice, with optimum lenses prescribed following elimination of other vision deficits identified by normal testing procedures.

“Visual Stress can, however, run concurrently with other vision deficits and is often present in those who suffer more complex learning difficulties.

“The Colorimeter is a calibrated instrument which changes the hue, saturation and brightness separately to
arrive at the optimum shade of colour that helps to eradicate distortions perceived by many who struggle to read.

“Initial research identified 20 per cent of the population as suffering from problems associated with light sensitivity; with five per cent suffering severe symptoms which could interfere with reading development. Many of this group are also susceptible to headaches and migraine attacks,” said Wilkins.

Research continues into the the use of coloured lenses in medical and neurological conditions. The
Colorimeter is currently used in the U.S. in work with closed head injury patients and brain trauma following accidents and war injuries where the ability to cope with bright lights or daylight is affected.

Over 500 community optometrists and hospital visions clinics in the U.K. use colorimetry and every British School of Optometry maintains a colorimeter.

The Colorimeter is distributed, under license to the MRC by U.K. company Cerium Visual Technologies and
by Cerium Optical Australia in Australasia.