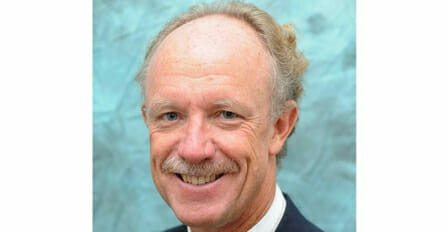 Mr. Kotow was previously Vice President Asia Pacific for CooperVision and Managing Director of Hydron. He has also worked in leadership positions with global eye care companies Allergan and Biocompatibles International and brings to EPL a strong track record of successfully acquiring, integrating and leading businesses.

In this wide-ranging interview, Mr. Kotow talks frankly to mivision about his plans for EPL and the state of optometry in Australia.

Q. In what state did you find the company (EPL)? What are your plans and vision for the company?

A. Growing businesses is what I find exciting. The fundamentals of the business are strong and the potential for growth is considerable. Over the past two and a half years the Company has grown very quickly and operates in 41 locations.

The business is ideally positioned to grow revenues across the existing optometric practices and expand its optometric business footprint through acquisitions.

Q. How has optometry in Australia advanced or changed in the last few years, from when you were at CooperVision until today?

A. Obviously, corporate optometry is the biggest change. It has increased its presence within Australia resulting in changes on many levels. These changes provide both challenges and opportunities.

Optometrists now have a wider choice of options in how they practice optometry and suppliers are reviewing their supply chain offering. For example, General Optical recently launched what they term their “integrated supply chain” where they now offer a complete and integrated package which enables you to deal with one company for frames, lenses, jobbing, marketing and many other areas aspects of practice management.

Q. In the past, optometry graduates have been predominantly Anglo male. Now, with an ever growing percentage of graduates being female do you see these women taking over these roles in the future and steering the profession?

A. The demographics of graduates for most professions have been changing and this is particularly evident in a greater percentage of female graduates but, is also a reflection of how the Australian population is changing as a whole.

Naturally, the influence of women within our profession will continue to grow. Now, women occupy positions on State OAA’s, registration boards and large optical companies. These changes in the optometric profession mirror the changes occurring throughout other professions.

The growing percentage of females within the profession may result in changes in how the profession meets the needs of the optometrist such as the balance between the demands of professional life with domestic life. This is where an environment such as EPL’s can be very attractive to a female optometrist (and male) who wants to practice in a strong clinically focused environment, is looking for flexibility in working hours, can have portability of employee benefits and can avail themselves of differing modes of practice without taking on the full responsibilities of running a business.

Q. What are some of the problems optometry still faces today and how will we overcome these problems?

A. Challenges facing the profession revolve mainly around distribution of optometrists, the size of the Medicare purse, an ageing population, the role of private health funds and the use of optometric assistants.

Similar to other professions, optometry faces the challenge of high numbers in the cities and low numbers in rural areas. Attracting graduates to rural and remote areas is a continuing challenge (and this is not unique to optometry). We have introduced a cadet program for optometry students with the view of introducing them early to the Company and its ethos and making them aware of the opportunities within and outside the main cities.

Ensuring entry into optometry schools of rural students is another way of addressing the rural issue. Other things that could be considered is to give a HEC’s break to those graduates who are willing to work in the country and to give CE bonus points to graduates working in the country. More can be and has to be done to address this issue.

In relation to Medicare, the current low dollar value of the scheduled fees and a cap on what optometrists can charge means optometry will still need to rely heavily on selling what they prescribe if they are to keep reinvesting in their practices. This needs to be readdressed so that a larger percentage of income is derived from consultations versus the item prescribed. One way of addressing this issue is to look at moving from bulk billing and where applicable and charging a fee for service.

Private health funds now play a far more active role in the optical business by either running their own clinics or entering into commercial relationships where their customers are offered a no gap service for optical appliances. This further changes the dynamics of the industry and provides both opportunities and challenges for optometrists and suppliers.

Q. What is the future for the profession in Australia – both short term and long term?

A. The future for the profession is very positive. Optometry is the main provider of primary eye care within Australia and this will be further strengthened as the profession embraces new technology and increases its range of expertise such as in areas as therapeutics, etc. The demand for optometrists will be high for some time as we see heavy investment within the profession by a number of players as they open up locations across the country.

Q. Do you see the future heading towards a more integrated ‘team approach’ between the various eye health professionals (i.e. optometrists, ophthalmologists and dispensers working together)?

A. The past years has seen a closer relationship develop between optometrists, ophthalmologists and dispensers, especially on a professional and individual level. This relationship will further strengthen in the future.

Having all three professions work in the same environment would be ideal but, with the growing presence of corporate optometry I do not see this occurring in large numbers. The relationship between GP’s and optometry has also strengthened over the past years and in my opinion, it is vital to continue to encourage this.

Q. Is the regular eye care test message getting through to the public and if not, what can optometry do to get the message through?

A. Data indicates the percentage of Australians having a regular eye exam is low when compared to other developed countries. As the main provider of primary eye care, Optometry has a key role in educating the public of the benefits of regular eye exams.

By partnering with organisations such as the Macular Degeneration Foundation in their awareness week last month (May) and the Eye Foundation’s JulEye campaign, in which they’re attempting to encourage people to have their eyes tested during the month of July, we can help educate the public about the value of regular eye exams. More can be done but this needs to be a partnership between the profession, the government, suppliers and other stakeholders.

Q. Are there enough optometry graduates and if not, how do we increase the numbers?

A. The issue of numbers has been a perennial problem and the data indicates there are sufficient graduates but, where are they? Anyone who runs a rural based optometric business will testify as to how difficult it is to get optometrists. Not helping the situation has been the lack of graduates for a year as a result of the optometry course being extended.

The key issue is not the number of optometrists but having them in the right areas to meet the demand. As mentioned previously more creative thinking by the government and professional organisations could help address this issue.

Q. How does Australian optometry compare to how the profession is practiced in other developed countries?

A. Australian optometry is constantly evolving and advancing. The scope of optometry is expanding and therapeutics is an excellent example of this. The advent and accessibility of new technologies, for example, OCT is also expanding the scope of optometry. These and other changes ensure Australian optometry is being practiced at the highest level and when compared to other countries such as the USA the differences in the level of care being offered is becoming negligible.

We as a Company are also conscious of the need to help the profession advance in developing countries. Currently EPL are a sponsor of Optometry Giving Sight and are exploring other areas where we can have a positive influence on optometry in these countries for the benefit of providing much needed eye care to their citizens.

Q. How has optometric research and developments advanced?

The advances in optometric research and development in recent years has been due in part to the successful partnership between optometry and other professions such as biochemists, microbiologists, material engineers etc. This partnering of different skill sets has facilitated optometry to move into areas that are new and exciting.

It should be kept in mind that Australian optometry has for many years been a significant global contributor in the area of education, research and development.

Australian optometrists have previously, and are now occupying, significant positions both locally and globally in universities and companies associated with research and development. Australian optometry has developed significant research facilities within the country which are internationally recognised as centres of excellence. An excellent example of this being the Vision Cooperative Research Centre (Vision CRC) which announced at the launch of the Brien Holden Vision Institute, in March, a breakthrough in myopia control using either spectacle lenses or contact lenses. The advances in optometric R& D are a credit to these optometrists.