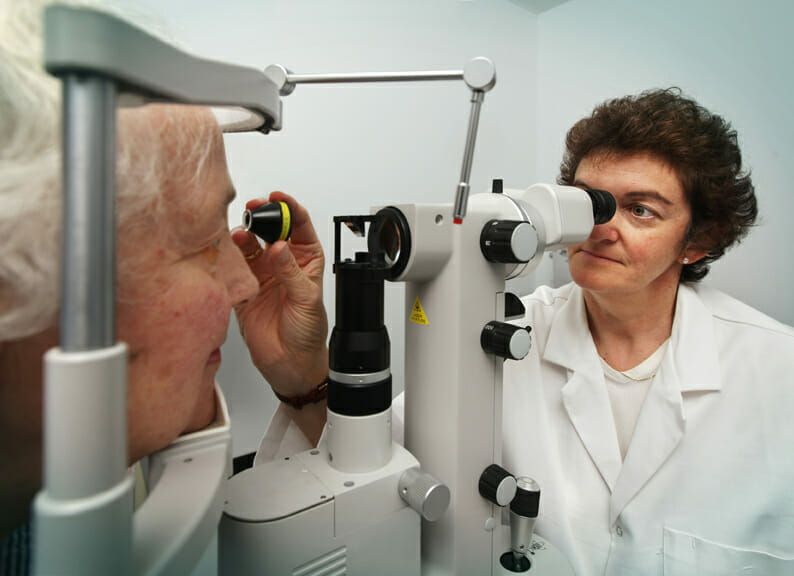 It’s been nearly 10 years in the making, but a new laser treatment pioneered in Australia is set to herald a revolution in the treatment of Age Related Macular Degeneration (AMD) and Diabetic Macular Edema (DME).

This new laser treatment, known as Ellex Retinal Regeneration Therapy (Ellex 2RT), has already been used in human trials. Researchers are not only optimistic, but excited about the efficacy of the treatment, and are confident patients worldwide will be the beneficiaries.

The treatment uses nanosecond laser technology and hopefully, it’s about to completely revolutionise the world of ophthalmology.

For years now, eye specialists have used laser technology to treat numerous eye complaints and diseases. Although successful in treating a range of eye disorders, the heat from these lasers causes collateral damage, rendering them ineffective in the treatment of some eye diseases, such as Dry AMD (the earlier form of AMD, which accounts for approximately 85 per cent of all cases of AMD).

We are using nanosecond technology; that is, the pulse of the laser is in the nano range

But now, Adelaide-based laser company Ellex has come up with what appears to be a brilliant solution – the Ellex 2RT laser.

The company’s CEO, Mr. Simon Luscombe explains: “We are using nanosecond technology; that is, the pulse of the laser is in the nano range. Being able to crop laser light into an extremely short pulse is really difficult but we are able to do that and channel it through an optical fibre.

“It’s something we’ve developed in house over a long time.

“Tests have shown there is no damage to the retina and you don’t get a scotoma which is an area of black vision.”

Mr. Luscombe says that Ellex 2RT has been nearly a decade in the making and began with a partnership between Ellex and renowned scientist Professor John Marshall at St Thomas’s Hospital in England.

“The original thinking behind Retinal Regeneration Therapy is that we wanted to be able to fire a laser into the back of the eye without causing any damage,” says Mr. Luscombe.

“Normally, any laser fired into the eye does some damage to the tissue. Generally, lasers used in ophthalmology are thermal and coagulate the tissue so it welds it together if you like, which is not what we want to do with Ellex 2RT.

“We wanted a laser that wouldn’t cause damage and would instead affect tissue at a certain depth or a certain layer within the retina. Now, having refined the technology, we’ve got a situation where we can fire the laser into the eye without causing any tissue damage in order to fix the cells at a certain layer. These cells are targeted selectively. Some of the cells disappear and then other cells take over, effectively regenerating the retina (see figure 1).”

As CEO of the company developing the laser, you would expect Mr. Luscombe to talk it up, but it’s far from hype. His optimism is shared by the foremost researchers in the field of eye disease.

Professor Robyn Guymer is Head of Macular Research at the Centre for Eye Research Australia (CERA) and is leading the ‘Ellex 2RT for Early AMD Study’ at the Royal Victorian Eye and Ear Hospital (RVEEH) to investigate the efficacy of Ellex 2RT for treating patients with bilateral high-risk early AMD. She recently reported the interim six-month trial results at the Association for Research in Vision and Ophthalmology (ARVO) meeting in Fort Lauderdale in Florida. The trial is being undertaken over 12 months. The published results currently include 14 patients at six-month’s follow-up and show the majority of patients experienced improvement in visual function and drusen reduction.

She found that drusen – the little fatty deposits you see in the back of the eye in Dry AMD – decreased in 70 per cent of treated eyes, demonstrating a partial reversal of the degenerative processes which cause AMD. Central visual function improved in 50 per cent of treated eyes and retinal imaging confirmed there was no evidence of laser damage to photoreceptor cells.

“The laser protocol is very simple,” Prof. Guymer explains. “It’s 12 little spots of laser to the macula only once, which induces a wound-healing effect in order to improve the function of the retina. It’s a very simple, low dose unstopped 12 spots of laser.”

She says the patients involved in the trials all had good vision, so they did not see too much benefit in terms of their day-to-day activities.

“But when we test them in a laboratory, we are certainly seeing improvements in the way the retina is able to respond to different stimuli. It seems to work much more normally and some of the early clinical signs of the disease, such as drusen are disappearing (see figures 2 and 3).

“The results are very encouraging. While it does not prove we have cured the disease, we believe we are seeing evidence that it is slowing down or reversing the changes.”

“Presently, if a patient is diagnosed with Dry AMD they are told that nothing can be done until the disease reaches its late stages, known as Wet AMD – by which time most patients have suffered irreversible vision loss.”

Prof. Guymer says the next step is to undertake randomised clinical trials where half the people have Ellex 2RT treatment and half do not. Preparation is already underway to conduct these trials in Australia, Europe and the United States of America.

Dr. Bob Casson, the Associate Professor of Ophthalmology at the University of Adelaide and board member of the Ophthalmic Research Institute of Australia was also involved in trials of the ‘Ellex 2RT for Diabetic Retinopathy Study’ at the Royal Adelaide Hospital.

His brief was to compare the efficacy of Ellex 2RT and conventional retinal photocoagulation for the treatment of DME. He too, recently reported the completed six-month clinical results for 48 patients at ARVO: at six months Ellex 2RT produced very similar reductions in macular edema as compared to conventional retinal photocoagulation, while using approximately 500 times less laser energy and inducing no collateral damage.

“Diabetes is the most common cause of blindness in the working age population worldwide. It can be very harmful to the eyes and damages the retina ­- the light sensitive film at the back of the eye.”

One thing diabetes causes is leaky blood vessels. Instead of being nice, tight hose pipes, these vessels start leaking and you end up with a foggy, swollen retina when it should be nice and smooth and flat to catch the light.

For many years now, eye specialists have treated diabetic eye disease by using retinal photocoagulation to dry up the leaky blood vessels and help reduce swelling of the retina.

“The traditional laser we’ve used for many years is a thermal laser. It heats up the tissue and essentially cooks the retina. Unfortunately, in the process of treatment, it damages the retina,” Dr. Casson explains.

“This is where Ellex 2RT comes in. Two years ago I ran some laboratory research. Initially we studied lasers in rats to assess the effect of the laser on the retina. The new laser is more sophisticated. It delivers much less energy to the retina, so it doesn’t heat the retina at all.

“The burst of laser is so quick, it’s actually too quick for the surrounding tissue to heat up. It’s a bit like touching your eye very quickly with your finger.”

Dr. Casson says he and his team were very impressed that the new Ellex 2RT laser performed as the engineers thought it would and caused very little if any damage to the retina.

“What we did then was trial the new laser in a pilot study in patients with diabetes to assess its effectiveness. We were quite certain it was safe, but we didn’t know if it would be effective. What we did was compare it with conventional retial photocoagulation in a randomised fashion. So half the patients got the old laser and the other half got the new laser.

Dr. Casson points out that this was a small study and before Ellex 2RT goes into general use, larger studies are needed. If the results are as promising as the initial studies, it will find its way into general use.

“It is exciting to be involved with this research. I have been impressed so far and I feel very confident that it will succeed.

“If successful it will gain worldwide use and it will be a great export for Australia. We must remain cautious, but this looks as good as anything.

“The final outcome could be that eye specialists have to change the lasers in their rooms. More importantly, though, this will benefit patients enormously with an effective and safer laser, better outcomes for their eyes and a much better quality of life.”

According to Ellex CEO Simon Luscombe, there will be more human trials, but so far the data is very encouraging. If successful it will be all systems go for Ellex 2RT. Once the company has sufficient clinical evidence from the extended trials the new laser will be rolled out as quickly as possible.

“If we have one patient where we fire a laser into the eye and he or she has a much worse situation than when they started, we will go back to the drawing board. We haven’t had that happen yet and all the signs are very good.

“This is a unique, patented technology. We still have to prove ourselves in the trials, but I am confident we will,” said Mr. Luscombe.