AMD: What We Know 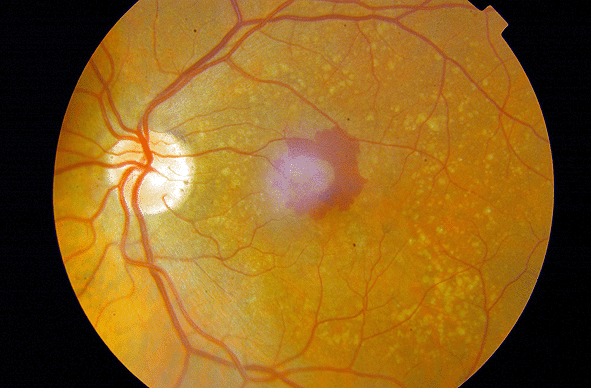 Age related macular degeneration (AMD) is often in the news – but what is it and how is the condition identified? While the short answer to the first part of the question is usually, “We don’t know!” there is, in fact, a lot we do know about AMD. This first part of a three part series on AMD is on ‘What we know about AMD’.

Age related macular degeneration (AMD) is a multifactorial, complex disease with genetic and environmental risk factors that affect the central photoreceptor, retinal pigment epithelium, and choriocapillaris. This devastating disease affects visual acuity and is the leading cause of legal blindness in older populations in the western world. Its socioeconomic impact cannot be underestimated.

For convenience it is common to refer to the wet and dry forms of AMD. The former is caused by the growth of new vessels under the pigment epithelium with subsequent leakage and bleeding. The latter is typified by atrophic changes. In real life, these neat categories often co-exist in one eye and can change from one form to the other.

AMD may be asymptomatic at first, with only mild changes in acuity.

The current generation of spectral domain machines provide resolution to almost a histological level, giving unprecedented information about the state of the macula

AMD is found in people over the age of 50. Any patient over age 50 that complains of reduced best corrected acuity should have a dilated pupil examination to exclude or assess macular degeneration. There are other forms of macular degeneration which can be found in those who are younger.

Sometimes AMD is found on a routine refractive examination or the patient may present because of family history.

The role of smoking in AMD is now well documented and is a preventable component. Smokers are four times more likely to get AMD than non-smokers or those who have given up smoking. Smokers also develop AMD on average 10 years earlier than non-smokers.

Researchers continue to explore the role of oxidative damage to the retina and some of our treatment flows from this work. Current data tells us that cataract surgery does not contribute. There is no evidence that sun exposure contributes. However dietary factors are implicated. A high fat diet is a risk factor for AMD. Diets with a good component of fish are protective.

The role of genetic factors continues to be elucidated. In particular a lot of research is directed toward a protein set known as complement factor H. In addition, if your brother or sister have the condition, then you have a nearly 50 per cent risk of developing it as well.

Symptoms of AMD are primarily blurring of vision and distortion in one or both eyes. Patients will describe decreased reading times, with words jumbling into one another. Facial recognition becomes increasingly difficult. Central or paracentral scotomas may be noticeable. Distorted vision is often more noted in vertical lines. We are often told that distorted vision is always caused by the ‘wet form of AMD but in fact, distortion is not uncommon in the ‘dry’ form. However, sudden onset of distortion is more likely to indicate wet AMD.

Of course, cataracts are frequently seen in patients with AMD and the relative contribution of these two conditions to the reduced vision can be hard to assess at times. Occasionally the AMD is not revealed until after a dense cataract is removed and vision fails to improve. Rare symptoms include semi-formed or fully formed visual hallucinations, or even more disconcertingly, visual ‘echoes’ in which a scene is replayed constantly before the sufferer. These symptoms are not indicative of mental illness.

The hallmark of macular degeneration is the presence of drusen. Drusen are deposits associated with the retinal pigment epithelium. They are classified on the basis of size: small, medium, and large. They appear as small roundish, yellow-white lesions underneath the pigment epithelium. The presence of a few tiny drusen is not uncommon, even in relatively young people, and is not a risk factor for AMD. It is the larger drusen that are associated with increased risk. A large drusen has a diameter greater than that of a retinal vein as it leaves the optic disc margin. There are a number of other terms used for drusen including hard and soft drusen, regressing drusen, reticular drusen, semisolid drusen.

The next most significant finding is of pigmentary abnormalities at the macula. These include focal hyperpigmentation, areas of depigmentation, or small areas of atrophy of the pigment epithelium outside the fovea. The development of pigment abnormalities indicates a strong likelihood that advanced AMD may develop. Advanced AMD is marked by the presence of a large area of atrophy involving the fovea, known as geographic atrophy (GA), or by the presence of choroidal neovascularisation (CNVM).

Advanced AMD is usually associated with a significant decrease in visual acuity. The presence of advanced AMD in one eye confers a nearly 50 per cent risk of advanced AMD developing in the fellow eye within five years. Other features of AMD include pigment epithelial detachments which are elevations of the retinal pigment epithelium caused by accumulation of serous, haemoserous, fibrotic, and other lipoproteinaceous materials. One may also see a ‘rip’ of the retinal pigment epithelium, severe fibrotic scarring of the macula known as a disciform scar, and various haemorrhagic presentations even including dense vitreous haemorrhage. These last features tend to be associated with severe loss of visual acuity.

Diagnosis of AMD commences with the usual techniques and particularly with assessment of other causes of visual loss. The role of accurate refraction to give best corrected acuity is central. The Amsler grid chart can be used to document metamorphopsia. A dilated pupil examination is crucial.

I personally recommend examining the macula with the slit lamp and a non-contact lens such as a 60 dioptre. Alternatively colour and red free fundus photos with a good quality camera can be used. The direct ophthalmoscope is not particularly useful for examination due to its small field of view and non-existent stereopsis.

The next step is to carry out an optical coherence tomography scan. There are a number of machines available for this task. The current generation of spectral domain machines provide resolution to almost a histological level, giving unprecedented information about the state of the macula. It enables close inspection of drusen, the sensory retina, the pigment epithelium, and associated pathology.

Further examination may then be carried out using fluorescein angiography which gives a definitive diagnosis of the nature of choroidal neovascularisation amongst other things. Fluorescein angiography is a test in which an intravenous injection of fluorescein is given followed by flash photos as the dye passes through the various ocular circulations. Other adjunctive tests include indocyanine green angiography which is useful to differentiate mimicking conditions such as polypoidal choroidopathy, and fundus autofluorescence which assesses the health of the retinal pigment epithelium. Rarely a B-scan ultrasound is required to provide a coarse assessment of the retina through opaque media.

Once a diagnosis is made, a treatment plan can be created. It is important at this time to counsel your patient in regard to their prognosis for vision both with and without treatment. Temporising patient expectations with reality often requires considerable explanation. In addition, it is important to discuss the value of seeking support from family members and organisations such as Vision Australia.

With the revolution of anti-vasoendothelial growth factor agents (anti-VEGF) the goal for treating AMD is not only to prevent loss of vision but to actually improve acuity. In the second part of this series as I will look at treatment options for AMD.

For further information on AMD contact the Macular Degeneration Foundation on (AUS) 1800 111 709 or go to www.mdfoundation.com.au.

Dr. David McKay trained at the Sydney Eye Hospital before graduating with the Fellowship of the Royal Australian College of Ophthalmologists in 1988. He undertook further training in surgery and diseases of the retina at the Lions’ Eye Institute in Perth, WA before working in the U.S.A. in ocular oncology with Professor Jerry Shields. David returned to Sydney in 1991. He is in private practice in Macquarie St Sydney, Concord Hospital Medical Centre, and in Bathurst and Orange.