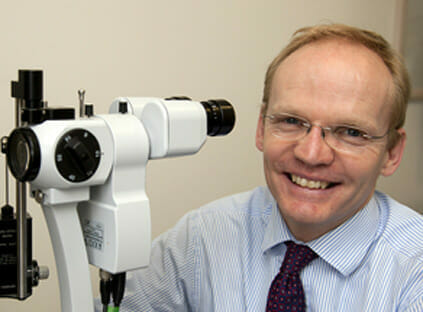 Clinician-scientist, Professor Jonathan Crowston, is at the forefront of translating research from bench to bedside. This article marks the first of a regular series for mivision on important issues and challenges facing the eye care industry. In it, Professor Crowston looks at one of the biggest problems facing eye care providers – patient compliance.

Non-adherence to medical advice is one of the most common preventable health care problems and a major obstacle to effective health care delivery.

Frequently, non-compliance is the failure to take medication as prescribed. But it can simply include failing to wear prescription glasses or not following dietary advice.

Everyone fails to follow health advice occasionally. I’m certainly guilty of skipping the gym and occasionally overindulging on the weekend. However, the failure to follow advice is a major problem when it leads to serious health complications. For a patient with the early stages of glaucoma, adhering to the prescribed medication schedule could mean the difference between losing and preserving their sight.

Patients who hold strong beliefs in the need for medication are less likely to forget their drops and maintain their regime in difficult circumstances.

Research by the World Health Organisation into adherence by patients living with chronic conditions in developed countries found that around half fail to follow long-term therapy advice.

It’s a frustrating predicament for health care practitioners who typically respond with the adage ‘you can lead a horse to water but you can’t make it drink.’

Patients Can be Influenced

As professionals, we strive to give our patients the best possible advice while they’re in the chair but we can’t control their actions once they leave. Or can we?

Research shows that practitioners can significantly impact their patient’s adherence to medical advice. As practitioners, we must share the responsibility for non-adherence with patients and formulate creative solutions to address the problem.

Practitioners cite a number of reasons why patients don’t follow medical advice. The Centre for Eye Research Australia (CERA) is investigating patient adherence to better understand the causes of non-adherance and how it can be addressed.

Diabetic retinopathy is the leading cause of blindness in working-age adults. Studies show that proper management of blood glucose levels and hypertension reduces the incidence and progression of the disease. Despite this, a CERA pilot study indicates that just 15 per cent of diabetic patients keep their blood sugar levels within the optimal range. The finding has led to an investigation into barriers to optimal diabetes management. The project, currently underway, is assessing the biomedical, behavioural, and psychosocial factors that predict poor diabetes care. Researchers hope the study’s findings will help medical professionals to better support and educate patients about their treatment needs.

In another study, CERA researchers interviewed patients attending the glaucoma clinic of the Royal Victorian Eye and Ear Hospital. Interviewers examined a patient’s ability to read standard pharmacy labels and tested their ability to recall label information. The study found that 12 per cent of patients couldn’t read the standard pharmacy labels issued at the hospital. Further, 32 per cent couldn’t recall the type of drops they’d been prescribed or the frequency by which to use them.

Unsurprisingly, the study found that the inability to read or recall prescription information is associated with glaucoma severity. The study resulted in the adoption of large print labels on some medications administered by the hospital pharmacy.

Research has shown that non-adherence is highest in conditions with minimal symptoms and in those with long term and complex medication regimes.

Non-compliance: Intentional or Not?

To the practitioner, intentional non-adherence defies logic. But to the patient without symptoms, who’s unaware of the long-term consequences, non-adherence seems quite reasonable. Why take costly medication that doesn’t appear to be effective? And anyone who’s had to follow a complicated medication regime will know it’s an arduous chore that requires organisation, planning and persistence.

A CERA study into intentional and unintentional non-adherence with prescribed glaucoma drops found that of the 45 per cent who didn’t follow the prescribed medication regime, a third were intentionally non-adherent some or all of the time.

The study found that intentional non-adherence was more common in younger patients and those without other chronic health problems requiring medication. It was also linked to a low belief in the necessity for eye drops. This indicates that patients who hold strong beliefs in the need for medication are less likely to forget their drops and maintain their regime in difficult circumstances.

These findings have significant implications for the strategies we as practitioners should adopt to encourage adherence.

While every patient should be aware of the consequences of non-adherence, the findings indicate this need is particularly pertinent to young people and people without symptoms. Other simple solutions may include asking patients to repeat the advice, suggesting patients set a medication reminder alarm and providing easy to understand information in an appropriate format.

Research underway by CERA, the Bionic Ear Institute and its commercial partner, is investigating the development of new drug delivery devices that could radically improve the rates of adherence. One device is a drug-polymer conjugate. Essentially, the device is a biodegradable implant that releases a controlled dose of medication, to a targeted area, such as the eye, over an extended period of time.

The technology is being developed for the treatment of bacterial endophthalmitis, an inflammatory reaction to eye infection and similar treatments for glaucoma may be possible in the future. The technology could revolutionise the treatment for diseases that require long term treatment.

There’s a clear need for a joint effort between researchers, practitioners and patients to achieve the best outcomes for people that require long term medication and intervention. It’s a complex problem but sometimes complex problems can have the simplest solutions.

Professor Jonathan Crowston is a clinician-scientist who specialises in glaucoma and is the Managing Director of the Centre for Eye Research Australia. He completed his ophthalmology training at Moorfields Eye Hospital, London and subsequent Fellowships at Westmead Hospital, Sydney and the Hamilton Glaucoma Centre, University of California, San Diego. His research is focused on age-related neurodegeneration and neuroprotection of the optic nerve.