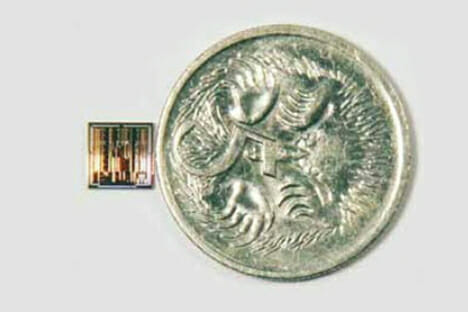 A breakthrough microchip, smaller than the figure ‘5’ on a five cent piece, brings an Australian retinal implant much closer to reality according to researchers at Bionic Vision Australia (BVA).

Associate Professor Gregg Suaning, who leads BVA’s wide view device development team, said “at only five square millimeters, the device is tiny, but represents a significant advance in nerve stimulation technology. It has 98 precisely-controlled stimulation channels and numerous features that allow for the delivery of electrical stimulation that can restore some sense of vision.”

BVA’s director, Professor Anthony Burkitt, said the advance in technology will ultimately deliver improved independence and navigation ability for the vision impaired community. “This microchip is at the heart of the retinal implant, which stimulates the retinal cells to elicit vision. It is an important component in the development of our first bionic vision system that may provide real, functional benefits for patients and make our technology competitive internationally.”

The breakthrough follows the news that U.S.A based Second Sight has received approval to begin commercial sales of their bionic eye technology in Europe.

Prof. Burkitt said Second Sight’s progress is “tremendous because it indicates that the technology has application”. However, he cautioned, “first to market is not necessarily best…

Prof. Burkitt said Second Sight’s progress is “tremendous because it indicates that the technology has application”. However, he cautioned, “first to market is not necessarily best”.

That’s because “any device like this needs to prove itself for a whole cohort of patients. Outcomes can be variable and so we need to see the full spectrum for a number of patients to be sure of the implant’s effectiveness”.

With that in mind, BVA’s focus is on refining their technology to ensure the implant is safe. “We want to be sure that our implant will last the lifetime of a patient,” he said.

It’s something he believes BVA will be able to achieve. Some of the team’s researchers were instrumental in developing Australia’s ground breaking Cochlear hearing implant and they have used the basis of this technology for the bionic eye. As such, the materials have already proven to be well tolerated by the body.

If the success of the Cochlear technology is anything to go by, BVA’s development could be an international hit. “The Cochlear implant was by no means the first hearing implant to be commercialised, and yet it now holds 70 per cent of the international market,” said Prof. Burkitt.

Twenty years after its development, more than 20,000 people around the world benefit from a Cochlear implant each year.

Prof. Burkitt said the first bionic eyes from BVA will be implanted in patients with retinal pigmentosa, and as the technology progresses, will become available to people with age related macular degeneration (AMD). That’s an enormous potential market due to the increase of AMD in an aging population.

Meanwhile, clinicians are screening people with retinitis pigmentosa to develop a selection protocol for the first group of patients who will participate in tests of the BVA device in 2013.

Prof. Burkitt told mivision that the possibility of developing new technology to help patients is very exciting. “With the cochlear implant, it is amazing to see that moment when the implant is turned on – and people who can’t hear, hear sounds for the first time. I’m looking forward to that moment with the bionic eye.”