Saving Sight in Sumba: An Island Lost in Time 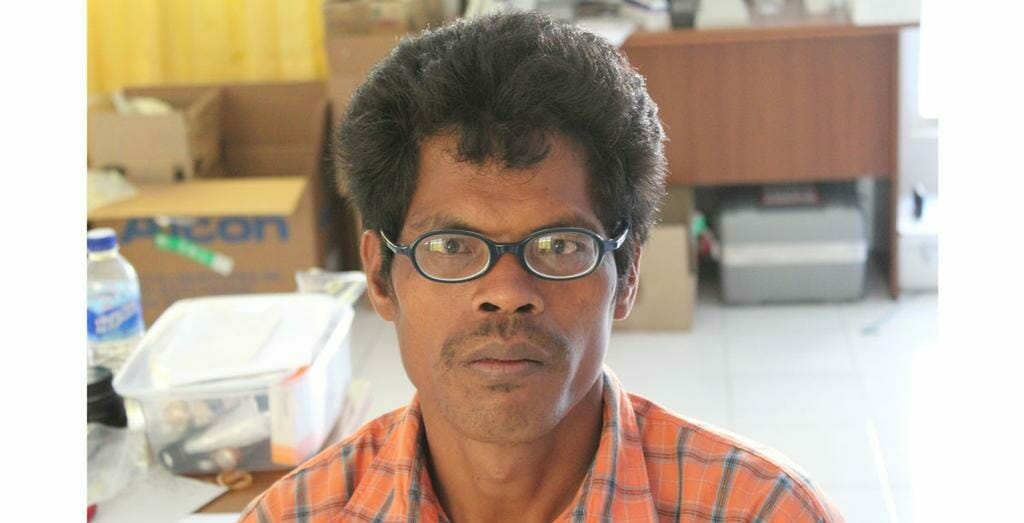 With a reputation of being perhaps the most mysterious of Indonesia’s major islands, Sumba is truly “off the beaten track”, and rarely visited by westerners.

Those that do feel as if they’ve stepped back in time – the island’s 650,000 residents are largely Christian animists, whose spiritual rites include animal slaughter and the construction of impressive stone burial monuments.

The people are desperately poor and have little or no access to basic services, including eye care, but a dedicated band of Australian eye care professionals is doing what it can to change that, proving that when you’re determined to do something, things seem to fall into place.

For Melbourne optometrist Peter Lewis, the defining moment of his last trip to Sumba was watching the change in circumstance of a frail elderly woman.

Brought in from an outlying village to the eye camp in the town of Waikabubak, this lady was totally blind and “35 kilos wringing wet”, Mr. Lewis recalled.

It is such a simple thing, to receive spectacles, so for a relatively small investment, you can change
someone’s future

She could barely traverse the rough ground outside the clinic, slowly feeling her way with a cane. After a successful operation on one eye, she returned the following day for a second operation on the other eye.

“It was amazing to see her stick the cane under her arm and race off to the operating theatre on her own,” Mr. Lewis said.

Then there’s the little boy he met last year. One of about 11 in his family, the child was offloaded to another family with a similar number of children. Completely blind, he was led around by someone. Always last in line for food, he was, in Mr. Lewis’ words, “thin, scraggy, small and scared”.

With his sight restored in one eye after a cataract operation, the boy returned the following year for a second cataract removal a completely different child, “he was taller, he had grown up and had some fat on him”.

The story of the Sumba Eye Program is one that is characterised by the determination of the team involved to simply ‘make it happen’ despite the logistical challenges the island presents.

Mr. Lewis, fellow optometrist Peter Stewart and Melbourne ophthalmologist Mark Ellis had been doing eye care work in East Timor, but in 2007, riots forced a change in plans and they headed to Sumba instead.

The trio now forms the backbone of a regular mission to Sumba, supported by the US-based Sumba Foundation, Optometry Giving Sight, the Royal Australasian College of Surgeons, and Rotary clubs in the Melbourne suburbs of Kew and Glenferrie.

Mr. Lewis said the latest trip, in June this year, consisted of two nurses, two ophthalmologists, three optometrists (including a specialist pediatric optometrist) and four self-funded volunteers. The Sumba Foundation also provides a team on the ground, which helps to identify and transport patients from outlying villages.

“Going to Sumba is quite a step back in time. They are mainly Christian animists, and up until quite recently, there were headhunters on the island.

“Transport on the island is a real issue. Getting people anywhere takes a lot of effort and coordination. To get people in from the outlying districts, the team from the Sumba Foundation gets a tip truck to bring them in. In the wet season, the roads are shocking and patients can’t get to you at all,” Mr. Lewis said.

The team has to bring everything in itself so carrying up to 45 pieces of luggage is not unusual.

The team spends 10 days on an eye care mission, but half of that time is spent in travel and setting up the eye camp, which is based in Waikabubak hospital. In the remaining five days of the latest trip, the team performed nearly 100 eye operations – mostly cataract extractions – screened 832 patients, dispensed just over 700 spectacles and 100 pairs of sunglasses.

Ophthalmologist Mark Ellis said, for him, the cooperation between the two fields of optometry and ophthalmology is a huge benefit of the program.

“We have a great camaraderie, and a great appreciation of the hard work that is put in by the others in the team,” Dr. Ellis said.

Mr. Lewis agrees, saying that by working so closely with each other, he’s found the optometrists and ophthalmologists who have taken part in the trips have developed a deep professional understanding, as well as enduring friendships.

While the pair can’t speak highly enough of the organisations working in partnership with them, Dr. Ellis says the Sumba Eye Program, is very underfunded. Each trip costs between AUD$30–40,000 and is a “logistical nightmare”, with Dr. Ellis saying he feels like he’s in “constant fundraising mode”.

Despite the difficulties, the Sumba Eye Program has ambitious plans to expand, hoping to increase the number of trips to the island to two a year.

But Mr. Lewis said, even that, is like “grains of sand” when compared with the desperate need and the team is working to find and train an eye care nurse, to remain on the island.

Dr. Ellis said, in the meantime, local doctors have come up with innovative solutions to the lack of a resident eye care professional.

“In this modern age, I can keep up with what is happening via SMS. Staff from the Sumba Foundation will follow up on my patients, take photos and send them to me.

“Sometimes, they’ll see a problem and take a photo and I’ll try to give a diagnosis on the phone. We can do a lot of things over the internet and phone,” Dr. Ellis said.

Both men say the impact on patients’ lives is nothing short of astounding; Dr. Ellis calls them the “glamour cases”. One such case involved three men – all brothers and a small girl.

“Our pediatric specialist, Norm Russo, saw this one little girl who was very short-sighted. She had -10 myopia,”
Mr. Lewis said.

“Then we saw her father, he was -18. We gave them some specs and will send back a proper prescription.

“The next day, in comes the girl’s two uncles. They’re both -18. The whole family is myopic. They came from a village two hours away (from the eye camp); they’ve never had spectacles. I don’t know how they survived because they couldn’t see past their noses.

“It’s just amazing stuff. My own daughter is -6 and I know how debilitated she is without her spectacles. These men are -18! When we go back we hope to see the rest of their family,” Mr. Lewis said.

Volunteering
Both Dr. Ellis and Mr. Lewis emphasis that the trips to Sumba are no holiday: they’re hard work.

“We’re doing surgery back to back, and if we had more funding, we’d could take a third surgeon on each trip,” Dr. Ellis said.

Daliah Moss, from the Royal Australasian College of Surgeons, which helps the Sumba Eye Program with logistical support, describes the program as life changing.

“It is such a simple thing, to receive spectacles, so for a relatively small investment, you can change
someone’s future.”

She said the best way to get involved in overseas programs was to “speak to someone who is already involved” but Ms. Moss warns that volunteering for an overseas eye program is not for everyone.

“It’s always good to get new volunteers. We try to match them with an old volunteer. Some people don’t cope very well; others thrive and want to come
back for more,” she said.