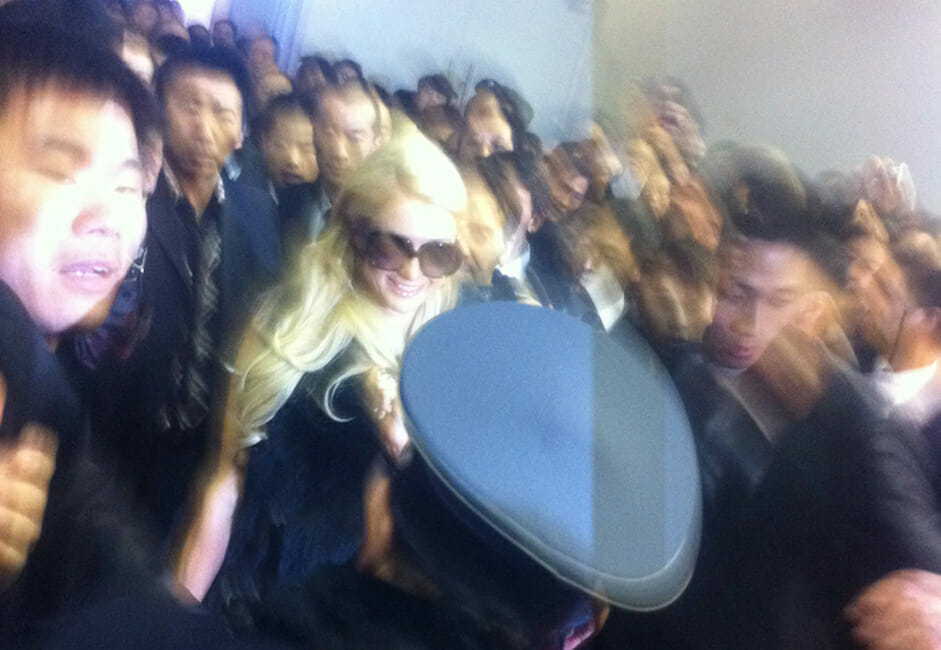 Covering optical trade shows usually isn’t considered a contact sport. That is, unless Paris Hilton sweeps by, as she did at this weeks Shanghai International Optical Fair, with a retinue of Chinese security.

Ms. Hilton’s unexpected appearance on the first day of the three-day fair, to launch a new range of sunglasses, led to a near stampede as hundreds of people swarmed to catch a glimpse of her.

The Shanghai International Optical Fair is loud, chaotic and exciting. With an exhibition stretching over 60,000 square metres housing almost 4,000 booths, the fair attracts buyers from 21 countries and regions. There are people everywhere. Men are pressing bags, filled with pamphlets and brochures, into your hands. There are lines of women marching through the halls carrying advertising placards … they’re dressed as princesses and sucking lollypops; in bridal wear; in bunny ears; or in tiny gold dresses. There are ballet dancers. In the central hall, a drum group is encouraging visitors to take their place in the drum circle and their beat is a constant aural backdrop.

Throw in a woman famous for being famous, and it’s game on.

The first indication something was up was the line of uniformed security men that sealed off one of the corridors of Hall One of the Shanghai World Expo Exhibition and Convention Centre, which houses the prestigious international brands.

Behind those guards, in their dark uniforms and hats, stood a row of burly plain-clothes security in black suits and white gloves… I counted about 60 men in black in a space no bigger than three by five metres.

Of course, the mass of security guards attracted a crowd, eager to find out what was happening.

Like me, many guessed that the security presence signaled a possible visit by the blonde socialite. But equally obvious, was the fact that many in the crowd did not know who she was, as evidenced by an overheard conversation in broken English between Chinese and French visitors to the show.
Chinese woman: ‘Who is she?’ French man: ‘She is famous for making a home movie.’

As we waited, unsure of what was to happen next, and wondering about the wisdom of standing so close to the obvious epicentre of whatever it was that was going to happen, the tension among the men in black suddenly increased. They held hands, forming a solid wall of black suits. Harsh commands were issued in Chinese over two-way radios. Then we were literally swept off our feet, as the Chinese security presence rammed us backwards and to one side, allowing Paris Hilton to sweep in, surrounded by an entourage, flanked by cameras and yet more security guards.

She seemed a little overwhelmed. Why wouldn’t she be? I certainly was, and she was at the centre of the storm; I was just at its periphery. It was frightening to feel so powerless. The double layer of these men in black closed ranks and just swept the crowd back with incredible and unexpected force.

It felt like I was in strong surf, unable to swim. As the surge passed, I looked around for my friend, Sharon; she had been right by my side but I had lost her in the crush of security men and Chinese optical buyers. I found her shaking, crouched in almost a foetal position against a nearby wall, clutching her handbag to her chest.

Ms. Hilton must have been in the Paris Hilton display stand for about 10 minutes. Long enough to meet some specially selected Chinese fans and pose for a few photographs, then the wave of security repeated itself, this time in reverse. While she had looked a little overwhelmed going into the stand, Ms. Hilton had clearly regained her composure on the way out, smiling and doing tiny little-girl waves to the tightly packed crowd, while an equally blonde member of her entourage filmed the chaos on a mobile phone.