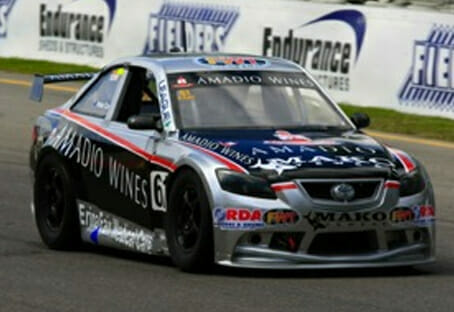 The FW1 Aussie Racing Car Series is one of the most thrilling and exciting motorsport categories in Australia. As a major support category to the V8 Supercar Series televised on Network 7, the series travels all over Australia, including rounds this year at Adelaide, Phillip Island, Townsville, Winton in country Victoria, Bathurst and the Gold Coast.

The cars are a scaled down version of the V8 Supercars and are synonymous with five wide overtaking battles, major slipstreaming duels and spectacular crashes. They use a 1300cc Yamaha motorbike engine, and all the cars are identical. They often have over 40 cars racing at the one time.

At the 2012 Clipsal 500 in Adelaide Mako Eyewear teamed up with Peter Carr in his number 61 Toyota Aurion. Peter Carr is one of the front-running drivers, winning more races in 2011 than any other driver and placing third in the series. “I have had some great races in these cars and I now have a lot of experience,” he said.

“We often have celebrity and well known race drivers come into the category and they all find the cars a struggle to get to grips with. To drive these cars fast you must be able to push the car and yourself to the absolute limit, and sometimes over it!”

Teaming up with Mako Eyewear for the Clipsal 500 in Adelaide was a perfect partnership for Peter Carr.

“Mako Eyewear are specialists in their field of polarised lenses. They make some of the best lenses in the world. My entire team were decked out in the latest spec glasses from Mako, which certainly drew the attention of many on-lookers. The clarity and vision out of the glasses is incredible and the styling is first class. I wouldn’t be able to count how many of the other drivers and crew asked if I could get them a pair,” he said.

Peter Carr is a business person by day and race car driver by weekend. Peter is the owner and manager of two medical centres, one located in the Sydney suburb of Carlingford, the other on the NSW Central Coast. “Being a professional business person myself, it has been great teaming up with the crew from Mako Eyewear. The business is at the forefront of eyewear technology and is an extremely professional corporation. Seeing some of their designs and ideas for the future is very exciting. The flexible non-breakable technology of their glasses is just amazing, I wish I could incorporate that into my race car! It would certainly reduce the repair bill after a crash!”

At the 2012 Clipsal 500 event Peter Carr had the Channel 7 on-board camera on his car. This generated some great footage and exciting branding for Mako Eyewear. “Having the on-board camera always ads a bit of extra pressure, as you can’t hide from any of your mistakes”. Luckily Peter didn’t make too many though and came home 3rd outright after the four races. “With five rounds of the series to go it is great to get a solid first round. It now puts me in a great position to fight for this year’s championship. I look forward to putting the Mako Eyewear Aussie Racing Car in that number 1 position”.

It won’t be easy to take that number one position however, as two of the past champions are back to defend their titles. But with Mako Eyewear in his corner Peter feels that this could be his year. “I certainly feel that I have a psychological edge. Just the intimidation alone of all my team decked out in the Mako Eyewear has the other teams on their toes, and the car looks spectacular”.

The next round of the FW1 Aussie Racing Car Series is at Bathurst on April 6-8. Look out for the number 61 Mako Eyewear Aussie Race Car.