Carrera Launches ‘After all no regrets’ Ad Campaign 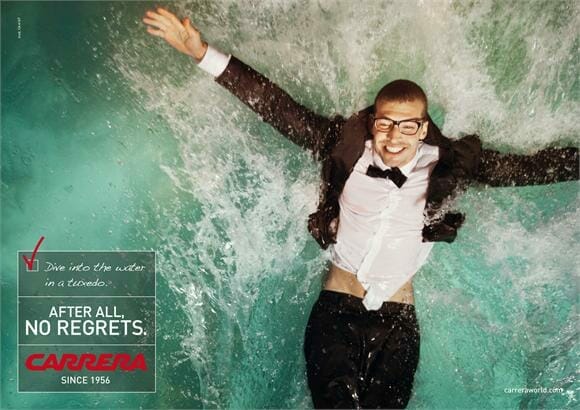 “Dedicated to young people who enjoy good, clean entertainment, and know how to live life to its fullest” is the key message of Carreras latest ad campaign.

Conceived and developed by the D’Adda, Lorenzini, Vigorelli, BBDO agency, the new campaign maintains the headline ‘After all no regrets’, showcasing new amusing and thrilling situations, where Carrera glasses are the sole protagonists.

Carrera says the new pictures, which are based on web, blog and social network feedback, “depict the online Carrera generation’s wish list, a new list of things to do to live life with no regrets.”

Alongside the advertising campaign, is a video that also clearly conveys the brand’s philosophy.

The worldwide advertising campaign, that has just kicked off in Australia, will appear in newspapers, magazines and online. Carrera anticipates it will “naturally and rapidly” spread across the Internet thanks to the use of social media networks, a targeted banner campaign, web presence on search engines and the brand’s official website carreraworld.com.

Check out the new Carrera campaign on carreraworld.com. Carrera is distributed in Australia by Safilo 02 9540 0555.

The Most Influential Optometrist of our Generation Awarded