Lasers Distracting and Dangerous to Wallabies 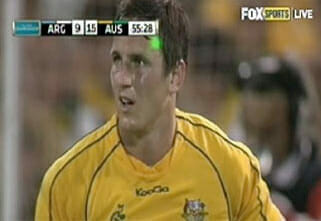 High powered green lasers couldn’t stop the Wallabies from a win over Argentina recently, but they had the potential to put a halt to the players’ sight, writes Professor Gerard Sutton.

A couple of weeks ago, I was watching Australia playing the Pumas in Rosaria Argentina. It was a massive challenge for the Wallabies, coming after a crushing defeat at the hands of the Springboks the week before, and suffering an unprecedented injury toll.

Somehow Coach Robbie Deans managed to get a team on the park. The Argentineans were favourites, not least because of the expected influence of a strongly passionate and partisan crowd.

The Wallabies turned up and showed a character that often can only be forged in adversity. It was a great and deserved win for the Wallabies.

While home crowd support is an important part of the game that creates cauldron-like atmospheres, the use of a laser to distract the Australian goal kickers was totally unacceptable.

Each time kickers Mike Harris and Kurtley Beale attempted a goal-kick, a spectator would attempt to distract him by shining a green laser in his eyes.
Apart from the obvious poor sportsmanship, this behaviour is dangerous.

Although low energy lasers are safe, the high powered green lasers that can be easily purchased on the internet are potentially hazardous to the eye. There have been a number of reported cases of these high-powered green “pointer” lasers causing permanent eye damage. In an article published in the prestigious New England Journal of Medicine, a young boy who bought such a laser on the internet lost sight after shining the laser into a mirror and into his eye.

The risk with commercially available “pointer” lasers is very small. The energy levels at <1mW mean that to cause any damage the recipient must stare at the laser for some time.

Unfortunately high energy lasers are available over the internet with energy levels up to 700mW and may produce immediate and severe retinal injury.

Hopefully we will not see a repeat of this behaviour, but sporting teams, organisers and the management of sporting venues need to be aware that the risk remains.

In future if this happens, the game should stop until the perpetrator has been found or discouraged.

A sad codette on what was a marvelous victory for Australia and a great first rugby championship for Argentina. Ironically the local Argentine hero Rodrigo Roncerro, who was playing his last game for Argentina, is a doctor. I don’t think he would have approved of his countryman’s behaviour.

Professor Gerard Sutton is Professor of Corneal and Refractive Surgery at the Save Sight Institute, University of Sydney. He is a consultant to the Royal Australian Navy and is on the editorial board of the journal Clinical and Experimental Ophthalmology. His previous appointments include the Inaugural Corneal and Refractive Fellow at Vision Eye Institute, Chatswood in 1994, Chief Ophthalmologist for the Sydney 2000 Olympics, chief surgeon in New South Wales for the Artificial Cornea project in 2002 and a member of the Australian Council of Healthcare Standards for LASIK in 2002-2005.