Banking on DNA: Unlocking the secrets to Inherited Retinal Diseases 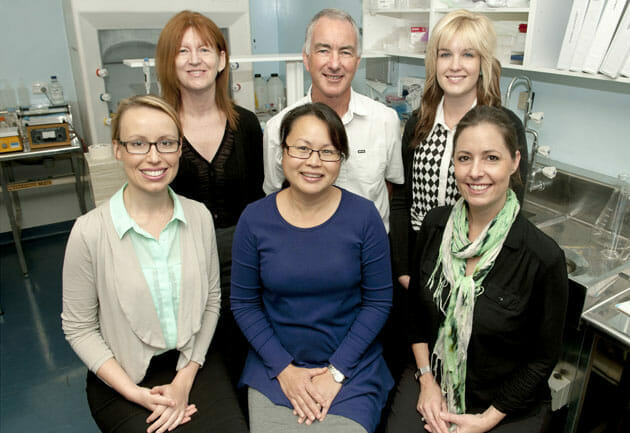 Somewhere in a database created by Perth’s Sir Charles Gairdner Hospital are the genetic clues to understanding, treating and possibly finding cures for some of the world’s most debilitating eye diseases.

In 1984, researchers at the Sir Charles Gairdner Hospital, with funding from Retina Australia WA, began gathering data on Western Australian families with a range of inherited retinal diseases (IRDs).

Today the Inherited Retinal Disease Register now incorporates a DNA databank and has morphed into what the Hospital’s Principal Medical Physicist, Dr. John De Roach, describes as a “magnificent database” of “international importance”.

While the database is a researcher’s dream-come-true, it is right now providing crucial diagnostic tools for ophthalmologists. As well, it ensures genetic counsellors have the necessary information to help people with IRD as they make important life decisions.

Dr. De Roach is talking about the Australian Retinal Inherited Disease (IRD) Register and DNA Bank, which has taken on the responsibility of progressively analysing stored DNA samples in an attempt to identify IRD-causing mutations.

The work began in 1984, before the introduction of genetic technology, when Retina Australia’s WA branch began funding a simple register of Western Australian families with IRD.

In 2001, with genetic science in its infancy, the register began collecting DNA samples. “We collected 25 samples in that year, and slowly continued until 2009, when Retina Australia (the national body) got interested in us,” Dr. De Roach explains.

With a commitment of AUD$1.5 million over four years from Retina Australia,the DNA databank took on a national jurisdiction and inherited DNA samples collected by a number of private ophthalmologists.

Dr. De Roach now finds himself the custodian of information on more than 5,200 people affected by an IRD or their family members, as well as approximately 4,000 DNA samples from people across Australia.

Retina Australia President Mr. Graeme Banks said it was hard to overestimate the importance of the DNA database.

“It is a vital service. If I have any regrets, it is that we did not start long before we did,” Mr. Banks said.

He said his aim would be to have as many IRD sufferers as possible to contribute to the project.

Dr. De Roach estimates that the register now stores DNA from approximately 20 per cent of all Australians with IRD. And as Mr. Banks points out, the register stores data “not only for the person with the problem, but also selected blood relatives”.

He said while participation in the project was voluntary, “I don’t know of anybody who has said no”.

“There are a lot of people out there in the community with IRD who have not given samples, but many of them wouldn’t have been diagnosed yet. The traditional thing, after diagnosis, is to go into denial, but then they eventually accept the need to be involved,” Mr. Banks said

The register also receives referrals for other retinal diseases, with the exception of age-related macular degeneration (AMD).

Dr. De Roach said approximately 200 different genes had been identified as being involved in IRD, which affect approximately one in every 1,500 people.

As well as the DNA samples – which are held in two separate locations to ensure their safety and integrity – information within the register includes detailed results of electrophysiology tests, psychophysical measurements and ophthalmic examinations, demographic information, family and clinical data (best known diagnosis being a crucial item), and details of genetic analyses undertaken and genetic information gathered, including the defect causing the disease within each family where this has been established.

As expected, it takes far longer to analyse than collect the samples, so Dr. De Roach said the Register was now concentrating on analysing the DNA it has already collected. He estimates only one fifth of the DNA collected has so far been sequenced.

Mr. Banks said, predictably, analysis of the samples was expensive. Retina Australia branches across Australia and nationally had raised funds for the DNA project “through sheer hard work”.

“We would very much like to get federal government funding,” he said.

Mr. Banks said Retina Australia had made “three unsuccessful overtures to the current federal government” and lobbying of the federal opposition was underway.

Dr. De Roach said the Register has become a valuable research tool, with DNA and other relevant supporting information made available to approved researchers interested in studying the varied genetic causes of IRD.

“Some subjects in the Register may be of interest to scientists and clinicians – both in Australia and overseas – who are designing clinical trials or providing therapies,” he said.

When that happens, the Register contacts the subjects, to gauge whether they want to take part in the research trials.

“For example we have eight families with choroideremia (a rare disorder that causes progressive vision loss due to degeneration of the choroid and retina). We are still analysing their samples… but the next step will be to get them on clinical trials overseas, or lobby for clinical trials here,” Dr. De Roach said.

He said the database had also been used by organisations like Bionic Vision Australia, which had contacted the Register, to find suitable candidates for its work.

Mr. Banks said the current research on gene therapies was exciting and “in the not too distant future” participants in the project “stand some hope of being treated” for IRD.

Dr. De Roach said a vital part of the service was a free “report back” service.

“Because of the support from our hospital (Sir Charles Gairdner) and because Retina Australia has put millions of dollars into this… when a person with IRD is referred to us, as results are obtained for a participant, we offer to report back to the ophthalmologist or genetic counselling service at no extra charge.

“There will often be little significant benefit to a patient as a result of their participation in this project,” Dr. De Roach said. “However, if we identify the genetic mutation causing their IRD, we will offer to report that result back to them via their nominated ophthalmologist or genetic counselling service.”

He said, in some cases, ophthalmologists found it difficult to diagnose IRD, “but if we can send them a molecular diagnosis, then its game, set and match”.

Mr. Banks said early diagnosis of IRD was immensely important because often appropriate treatment in the early stages of IRD could delay deterioration of sight.

Retina Australia’s Mr. Banks said most calls coming through to Retina Australia’s support line related to the impact of IRD on family planning, and the information conveyed by the Perth-based service often helped.

“A significant number of calls (to Retina Australia’s support line) relate to a family situation. They’re asking ‘what are the chances, if I have children, that they would carry the disease or I would pass it on?’.”

Dr. De Roach said, “to date, most of the recruitment for this project has been done by Retina Australia.

“We now wish to invite the wider Australian vision carer community to consider recommending to appropriate patients that they contact us if they wish to participate in this project.”

Further information and contact details are available from: www.irdregister.org.au.

To date, most of the recruitment for the Australian Retinal Inherited Disease (IRD) Register and DNA Bank project has been done by Retina Australia.

Dr. De Roach says said they now wish to “invite the wider Australian vision carer community to consider recommending to appropriate patients that they contact us if they wish to participate in this project.”

Interested ophthalmologists will find out more about the Australian Inherited Retinal Disease Register and DNA Bank can go to: www.irdregister.org.au