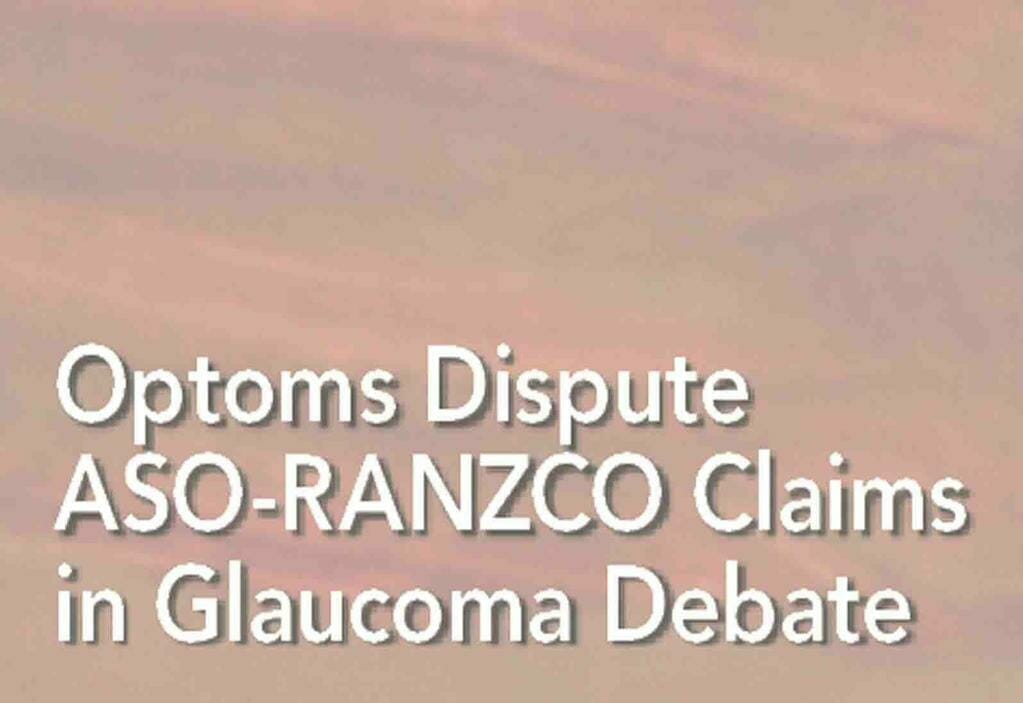 The battle over who should treat glaucoma, between the Optometry Board of Australia (OBA), Optometrists Association Australia (OAA), the Royal Australian and New Zealand College of Ophthalmologists (RANZCO) and the Australian Society of Ophthalmologists (ASO) continues to intensify. A hearing date, which was expected to be set at a short directions hearing at the Supreme Court on 29 July was deferred until 30 August.

In the meantime, several optometrists have contacted mivision to express their disappointment in the current impasse and to dispute claims made by ASO-RANZCO in an open letter paid advertisement published in the August edition of mivision.

Dr. Alan Burrow, an optometrist from Coffs Harbour, disputed the assertion in the open letter made by Dr. Best and Dr. Karagiannis that “there is a public expectation that treatment of medical conditions should be overseen by medical practitioners.

“My experience has been that a certain number of patients are comfortable being treated by an optometrist. This is especially true in cases in which the ophthalmologist has a very limited consultation time which prevents a comprehensive explanation of the condition and details of the treatment protocol.” He said patients who prefer to be treated by an ophthalmologist usually request a referral – either from their optometrist or GP.

He said “it is inconceivable” that GPs, who are extremely unlikely to have the necessary equipment or training to treat glaucoma, have long been able to prescribe glaucoma medications unsupervised and yet if ASO-RANZCO has its way, therapeutically endorsed optometrists will not be able to do so.

“In my experience, the vast majority of GPs recognise their limitations and general lack of understanding of ocular conditions including glaucoma. However, GPs can and do prescribe glaucoma medications, usually in order to assist patients who have experienced difficulty consulting an ophthalmologist. For example, a patient I referred to an ophthalmologist for glaucoma treatment in 2002 consulted me recently for an optometric assessment. When I noted that his pressures were high (28 mmHg), I enquired whether he was being treated. He stated that he had been treated by a number of GPs, without seeing an ophthalmologist, having a visual field or intraocular pressure measurement for 9 years! The pressure was reduced to 14 mmHg by changing the medication. This is not an isolated incident,” he said.

Dr. Burrow said the assertion made by RANZCO and ASO that optometrists only undergo 50 hours of therapeutic training is grossly misleading.

“Reference is being made specifically to the requirement that optometrists undertaking the Graduate Certificate in Ocular Therapeutics (GCOT) are required to spend 50 hours with an ophthalmologist. While this time can be valuable, it forms only a minute part of the overall training,” said Dr. Burrow.

“Having served as a member of the Optometry Council of Australia and New Zealand (OCANZ) accreditation team and having employed new graduates from two universities, I can state categorically that optometrists do have in-depth training in ocular pathology and related topics e.g. general pathology and pharmacology.

Furthermore, there is extensive training in the use of diagnostic techniques including digital imaging,” he said, adding that there appears to be a general lack of comprehension by the ASO and RANZCO of the training received by optometrists.

He said the claim that optometrists would be unable to treat glaucoma effectively because they are unable to perform laser trabeculoplasty was also unfounded. “As primary eye care practitioners optometrists provide advice on a wide range of conditions such as refractive and cataract surgery, which they onward refer for treatment. Trabeculoplasty would fall into the same category.”

He said for some reason there seems to be a fear that optometrists who are able to prescribe glaucoma medications will run amuck. “Optometrists have been prescribing therapeutic agents in Victoria since 2001. I am not aware of any report raising concerns about widespread misuse of the privilege,” said Dr. Burrow.

Dr. Burrow said he has the greatest respect for the many ophthalmologists he has interacted with over many years, particularly those he has worked with on a regular basis, who have assisted him in developing his clinical skills. He said he remains optimistic that issues will be resolved.

“I firmly believe time will demonstrate that many of the concerns expressed by ophthalmology will be found to be without foundation. While this issue has undoubtedly served to disturb the official relationship between optometry and ophthalmology, it is important to emphasise our common goal of reducing visual loss by improving early detection of this complex disease.

“There can be no doubt that interaction between optometrists and ophthalmologists will lead to superior patient outcomes… Cooperation, interaction and a cordial relationship between ophthalmology and optometry is essential for provision of an efficient and effective eye care service.”