WAVE13: A Destination for Quality Education 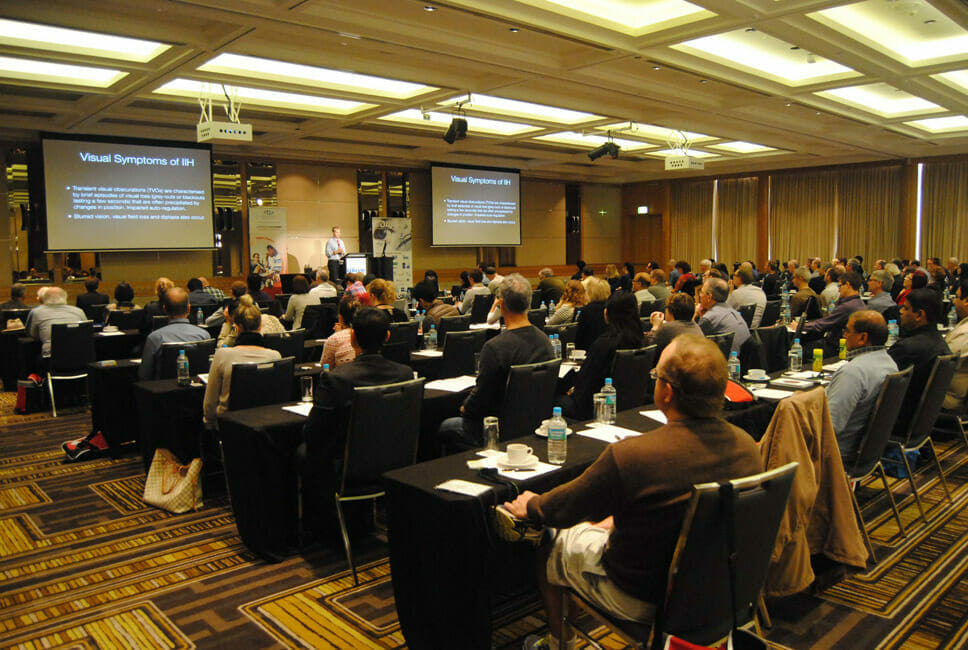 (Click Here to view all the images from this event)

With a new, more intimate venue and engaging, knowledgeable speakers, Western Australia’s WAVE has been declared a success, attracting more than 170, mostly Western Australian delegates from all areas of the State.

Outstanding speakers and great opportunities for local optometrists to network were the highlights of WAVE 2013 for conference organiser, Tony Martella of the Optometry Association Australia’s WA division.

“We are extremely pleased from both a delegate and an exhibitor perspective,” Mr. Martella said of the two-day event, held on the weekend of 10–11 August in Perth’s Pan Pacific Hotel.

While these numbers were “down a tad” on previous years, Mr. Martella said the conference lineup was first class. WAVE was worth up to 43 CPD points for those in attendance. A lecture series of short, sharp and detailed presentations was supplemented by clinical workshops.

Dr. Ang is a consultant ophthalmologist at the Lions Eye Institute and Royal Perth Hospital. She has recently returned to Australia after undertaking two prestigious fellowships in Cornea, Anterior Segment and External Diseases in the USA and Singapore. Dr. Ayton is a clinical research coordinator at Bionic Vision Australia and a clinician at the Centre for Eye Research Australia.

Mr. Martella said both speakers were extremely talented. “Their topics were interesting… they were very knowledgeable and experienced”.

“I love the questions at the end of the lectures – they’re concise and you have a time limit. The winning one (presentation) was Andrea Ang… she captured my attention from the first minute, right to the end. She was the stand out, but I shouldn’t take anything away from most of the others… I’m very happy with the content.”

Mr. Kalnenas said he would probably walk away with about 37 CPD points from the conference “but I will make up the rest with mivision magazine”, he said.

Melbourne optometrist Jessica Chi was presenting at the conference, with two contact lens workshops. She said she was surprised by the amount of new material presented at WAVE.

“I think it’s been a really good conference. Quite compact. Intimate… I’m impressed they have been able to present new research that I haven’t heard of otherwise,” she said. “I’ll definitely be back…”

For the first time, the conference had switched from Perth’s Convention and Exhibition Centre to the Pan Pacific Hotel – a move that suited most exhibitors spoken to by mivision.

“We find that the Western Australian show, in particular, cares a lot about its suppliers, so we really appreciate coming here,” Michael Nasser, the National Operations Manager of Opticare told mivision.

“It is a fantastic opportunity and really beneficial as we can engage with our Perth clientele… we have a new office in (the northeastern Perth suburb of) Morley… there’s a few things happening for us here.”

Likewise, Provision Chief Executive Officer Steven Johnston, said the trip across the Nullarbor was definitely worth the effort.

“For us it gives the opportunity to interact with a good cross-section of our membership in one place. We also… get out to see members in the regional areas to make it a worthwhile trip across to WA, so if you didn’t have WAVE, you’d almost have to concoct a reason to come over… we have our two trade events in April and October and this falls in between the two, so it gives us three reasons to come to WA and connect with virtually all of our members,” Mr. Johnston said

He said while Provision had only 22 members in WA, it was a “great opportunity for growth”.

Bausch and Lomb National Sales Manager Rhonda Keen said WAVE was well attended by optometrists from remote and regional WA. Of her first WAVE, Ms. Keen said she was “generally impressed… we’ve had lots of interest and a fantastic response to our product launches”.

Mr. Martella said the OAA was considering expanding the social aspects of the program for WAVE 2014, to make the conference “more of a destination”.

“It’s a great chance to network and it (WAVE) attracts the best of the profession in Western Australia. You can network with others and see what is on offer in the exhibition hall. WAVE provides the local profession with the ability to support a local event,” Mr. Martella said.