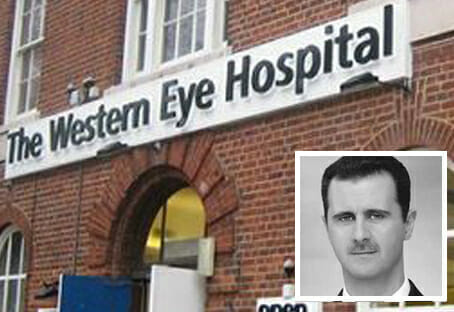 Ophthalmology was supposed to be the calling of the Syrian President Bashar al-Assad. Instead he stands charged with using chemical weapons to kill more than 1400 of his own people, among them over 400 children.

The 6’2 tall impeccably groomed President was educated at the Arab-French al-Hurriya School in Damascus. After high school, he studied medicine at Damascus University and went on to work as an army doctor.

Bashar al-Assad attended post-graduate studies in ophthalmology at the Western Eye Hospital, part of the St. Mary’s group of teaching hospitals in London. In 1994, when Bashar’s brother (who was heir apparent to their father as President of Syria) was killed in a car crash, Bashar’s studies were terminated and he returned home to be groomed as a future leader.

When it comes to killing, Assad is said to have learned from his father and dictator, Hafez al-Assad who in the early 1980s responded to a Muslim Brotherhood-led uprising by killed thousands of civilians.

Let’s hope this almost-ophthalmologist will open his eyes to the pain and suffering he continues to cause, bow to the pressure of the United States and hand over those weapons of mass destruction.