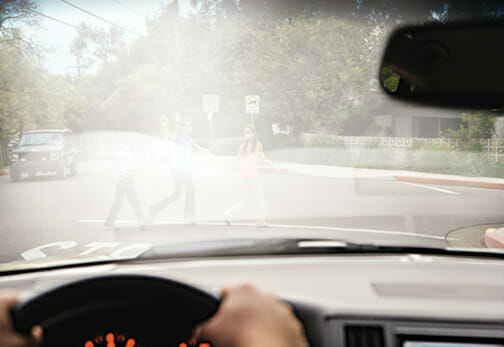 We spend a lot of our time on the road – whether it’s a short trip across town or a long journey across the country for the summer holidays. With the sun beating in through the windscreen, eyes quickly fatigue, reaction times slow and accidents occur. With so many drivers wearing eyewear not suited to driving, here’s a look at the options available that will make a difference.

Blinding glare caused by low sun, or by bright light reflecting off puddles, the car in front, or even your own bonnet can be potentially fatal, particularly for those driving at speed on an open road.

Frequently cited as the cause of road traffic accidents, glare can be lethal, however, it doesn’t need to be this way, because the right pair of sunglasses can prevent an accident from occurring.

Sunlight has an unpleasant way of reducing contrasts because daylight has a high portion of scattered blue light, which superimposes itself on the other colours and leads to low-contrast vision.

For the majority of customers, these commutes occur most often when the sun is at a low point and therefore delivering maximum glare…

Patients are acutely aware of the effects of glare, and it is a common complaint, even for people who could be considered to have ‘good’ vision. A recent study asked subjects to rate their visual acuity in the presence of different intensities of glare. When compared to their actual visual acuity, people’s estimation of their visual acuity decreased markedly as glare increased. In other words, people tend to focus more on the discomfort felt by glare, and feel that it reduces their vision more than we can actually measure with clinical tests.1

There’s a common misconception that the sun is at its most glary when it’s highest in the sky. However that’s simply not the case. The most dangerous times of the day (in terms of glare from the sun) are around 10am and 4pm, when the sun is low to the horizon and hitting the eye at an angle. According to research conducted by Japanese researcher Sasaki in 2011, the most dangerous seasons for the eyes are spring, autumn and winter.

People also mistakenly believe the sun has to be bright to cause damage. In fact, regardless of whether the sky is clear and blue or grey and cloudy, UV rays will cause harm.

According to Professor Minas Coroneo of the University of New South Wales, that’s because light actually intensifies as it passes through the eyes, in what he has termed the peripheral light focusing effect (PLF).

In his research, Prof. Coroneo concluded that light is 22 times stronger at the outer edges of the eyes and eight times stronger at the inner edges of the eyes. These are the most common places for eye diseases such as pterygium (a thin tissue over the white part of the eye) and cataracts to develop – and both are associated with chronic UVR exposure. This exposure comes from the light that shines through the sides of sunglasses or reflects off the back surface of sunglasses into the eyes.

A Good Lens Will Block the Glare

A good sun lens will block out harmful UVA and UVB rays and reduce the blue light portion of sunlight to an optimum level. As a consequence, objects will regain their contrast, and colours and details will have a natural look.

Importantly, your customers’ eyes will remain more comfortable as they drive, and so they will be more alert and ready to react to whatever may occur around them.

Thanks to advancing technology, there are many options available to recommend to your customers – from tinted polarised lenses through to variable tinted lenses that activate according to light and dark.

As discussed by optometrist Andrew Hogan, in the July edition of mivision, this class of variable tint lens, such as Transitions XTRActive lenses will often show a moderate level of activation inside a motor vehicle, because they are activated by both visible and UV light. The small amount of residual tint experienced when indoors can also provide an additional level of comfort to patients.2

Another class of variable tint lenses is the permanently polarised lenses that adjust from dark to darker, such as Transitions Drivewear and Essilor Xperio Transitions adaptive sun lenses. This combination of Transitions and Drivewear technologies is regarded as a premium option for driving. These lenses are darker to begin with, and are polarised and react to both visible and UV light, so they function extremely well behind a windscreen.

Being polarised, these lenses preferentially block reflected road glare. And because their tint density decreases in dimmer daylight conditions, they are significantly more versatile than standard prescription sunglasses, yet still able to perform the same functions.

As an eye care professional, you also have the opportunity to enhance your customers’ safety when they’re driving at night. According to the National Safety Council in the United States, traffic deaths are three times greater at night than they are during the day. That’s because “90 per cent of a driver’s reaction depends on vision, and vision is severely limited at night”.

Once the sun has dropped, depth perception, the ability to recognise colour and peripheral vision are all compromised. Drivers over the age of 50 are particularly affected and are estimated to need twice as much light to see as well as a 30-year-old.

Added to this the possibility of fatigue, which slows reaction times and the chance that other drivers on the road may have been drinking alcohol, and it’s easy to understand the need to provide your customers with as much protection as possible.

Anti-reflective coatings on prescription glasses are one way you can help customers avoid the blinding glare from on-coming headlights and street lights. Another measure is to prescribe a lens that compensates for the fact that pupil size changes according to light levels and in doing so, affect visual acuity.

With a smaller pupil, light rays are refracted in such a way that they intersect on the retina and a sharp image arises. With large pupils however, the light beams that meet at the edge of the pupil are refracted differently than those extending centrally through the pupil. The result is a blurred image on the retina.

Rodenstock has recently introduced the Impression 2 Lens, which compensates for this negative spherical aberration by taking pupil size into consideration, along with object distance and the customers’ age.

With congestion increasing, seemingly by the day, the hours we all spend behind the wheel on the daily commute to work, for school pick ups and sport is on the rise. For the majority of customers, these commutes occur most often when the sun is at a low point and therefore delivering maximum glare.

To provide your customers with the greatest level of protection when they’re behind the wheel, it’s important to talk to them about their driving habits – what time are they most likely to be out on the road, what sunglasses do they wear while they’re driving – can they bring them in to show you when they come for their next consult?

Then talk to them about glare, where it comes from, how it can impact comfort, fatigue levels, and reaction times… and present the options that will make them safer behind the wheel. When it comes
time to prescribe optical glasses, make the point that for those who spend time on the road, driving eyewear is not an option. It’s essential. 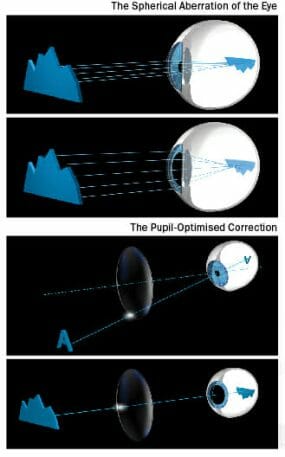 1. Balk, Stacey A. and Tyrrell Richard A, 2011, “The (In) Accuracy of Estimations of Our Own Visual Acuity in the Presence of Glare”, Proceedings of the Human Factors
and Ergonomics Society Annual Meeting 2011, 55:1210