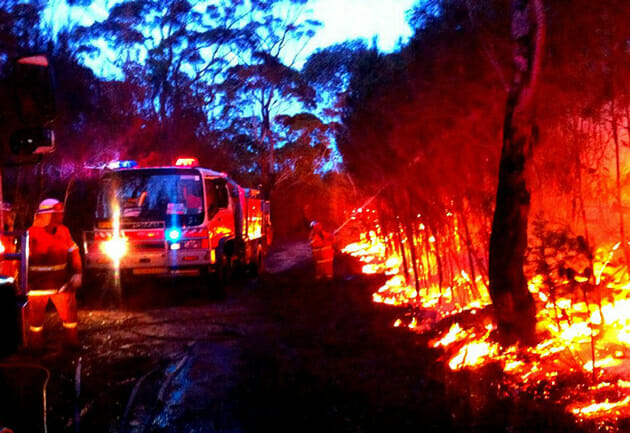 Bushfires raging through Australian townships this season have already stolen homes and lives. Mark Unsworth, Captain of the Ku-ring-gai Bushfire Brigade said in his 20 years of voluntary service he’s never seen anything like the devastation caused by the fires he fought in Winmalee in the Blue Mountains in October.He and his colleagues, along with residents of bushfire affected communities, are thankful for the efforts of eye care companies, which have contributed spectacles, contact lenses and lens solutions to replace items left behind during evacuations, and eye drops to ease discomfort caused by intense smoke.

Captain Unsworth told mivision that fighting fires and back-burning for hazard reduction can play havoc on the eyes. “Our guys are literally in the front-line where we have very concentrated smoke and smoke particles impacting our eyes.”

The impact of smoke from the October fires was felt right across the state with the air quality in Sydney reaching ‘hazardous’ levels. Air quality is considered ‘hazardous’ when the index is more than 200 – during the fires, parts of Sydney’s south-west had readings of more than 1,200.2

Associate Professor Colin Chan from Vision Eye Institute said some groups of people find the bushfire season less easy to cope with than others, from an ocular perspective.

“The smoke and ash falling will contain fine irritant particles. These will cause more irritation to people who already have reduced tear clearance, poor tear films or stronger inflammatory responses to environmental stressors. The people

at risk are, therefore, the elderly, dry eye and allergy sufferers and contact lens wearers and people whom have had recent ocular surgery.

The scars left on the landscape in the wake of the flames that ripped through parts of New South Wales will take some months, even years to recover. For some, who have suffered injuries and lost loved ones, homes and precious possessions the psychological scarring will take even longer to recover.

Optometrist Peter Merrington remembers only too well the psychological impact of bushfires that roared through his hometown of Gisborne in 1983. “My family was evacuated and I can remember coming into Gisborne the next morning. The towns I drove through on the way were pretty much destroyed and quite a few of the locals in Gisborne had perished. I went to the Council Chambers to help out and people were sitting there like zombies – they were in that state for a long period of time.”

Six years later, during the 2009 fires in Victoria, Mr. Merrington publicly offered victims of the fire free spectacles. He said the best advice he could give optometrists working in bushfire-affected towns was to give the people who walk through the doors time and compassion.

“Optometrists, particularly those in independent practice, are very used to spending time with patients and talking with them. I think they’re just going to have to do just that,” Mr. Merrington told mivision.

Mr. Merrington’s thinking is in line with experts in psychology. Following the 2009 bushfires, an article published on The Australian Psychological Society’s website by Associate Professor David Forbes MAPS, Clinical Director and Professor Mark Creamer FAPS, Director Australian Centre for Posttraumatic Mental Health and Department of Psychiatry, University of Melbourne primarily recommended “engaging with an affected person in a non-intrusive, compassionate and helpful manner”.

In the report, the authors wrote “how organisations and health services support those affected by the fires may have a lasting impact on individuals’ ability to cope” and although for most, the distress would begin to subside over the next few weeks, “the extent of the devastation was such that, for many it will be a long time before their lives return to normal”.

Optometrist Miranda Xu was working at OPSM in Plenty Valley, which was badly hit by the 2009 bushfires in Victoria. She said the people who came through the doors following the fires were emotionally traumatised. “They’d lost their homes, some were waiting to hear from family and friends. Some people wanted to share their stories, others couldn’t. The key learning for me was the need to show compassion and empathy,” she said.

Another optometrist who now works in the area said some of the people who were impacted by the fires back in 2009 are still suffering the psychological effects and one gentleman in the town of Whittlesea continues to endure vision issues as a result of an eye injury caused by the fire.

PFA is generally delivered by generalist health and disaster response workers, with support from mental health professionals and aims to a) promote sense of safety; (b) promote calming; (c) promote sense of self- and community-efficacy; (d) promote connectedness; and (e) instill hope.

Interestingly, when you think about it, this is exactly what optometrists working in bushfire affected areas are able to do. By providing time for people who want to talk about their experiences, by providing pro-active care, and ensuring patients have glasses, contact lenses, contact lens solution and eye drops, optometrists can help patients feel more physically comfortable, emotionally supported and more able to re-establish a daily routine.

In the aftermath of Victoria’s bushfires, Luke Cahill, Professional Affairs Director at Johnson & Johnson Vision Care traveled with a team of colleagues to the worst affected areas to dispense eye drops. “People had to leave their homes at the last minute so they’d lost everything – their glasses, contacts and solution. I remember one lady who had been wearing her over-night contacts for one week straight because she didn’t have any spare lenses or solution. It was a major relief for her when we gave her a lens case with solution.

In Plenty Valley, Ms. Xu saw similar cases. “One patient we say had a plus 8 prescription but he had rushed out and lost his glasses. OneSight was able to give him a replacement pair,” she said.

In the wake of the Blue Mountains bushfires in October, which destroyed over 200 homes, and wiped out 60,000 hectares of bushland, Gavin Bigland from Bigland and Cowley Optometrists in Springwood told mivision he’d had a trail of people coming into his pratice for assistance.

“A lot of people who’ve lost their homes are our patients. They’ve been coming in dribs and drabs for contact lenses or glasses. They look so despondent. We’re just trying to replace whatever they’ve lost at cost – we don’t want a profit. I don’t know what each patient’s financial situation is right now but I know they’ll have some big expenses coming.”

Mr. Bigland said he had secured assistance from eyewear suppliers.

“I’ve chatted to Essilor and Hoya and Domani frames, I’ll talk to more over the coming days – and they’re happy to help out by providing frames and lenses at minimal cost to the patients.”

Smoke in Your Eyes

Allergan stepped in to support fire fighters during the Blue Mountains bushfires, by donating over 1,000 vials of eye drops.

Captain Unsworth said the drops were a tremendous help. “I was out at Wilberforce trying to stop the State Mine Fire in October. It was midnight, I was on top of the tanker and my eyes were really irritated.

I grabbed a vial of drops the guys at Allergan had given us and the difference was amazing.

“It’s not just short-term relief – If you don’t treat your eyes properly, if you don’t use decent drops, your eyes can be red and irritated for days after fire-fighting.”

“Sometimes it looks like we’re in for a big season. You get a few big fires early on and you think it’s on for young and old. Then it fizzles, the rain comes and there’s nothing more.

“The amount of fire activity and the intensity of fires we’re getting already this season is unprecedented in my history. And realistically there’s nothing on the horizon to say it’s going to be any different for quite a long time. The season started early and it could be that we’re in for a very extended, severe bush fire summer,” he said.

For eye care professionals, Professor Colin Chan advised the message to patients is one of “common sense: avoid going outside, wear protective eyewear and use plenty of artificial tears to protect against and flush out any particle”.