The Art and Science of Ophthalmology RANZCO 2013 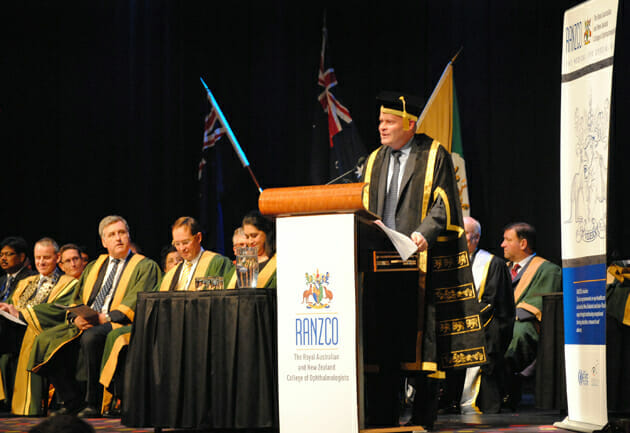 The seaside city of Hobart, Tasmania was home to researchers, ophthalmologists, ophthalmic nurses, orthoptists and practice managers from Australia and the world last month, as they met for the 45th Annual Scientific Congress of the Royal Australian and New Zealand College of Ophthalmologists (RANZCO).[/vc_column_text][/vc_column]
Over four days of concurrent presentations, poster and film presentations, visiting eye care professionals heard the latest clinical data to support new strategies for treating eye diseases that impact the lives of people of all ages and cultural and socio-economic backgrounds.

New techniques in strabismus surgery; a simplified method for the application of eye drops; unusual complications in cataract surgery; children’s eye protection; and a protocol for growing human orbital fibroplast cultures in vitro. These were just a few of the many and varied topics dealt with by leading Australian and international researchers at the 45th RANZCO Congress.

This was a Congress rich in clinical data, strong on debate and tightly packed with new directions that will shape the future of eye care in Australia, New Zealand and the Asia-Pacific region.

With lectures running from early in the morning through until late at night, there was plenty to stimulate the mind. There were also some memorable social functions – at the top of the list, an opening ceremony and President’s welcome at Tasmania’s impressive, privately owned Museum of Old and New Art (MONA) on the spectacular River Derwent. Here guests were challenged with obscure arts including a ‘poo machine’ and flashing digital media, juxtaposed against Egyptian mummies and ancient coins.

At an early breakfast meeting hosted by Abbott Medical in a chill City Hall, ophthalmologists heard from Professor Paul Mitchell, from Sydney University, Dr. Dan Blake from the Sunshine Eye Clinic in Queensland and Dr. David Chang from the University of California. Dr. Chang started the morning with a video presentation demonstrating his approach to phacoemulsification when dealing with crowded anterior segments.

Professor Mitchell presented studies into the use of fenofibrate as a treatment option for diabetes retinopathy. He said the Accord Study and the Field Study have both indicated that fenofibrate reduced the need for first laser treatment and the progression of the disease. He said fenofibrate (Lipidil) has been around for 35 years and because it is out of patent, “should be fairly cheap”. Although studies have examined the use of fenofibrate for type 2 diabetes, Professor Mitchell said type 2 and type 1 diabetic retinopathy are “pretty much the same” and “the best benefits come from staring early – when the first signs of diabetic retinopathy are there”.

Later that morning, Professor Bhupendra Patel, a Clinical Professor at the University of Utah, delivered the Peter Rogers Lecture. He spoke about “an easy way to find the optic nerve” he discovered as a result of an eye injury his daughter sustained when her brother “bopped her” and said it is a technique that “100 per cent of Australian surgeons don’t use”.

He said having conducted 148 nerve dissections through the orbital area, to treat cases of retinoblastoma and intraocular melanoma, “this procedure can save sight safely”.

David F. Chang, Clinical Professor at the University of California, spoke about the risks of patients with cataract being placed on tamsulosin (Flomax) to control prostate cancer (in men) or treat urinary tract infections (in women). He said studies have shown a strong correlation between the use of tamsulosin and Intraoperative Floppy Iris Syndrome (IFIS), which can cause complications when undertaking cataract surgery. He said peer-to-peer education was essential, with GPs needing to “consider involving the cataract surgeon prior to initiating alpha-blockers”.

In an update on macular degeneration, Professor Brendan Vote spoke about the need to have systems in place to ensure correct diagnosis of wet macular degeneration prior to injections beginning and then to assist in determining treatment intervals. He said repeat explorations to look for changes in vision are important; and there is a need to avoid under-treatment. “More intensively treated patients are gaining vision or at least experiencing a delay in further vision loss. Less regularly treated patients are losing vision,” he said.

Professor Mark Gilles reviewed the AREDS2 Study, and endorsed its findings that beta-carotene appears to have been detrimental. He said the finding that carotenoids reduced the risk of developing AMD by 10 per cent was statistically significant.

Discussions surrounding macular degeneration continued at a dinner on the pier sponsored by Bayer when Julie Heraghty, chief executive officer of the Macular Disease Foundation Australia presented the hard facts from a study into the impact of macular disease on carers. She said depression rates among people aged over 65 who care for someone with wet age related macular degeneration were more than triple those seen in the general population. Two thirds of carers also managed their own serious health issues.

Diners agreed that a heart-warming presentation delivered by comedienne and Ambassador to the Foundation, Jean Kittson painted a very real picture of the impact of macular degeneration. Ms. Kittson spoke about the pressures placed on her parents, both of whom now have macular degeneration, along with other health issues. Ms. Kittson highlighted the reluctance of people of her parent’s generation to ask for help.

For the second consecutive year experts in Indigenous eye health gathered at the RANZCO Congress to discuss progress on, and strategies to, ‘close the gap’ for vision.

Lesley Podesta from The Fred Hollows Foundation said clear indicators have been established to enable progress to ‘close the gap’ on Indigenous eye health to be measured. She highlighted the need to further improve data collection and data linkage tools that will enable comparisons between regional and urban, state and national databases. Later in the session, Professor John Kaldor from the Kirby Institute spoke about how his organisation has created indicators to measure changes in the incidence of trachoma among Indigenous communities.

Mitchell Anjou from the Melbourne Indigenous Eye Health Unit spoke about the four key issues for eye health among Indigenous Australians: cataract, refractive error, diabetic retinopathy and trachoma and the need for strong leadership. “The key is to try to bring stakeholders together to create regional ownership,” he told delegates.

Professor Angus Turner from Lions Eye Institute discussed efforts to broaden screening for diabetic retinopathy among Indigenous communities, while Genevieve Quilty, chief executive officer of the National Optometrists Association Australia (OAA) told delegates of the OAA’s work to underpin outreach optometry services. She said the OAA is currently mapping the workforce to identify gaps in eye care services and aims to develop a sustainable workforce in areas of need. Dr. Ashish Agar from the Outback Eye Service at the NSW Prince of Wales Hospital continued the theme of Ms. Quilty’s discussion, presenting strategies to develop a sustainable ophthalmology workforce in regional and more remote areas of Australia.

Over at the Woolstore, meetings were held for orthoptists, practice managers and ophthalmic nurses. Professor Stephanie Watson talked to orthoptists about the corneal anatomy with reference to new research into the locations of stem cells. She said stem cell deficiency is an “important condition”, which most often occurs as a result of chemical injury but also, and particularly with women, as a result of wearing contact lenses for too long.

Professor Watson also spoke about the controversy surrounding the “newly” discovered Dua’s layer. She said although it may be too early to say we have a new corneal layer, the finding “probably gives some tips” for corneal surgeons. She said more research is needed to help with corneal grafting.

Vu Do, a student with The George Institute in Sydney spoke about research he has conducted into cataract referral procedures. Having surveyed members of Optometrists Association Australia, and receiving a 13 per cent response rate, he was disturbed to find that only eight per cent of suspected cataract patients were tested for contrast sensitivity, despite its correlation with high levels of accidents, slips and falls.

He said his research showed the most common reason for patients wanting to be referred for cataract surgery was reliance on driving, followed by a desire to pursue hobbies. He said 75 per cent of surgeries were performed in private settings and patients in higher socio economic areas were more likely to be referred to private surgeons.

There are few professions that require 17 years of study, combined with practice, to become fully certified and so it’s hardly surprising that the 2013 graduation of Fellows to the Royal Australia New Zealand College of Ophthalmologists (RANZCO) was a prestigious event.

When 31 Doctors presented for graduation as Fellows at the Wrest Point Hotel in Hobart on Sunday 3 November, the ‘who’s who’ of ophthalmology and eye care were there to congratulate them on their achievement.

Along with the awarding of Fellowships, Dr. Ralph Higgins OAM received the College Medal and Dr. Saad Al-Ali received the Distinguished Service Award. The first chief executive officer of the College, Mr. Laurie Pincott MBE, received a standing ovation when he was presented with an honorary Fellowship in recognition of his service and on-going commitment to the College.