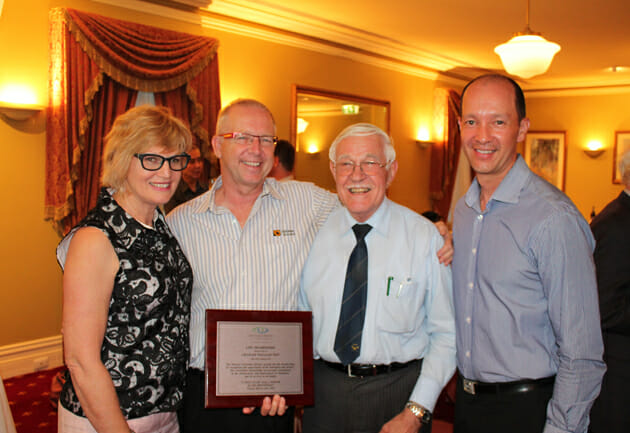 At 77 years of age, practising optometrist Graham William Fist is no stranger to eye health. Neither were his predecessors – Mr. Fist’s family has a history steeped in optometry which dates back 116 years.

Graham Fist’s personal contribution to the profession and community were celebrated on 29 November when he became only the fifth person to be awarded a Life Membership by the Optometrists Association Australia’s West Australia division.

Mr. Fist’s practice is ‘compact’ to say the least and is now located in the foyer of the Mantra Hotel on Murray Street in Perth. From here he refracts, and prescribes, sells and repairs glasses.

As well as being renowned for his gentlemanly manner, Mr. Fist is renowned for his long-term commitment to patients – the oldest patient still on his books first came to Associated Opticians in 1944.

The Fist family’s legacy to the world of optometry began back in 1852 when John W. Fist arrived in Van Diemens Land (Tasmania) as a convict, one of the last to be transported to Australia. John had lived with strabismus all his life and it was the desire to fix the problem that inspired his son William J. to become an optician. Later, William’s son Gordon also trained in eye health and became an optometrist after serving an apprenticeship with his father.

In 1897, William moved from Tasmania to open a practice in Carlton Victoria; then in 1989 he opened in Adelaide. By 1900, they had moved to Perth where they remained.

In 1936, Graham William Fist was born, a son to Gordon. Like his father, Graham became an optometrist and in 1976, he took over his father’s practice.

Congratulated on his contribution

Thirty invited members of the Optometrists Association Australia WA, along with family gathered on 29 November at the Celtic Club in West Perth to celebrate Mr. Fist’s life-long achievements. OAA WA president, Darrell Baker presented Mr. Fist with a plaque and congratulated him for his years of service.

“Graham’s commitment to the profession, his patience and commitment to others has without doubt made him not only a worthy recipient for OAA WA life membership. He is also to be acknowledged as a true gentleman and person of the community,” said Mr. Baker.