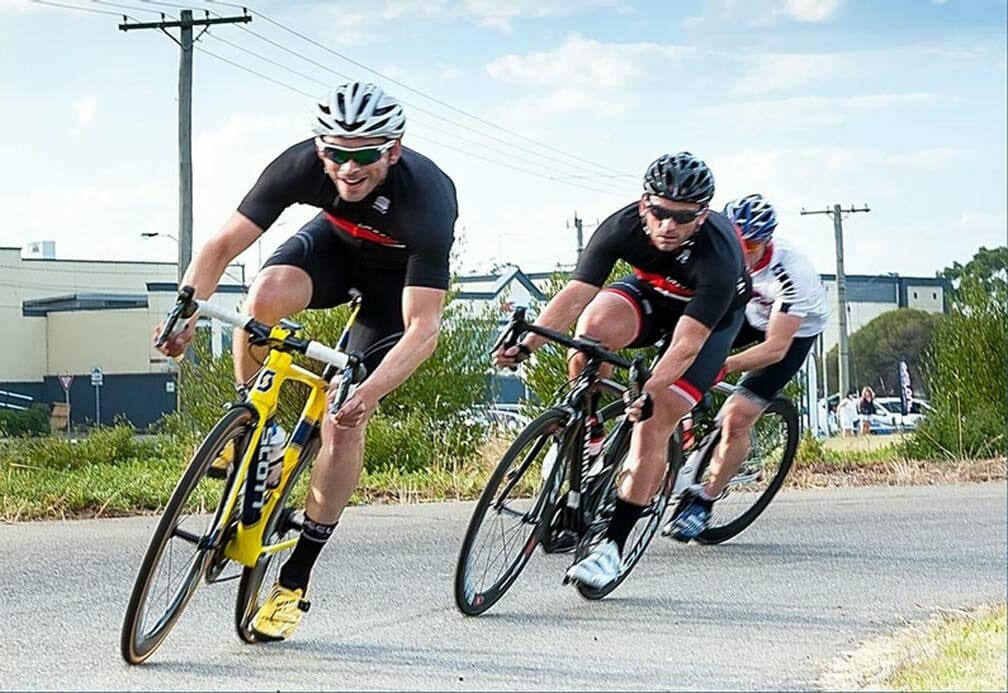 The Hawks had just beaten the Dockers to win last year’s AFL Grand Final and a happy but exhausted Dr. Harry Weisinger was on the train back home. Coincidentally, on the same train was a friend, also an optometrist, and the two got talking. Among discussions of the game, Harry light heartedly mentioned that after a full day of wearing his contact lenses, his vision was blurry. The subsequent conversation led Harry to consider having his vision permanently corrected with laser refractive surgery.

“I was actually joking about how dry my eyes were, and how blurred my vision had become by the end of the match.” said Professor Harry Weisinger (pictured far left), Deakin University’s Foundation Director of Optometry.

“Darren (optometrist friend, Darren Couch) had worked in London with refractive specialists that were having great success, and he had had laser surgery himself with satisfying results. He had no hesitation in recommending laser refractive surgery to me, but I have to admit it was when he told me about the ‘new technology’ that my interest was really piqued. I’m a sucker for innovation!”

The new laser refractive surgery procedure Darren was referring to is called SMILE – Small Incision Lenticule Extraction. It has been available in Australia for just three years and has been used to correct
the vision of over 150 patients here.

The removal of the lenticule changes the form of the cornea, correcting the refraction and improving vision…

Essentially, a VisuMax femtosecond laser is used to create a refractive lenticule in the intact cornea, which is then removed through a keyhole portal, which is also cut by the laser. This leaves the cornea stronger as the incision is much shorter than it would be following standard Lasik surgery. Because no flap is lifted, disruption to the cornea is minimal and corneal strength is maintained.

The removal of the lenticule changes the form of the cornea, correcting the refraction and improving vision.

Until Professor Weisinger had his vision corrected with SMILE technology late last year, like others that develop myopia in their late teens, he couldn’t see clearly further than 20cm away without wearing glasses or contact lenses.

A keen cyclist and basketballer, he said that until that night, he’d had no real interest in laser correction. “After my discussion after the Grand Final, the idea of a permanent solution began to appeal to me. I understood surgical outcomes for standard Lasik were very good and I took comfort in the idea that enough people had had it done for the surgeons to be expert in the procedure. And the thought of the innovation and flapless technology appealed to my personality.”

Professor Weisinger’s initial plan was to travel to the London clinic for the procedure until he was made aware of Dr. Iain Dunlop from Canberra Eye Laser – one of two ophthalmologists in Australia experienced with the technique.

No Fear of the Known

For those who have worked, studied and lectured in vision, the thought of someone surgically and permanently changing your vision, using a relatively new technique, might fill them with trepidation. However for Professor Weisinger, this wasn’t the case.

“Iain had done enough surgeries using SMILE to be technically skilled and also, I knew the laser profile was essentially ‘out of the box’. You don’t need customised ablation profiles for SMILE as you do in Lasik,” he said.

“I felt comfortable turning up for the procedure – I really had no apprehension. In fact, I suspect my attitude may have been a little disconcerting for Iain and his colleagues – I’m sure they were expecting to get grilled with a thousand questions by a Professor of Optometry. But, I trusted them, and I was ready to not have to wear glasses!

Prof. Weisinger said the experience was “simple and quick – the total operation time seemed to take under five minutes for both eyes.”

Afterwards he took a taxi back to his hotel before heading out for a meal and an evening of shopping – and less than 48 hours later he was riding his bike.

“Straight after the operation, I wore sunglasses and had lots of drops in – I wouldn’t say my eyes were comfortable or that I could see clearly, but I was walking around and seeing enough to get around the shopping centre.”

Prof. Weisinger said the corrected vision in his right eye was excellent less than 24 hours later, but his left eye required some revision a month later with another “two minute procedure”.

Three months on, Professor Weisinger says his vision is “better than 6/6” and the fact that he no longer has to wear glasses is incredibly liberating.

“For the first month, I found myself reaching to take my glasses off every time I went to bed – now, of course, I’m used to it and it’s great to be able read, cycle or play basketball without glasses – and to be able to wear any sunglasses I like. I’m really happy.”

Professor Weisinger says while laser refractive surgery is not for everyone, it’s an option for patients that should always be considered and sometimes offered. “SMILE laser surgery is a game changer, and it’s optometrists that really must give their patients the information that empowers them to make the best decision for themselves and their situation. If I had my time again, I think I would have done this earlier,” he said, adding that, for him, the small compromises in vision he has had to make outweigh the benefits.

“I still experience dry eyes if I’m in an air conditioned environment for a long time; and when I’m driving on a country road at night in the rain I find my vision isn’t as good as it was when I had spectacles,” he said. “But I don’t ever find myself thinking that my vision just isn’t good enough.”

“Because the procedure is flapless, the cornea is strong immediately after surgery so this is a far safer alternative for someone like Professor Weisinger who cycles regularly and plays basketball – or indeed for anyone at risk of being hit in the eye through their work or sport.”

Dr. Dunlop said currently SMILE can only be used to correct myopia, with or without astigmatism. “We don’t have the software yet to treat long sighted people, but it is being developed by Zeiss in Germany and colleagues of mine have published very reassuring results on using the technology to treat long sightedness.”

He said the distant future is also exciting for this new technology. “If you really think into the future, you could cryofreeze the lenticules you take out then rehydrate and replace them if you found the patient wasn’t happy with the result – you could have that option of reversibility because the procedure doesn’t involve vaporising the lenticule.”

Additionally, he said, the lenticule could one day be useful as a transplant material if it were treated and shaped in particular ways. “But that’s something no-one has tried yet,” Dr. Dunlop said.