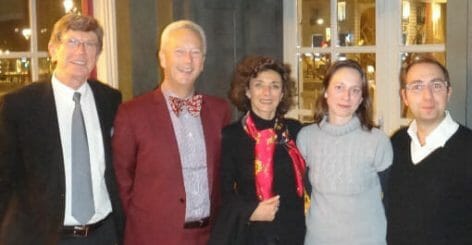 Professor Nathan Efron’spersonal journey of retinopexy, cryopexy, vitrectomy and IOL surgery. A meeting of minds in France turned a planned vitrectomy on its head.

It was unseasonally cold in Bordeaux, where I arrived to visit my dear friend and international colleague of many years standing, the renowned French ophthalmologist and contact lens specialist, Dr. Florence Malet. I actually had the opportunity to visit Bordeaux because I was invited to Paris by Alcon to present a guest lecture at the European launch of their new water gradient daily disposable contact lens – Dailies Total1. Well, as they say in the classics, ‘someone has to do the dirty work’!

I arrived in Bordeaux late afternoon and caught a cab from the undercover taxi rank. When the cab dropped me off opposite my hotel, I was in for a rude shock. Although I had lived in Manchester, United Kingdom, for 16 years and was well aware of how cold it can get during a European winter, I was ill-prepared for the prevailing conditions – about 5 cm of snow! It was bitterly cold, and my footwear was inadequate to keep out the cold. My feet were freezing! But there was to be another angle to my getting cold feet here in Bordeaux, which related more to my eyes than my feet…

The simple message was that in Europe, vitrectomies are a last-resort, drastic and highly risky procedure, rarely performed to solve problems of floaters

Florence had arranged to pick me up and take me to her house for dinner, where we would join her ophthalmologist husband, Professor Joseph Colin. Now my mother always taught me never to turn up as a guest to someone’s house empty-handed, so I had to spring into action to sort out a gift. Fortunately, there was a wine merchant immediately next to my hotel that was still open. I managed to find a nice bottle of Australian Chardonnay, which came in a lovely wooden presentation box. So I purchased this, but the irony of buying a French-derived wine with an Australian label in the heart of the wine region of France did not escape me.

Florence duly presented to my hotel at the arranged time and drove me through the surprisingly quiet streets of Bordeaux to her beautiful four-storey town house, which bordered a large area of parkland. Joseph, who I certainly knew by reputation but had never met, greeted me warmly and gratefully accepted my gift of Australian wine, which he immediately opened… and the wine kept flowing, with more authentic local produce, throughout the evening. I was entertained with a lovely meal, and before I knew it, it was time to head back to the hotel. We had a big day ahead.

But the problem was – Florence’s car was frozen in! So, we had to run a shuttle, from the kitchen to the car, of saucepans full of hot water to free up the wheels and de-ice the windscreen. Joseph, myself and a friendly neighbour, who came outside to witness the commotion (and probably wished he hadn’t) had to get behind the car to push it free. This succeeded, so I quickly jumped in and eventually was returned safely to my hotel.

I was very grateful to have the opportunity to dine with Florence and Joseph in their own house. I have been fortunate in my academic life to have travelled all around the world. I have been wined and dined countless times in restaurants and hotels, but there is always something very special about being invited into someone’s home in a foreign country. To me, that is the ultimate expression of hospitality that surpasses all other pleasurable benefits of international travel. But there was to be another very sad reason why I shall have an especially fond memory of that evening, which I shall come to later.

The following morning, Florence collected me from my hotel and drove me to the Department of Ophthalmology at the University Hospital Pellegrin, where she and Joseph worked. Joseph was chairman of the Department of Ophthalmology, and revered in Europe for his pioneering research in refractive surgery and professional leadership. Following a tour of the department, Joseph, Florence and I ended up in the cafe for refreshments. In casual conversation, I mentioned that I was scheduled to have bilateral vitrectomies over the comings months… but I was not at all ready for their response!

Basically, Joseph and Florence were aghast that I would even contemplate having a vitrectomy performed for a non-urgent problem. Joseph started chatting on his mobile phone while Florence and I went to collect our coffees. It soon became clear what Joseph was chatting about – he had urgently summonsed his head of vitreoretinal surgery, and two other vitreoretinal surgeons, to join us for coffee. I was literally surrounded. The simple message was that in Europe, vitrectomies are a last-resort, drastic and highly risky procedure, rarely performed to solve problems of floaters unless vision is very severely compromised.

Now, these doctors were all very kind and polite, and they made it clear that it was difficult to comment on my specific case because they had not examined my eyes. They were speaking from general principles, but the message was abundantly clear: “You are a moderately high myope; you have had previous retinal tears and thus you have a fragile retina. The risks of complications of vitrectomy surgery outweigh the potential benefits. Perhaps you should rethink your decision.”

As you will see in later blogs, these words were quite prophetic… but let me continue with my Bordeaux story.

That afternoon I had the opportunity to sit in and observe various eye operations being performed in four operating theatres. One of the surgeons, Dr. David Touboul, invited me to observe him perform cataract operations. The last time I observed cataract surgery was 25 years ago, when I sat in with Dr. Nag Rao at the LV Prasad Eye Institute in Hyderabad, India. A lot has changed since then. The whole procedure – from initial small limbal incision to final wound closure – took only about 15 minutes. Watching the phaco machine do its work, and the folded up hydrogel IOL unfurl after insertion into the sac, was just amazing.

That evening I was taken to a lovely restaurant, and the accompanying photograph was taken just before settling down to dinner. Back at the hotel, I didn’t sleep that night, tossing and turning, wondering whether I should go ahead with my vitrectomies. Maybe I should just put up with my floaters and be resigned to substandard vision for the rest of my life. I mulled this over further on my long flight back to Queensland, and came to the decision that vitrectomy surgery was a step too far. I guess you could say I got cold feet in Bordeaux.

The day after I returned home, I rang the ophthalmology clinic and cancelled my vitrectomy surgery scheduled for the following week. Prior to travelling to Bordeaux, I had contacted Mark Cushway, editor of mivision, offering to write this blog. But in view of my change of mind, I emailed Mark again to advise him that I wouldn’t be writing the blogs after all because I had decided not to go ahead with surgery. He emailed back saying that he was disappointed. The irony of this is that I thought Mark’s email kind of read as if he was disappointed that I was not going to go ahead with a series of gruelling eye operations… But of course, he was saying that he was disappointed that I would not be writing the blogs.

Fifteen months after visiting Bordeaux, I was at the annual meeting of the Association for Research in Vision and Ophthalmology (ARVO) in Seattle. I was busy reading the poster of a French vision scientist, who was standing next to his work, and we started up a brief conversation. I mentioned my trip to Bordeaux and the colleagues I had met. He informed me that Joseph Colin had died, age 63, from metastatic renal cancer in February, which was exactly 12 months after we had met. I was truly shocked. There were no signs of anything amiss when I met him, and nothing was said of any problems. I suppose my memories of getting cold feet in Bordeaux will be forever tinged with sadness when I reflect on Joseph’s hospitality and his stern personal ophthalmic advice.