Connect with:
HomemicontactTo ‘V’ or Not To ‘V’
micontact
author: mivision

Professor Nathan Efron’spersonal journey of retinopexy, cryopexy, vitrectomy and IOL surgery is at a crossroad. Should he be resigned to putting up with floaters or remain focussed, positive and committed to the ophthalmic surgical journey?

After getting cold feet in Bordeaux, I returned home resigned to the idea of just putting up with my floaters and getting on with my life. After all, I had a lot to be thankful for. My eyes had been lasered in good time so as to avoid a catastrophic retinal tear, and my retinas were now securely attached with a low risk of further tears. I just had to put this whole episode behind me and get on with my life…

But as time went on, I became more and more despondent. I tried to imagine the floaters weren’t there, or to ignore them, but they were still as annoying as ever. The magnificent vista that I used to enjoy so much on my beloved beach walks was constantly being spoiled by the ever-present swirling mass of cloudy vitreous in my eyes. I still found myself sitting up the front of lecture rooms. I still had to employ my eye saccade trick to clear up the text I was reading. I still had to press command-+ on my keyboard to enlarge the material I was reading on my computer screen.

When I saw Bill for a routine follow-up visit a few months after returning from Bordeaux, I mentioned that I still wasn’t happy with my vision. Bill reminded me that surgery was always an option, and then related the tale of a professional golfer who had been in the news; he was considerably behind the pace after the first day of the four-day tournament, but went out fully committed on day two and focussed and progressed up the ladder to eventually win the tournament. The allegorical message was simply this: think carefully about your situation, but once you make the decision to go ahead with your ophthalmic surgical journey, remain focussed, positive and committed to see it through.

…my ophthalmic journey will be analogous to falling dominoes: once you tip the first domino, the rest will keep falling

Although Bill was seeing me in the middle of a busy clinic, he could sense that I was still undecided over what to do. So he generously spent quite some time with me going through the full scenario, outlining the benefits and risks – such as post-surgical bleeding, glaucoma and macular oedema – and explaining technical aspects of the various procedures ahead. Basically, it goes something like this…

This first point is that my ophthalmic journey will be analogous to falling dominoes: once you tip the first domino, the rest will keep falling. Say we start with a vitrectomy in the right eye. Following this procedure, the vitreous chamber essentially becomes filled with aqueous, which has a different composition to the vitreous that would otherwise be there. This sooner or later results in a posterior subcapsular cataract, which inevitably requires phaco cataract extraction and replacement with an intraocular lens.

You might remember that I am a moderately high myope (R: -6.50/-1.25 x 175 L: -5.75/-1.25 x 180). So, for example, if my right eye ended up emmetropic after the vitrectomy and IOL replacement, I would be left with an intolerable 6D anisometropia. Therefore, even if we did not go ahead with a vitrectomy in my left eye, we would still need to perform a phaco cataract extraction and IOL replacement in that eye to balance up the refraction. Of course, a major advantage of embarking on this surgical journey is that, if all goes well, I would end up with a ‘designer refraction’ – either emmetropic in both eyes or perhaps leaving myself with permanent monovision (more on that later).

Another sinister pathological process taking place in the background is that an epiretinal membrane (ERM) – previously known as ‘cellophane maculopathy’ due to its ophthalmoscopic appearance – has been forming on the inner surface of my retina, and it is constantly getting thicker. ERMs are apparently a build-up of inflammatory cells, exudates, fibrin and other inflammatory debris, caused by the remnants of my vitreous tugging away at, and constantly irritating, the retina via a network of connecting strands.

Now here it is handy to have a wife who is an optometrist and knows her way around an optical coherence tomography (OCT) machine. Suzanne has one at her practice, and I have periodically presented for OCT scans, starting, fortunately, prior to my catastrophic initial ‘ink in the sky’ retinal tear event. Figure 1 shows a series of topographical plots, starting far left with a ‘baseline’ plot of the full retinal thickness of the macula region of my right eye prior to my retinal tear in that eye (in microns), followed by (going from left to right) plots of the change in retinal thickness from baseline at 14, 27 and 43 months after the tear. The numbers in the parafoveal retina are a little variable, but overall there is a clear trend of increasing retinal thickness, which is largely attributed to thickening of the ERM. Consider the fovea (the central round circle in each plot): 43 months after my retinal tear, my fovea was 19 per cent thicker.

The relevance of this progressive ERM formation is that it will remain an ongoing problem. It might start contracting, just like scar tissue, pulling the retina inwards and creating ‘macular pucker’, visual distortions and possible further retinal tears or detachments. Bill’s solution: peel it off during the vitrectomy. That sounds risky to me. A lot more on that later, too!

Bill spent some time discussing what happens after the vitreous is removed. Essentially, the vitreous that is removed needs to be replaced, and this can be with either an air bubble or silicone oil. The advantage of using an air bubble is that it naturally resolves away after 10–12 days without the need for any further surgical intervention. The disadvantage is that vision is terrible for most of the 10–12 day resolution period, and you cannot travel to high altitudes or fly in aeroplanes while the bubble is present, as it could expand and damage the eye.

The advantages of using silicone oil are that (a) it is possibly a better tamponade (i.e. physically holding the retina in place more firmly), (b) being a high myope, I might end up with reasonable vision because silicone oil has a relatively high refractive index, and (c) there are no altitude-related problems. The disadvantages of silicone oil are that (a) a second operation is required to remove it, (b) it is not always possible to remove all the silicone, leaving little silicone balls that roll around in your eye and can be distracting, and (c) the oil can clog up the trabecular meshwork and increase the risk of glaucoma.

A Little Help from Shakespeare

You might have noticed that the title of this blog has syntactic assonance with “To be or not to be…” – the famous opening phrase of a soliloquy in the ‘Nunnery Scene’ of William Shakespeare’s play Hamlet, i.e.
“To ‘V’ (have a vitrectomy) or not to ‘V’”. This little phrase had been constantly buzzing around in my head during the 14 months since my Bordeaux trip. After at least three discussions with Bill over that period, and almost every night with Suzanne, I decided it was time to proceed. I simply figured that the benefits were going to outweigh the risks. 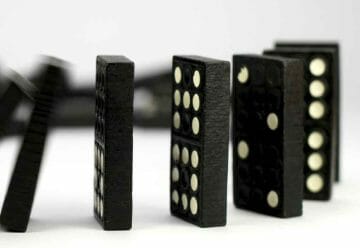 I rang Bill’s clinic and made an appointment for a vitrectomy the following month; Bill had said that he would start with my right eye because it had the more pronounced ERM. The decision created the feeling of a huge weight being lifted off my shoulders. I was going to see it through, just like the golfer in Bill’s story.