Connect with:
HomemifeatureBlink Wins One of the Toughest Yacht Races in the World
mifeature
author: dloxton

Blink Wins One of the Toughest Yacht Races in the World 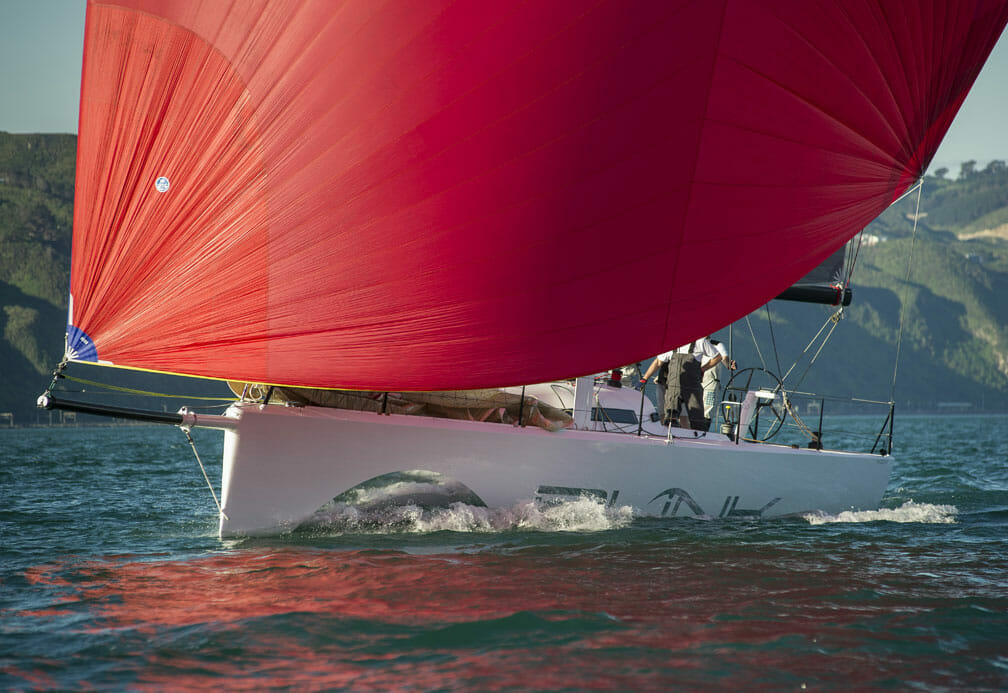 Seven years ago, Vesna Wells booked her husband into a sailing course, fearing he was “too obsessed with ophthalmology” and needed a hobby. This year, Wellington ophthalmologist Tony Wells skippered his 12-metre yacht Blink to victory in one of the world’s most gruelling yacht races around New Zealand’s North Island.

The first question you’ve got to ask of anyone competing in the Round North Island two-handed Race (RNI2h) is: “Why?”

It’s a 1,244-nautical mile (2,304km) course (that’s almost twice as long as the Sydney to Hobart) through seas that range from becalmed to storm-force – from Auckland around the North Island and again. Competitors battle extreme exhaustion, sleep deprivation, hypothermia. They’re almost constantly wet. Stories of hallucinations, injury and near drowning are commonplace.

And, perhaps the craziest thing of all? The yacht – which usually requires a crew of between eight and 11 – has just two people on board, or as the competitors themselves quip “just four arms, four legs, four eyes, two torsos and two opinions”.

“I’m not sure why I do it,” Wellington Ophthalmologist Tony Wells admits. “I think it is the achievement thing; setting a big challenge and knocking it over. There’s also a great sense of camaraderie and competitiveness. By the end of the race, you’re actually sailing with and against friends.

“It’s a complete break from everything. It’s a really good way to de-stress.”

The race provides moments of breathtaking beauty, with seas like glass, watching a pod of dolphins leap about the bow, the sun setting on one side, the moon rising on the other … “all the classic stuff”.

wishing a helicopter would pick me up and sub me out”.

And the moment of victory? Well there’s no actual finish line to cross for overall victory; and while local yachties and support crews certainly show their enthusiasm, the race entrants are simply too tired for sustained celebrations.

With the race broken into four legs, with brief rest, recovery and repair stopovers at Mangonui, Wellington and Napier, the winner is decided on the cumulative times recorded by the boats on each leg. With a time of seven days:11 hours:51 minutes:02 seconds Wells and his race partner (and Blink’s designer) Rob Shaw won the 2014 race, with a margin of just three hours.

“Our main competitor was a similar but smaller boat Bushido, which had a serious professional sailor and skipper on board. Our boat was faster; they sailed better.

“We were actually out to dinner when we got the results. We are both fairly reserved type of people – Rob probably even more so than me.

“There was a few nods and smiles and ‘that was good, let’s do it again’ and that was it really.

“It was pretty cool,” he says, with obvious understatement. 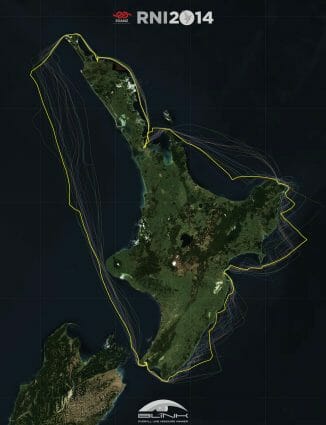 The Round North Island Two Handed Race (RNI2h) is referred to as “one of the toughest yacht races in the world”. Started by Sir Peter Blake in 1982, it is held every three years.

The race starts and finishes in Auckland and has a rhumb-line, or direct route, total distance of 1,244 nautical miles or 2,304 km. The Sydney to Hobart by comparison is 628 nautical miles.

Tony points out that competing boats actually sail much further than the rhumb line; strategic considerations and an inability to sail directly upwind typically add another 30 per cent to the length of an offshore race course.

The RNI2h is divided into four legs by three 24 to 48 hour stopovers and includes the rounding of 11 major capes including New Zealand’s three big ones: East Cape, Cape Palliser in Cook Strait, and North Cape.

Wells says he first entered the race in 2011 – generally regarded as the toughest RNI2h ever. Only half the fleet made it past halfway with broken boats, keels, masts – and people – forcing the withdrawal of boats at or before Wellington. Tony’s yacht was forced to retire when he broke his coccyx. It was in that 2011 race, Tony recalls, that one competitor, at the edge of his physical limits while nearing Cook Strait in the middle of the night, had a vivid hallucination of steering his boat through a service station forecourt to get a hot pie.

“It is a gruelling event. There are real issues of managing tiredness, hypothermia, hydration and eating – it is really easy to forget to eat.

“Because there’s only two of you, it’s often like solo sailing in turns. If there are manoeuvres you are both out on deck, no matter whose shift it is, but a lot of the time you are out on deck alone.”

As you would expect, the partnership in a two-person crew is crucial.

“It helps to have a tight relationship.”

Tony intended to sail the race with his wife Vesna, but when it became clear that her arm, broken (while sailing) several months earlier had not yet regained full strength, Blink’s designer Rob Shaw, stepped into the breach.

Rob had been sailing for many years, and brought substantial offshore sailing experience to the Blink team.

“I’d known Rob for a couple of years, but we had not sailed much together before,” Wells says. Even so, he had “complete faith” in him. Events proved that faith to be completely justified.

“There was a moment doing a sail change in strong weather,” Wells recalls. “Part way through that manoeuvre, there was a wave that flattened the boat.”

With the boat completely on its side, Wells was held under the water by the sail.

“There wasn’t time to be terrified. I looked up and saw nothing but water and sail and thought ‘I would like some air here’. I couldn’t slide myself forwards or backwards. Rob sorted it out quite quickly and was able to get the boat back up. By the time I worked out I was in trouble, he had the boat coming up again.”

The incident was captured on an automatic time-lapse camera and is posted on the boat’s blog with Blink crew wryly noting the following statistics:

As if the race itself wasn’t enough, Wells points out that as he lives in Wellington, and the boat is usually moored there, once the race was completed, he had to sail the boat home.

“We effectively sailed two laps of the island, by the time we sailed there, did the race and sailed home again,” he laughs.

Ask him if he’ll be taking part when the next RNI2h is scheduled in 2017 and there is not a moment’s hesitation.

“Oh, yes! Many people who do it come back for more punishment. It is a fantastic challenge.”