Connect with:
HomemifeatureGiving Back Part of Some People’s DNA
mifeature
author: Mark Cushway and Melanie Kell

Giving Back Part of Some People’s DNA 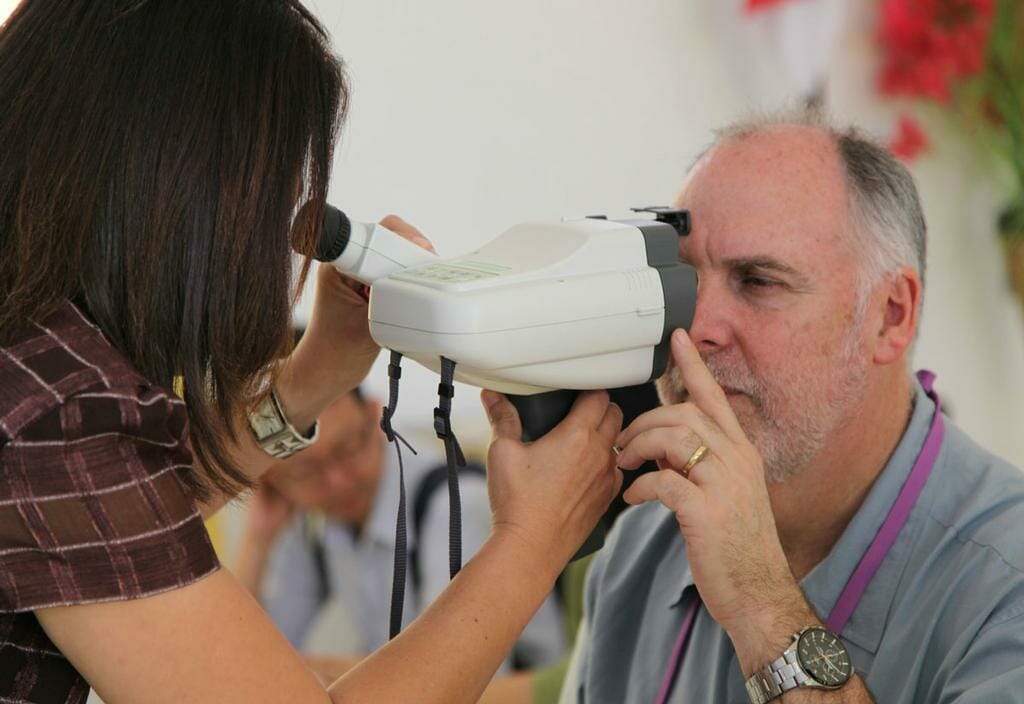 Venture capitalist Mark Carnegie recently proposed that community service be made mandatory for all Australians. While many retorted that they have too little time as all their energy is spent working to pay the mortgage, there are others who believe giving back is a way of life; just part of their DNA. Seven of these people who work in eye health were recognised in the 2014 Queen’s Birthday Honours list for their services to the community

When optometrist Susan Walton received a letter in the mail advising that she was to receive the Order of Australia medal, she was caught by surprise and “blown away at the thought of receiving such a prestigious medal”. She said she’d fallen into the community service she has been recognised for, without fully realising what she was embarking on or how it would impact her life.

“I went to America as a volunteer for the Special Olympics World Games in 1995. At the time I was the chairman of Sports Vision Australia. Although I had received some information about the Special Olympics, I went along without fully understanding what it was all about. Once I’d done my first training session I was hooked – it’s amazing to be able to use our skills for events like this,” she said.

Dr. Walton, along with optometrists from around America and the world, were trained to implement the Opening Eyes program at the World Games in 1995 and encouraged to establish the program in their own countries or states thereafter.

The program facilitates free standard eye tests and, where required, the provision of corrective glasses for disabled athletes who compete at the Special Olympics. In the wake of Opening Eyes, other health care practitioners have offered their services in audiometry, podiatry and dentistry, however the Opening Eyes program remains the only service to deliver a finished product, with many athletes returning home after the games with free prescription spectacles, or receiving their glasses in the mail soon after.

Dr. Walton ran the Opening Eyes Program for the first time in Australia in Sydney in 2002 at the National Special Olympics Games. “There were 800 competitors and we tested 398 of them. A total of 141 spectacles, and 23 prescription swimming or sports goggles were made up and distributed,” she said.

Since then she, and other volunteers have implemented the service at the National and State games; as well as the Junior National Games. In November last year the Special Olympics Asia-Pacific Games were held in Newcastle involving over 2,500 athletes from 28 countries. The Special Olympics Lions Club International Opening Eyes Program provided 768 eye exams and as a result, had 140 spectacles made up for competitors. Fifty of those spectacles were delivered to the athletes at the closing ceremony. The remaining glasses were posted off to athletes in the Asia Pacific. Free prescription sports and swimming goggles were also provided.

Dr. Walton said there are varied reasons for why health checks and services need to exist. “Sometimes an athlete’s glasses may be old and fragile. Sometimes an athlete needs spectacles but because of their intellectual disability, they haven’t been able to articulate the need. On the ground at the Games we can observe problems and work to correct them. The glasses we have made up can make all the difference to their performance.” Dr. Walton said eye diseases such as glaucoma have also been picked up at the Games, and as a result, the athlete returned home with a referral to a specialist.

Dr. Walton said the Order of Australia medal was an enormous honour and one that reflected the work of her entire team as well as her family, Evan and Hannah, who all help to make the Opening Eyes Program happen. “At the Asia Pacific Games for instance, we had 25 optometrists, 20 students, six optical dispensers and volunteers from the Lions Club International.”

Optometrist Peter Lewis from Mount Waverley in Victoria received an OAM for “service to optometry, particularly eye care in Indonesia and Timor-Leste”. His colleague, Peter Stewart from Kew in Victoria, was also recognised with an OAM for “service to the international community through the provision of eye health programs”. Mr. Lewis and Mr. Stewart co-founded the Sumba Eye Program and continue to work as volunteers for this program and for the East Timor Eye Program. Mr. Stewart is also a member of Optometry Giving Sight and Vice-President of Kew Rotary Club 201.

Mr. Lewis, who established Lewis and McConnell Optometrist in 2002, said he was honoured to receive the Medal, “for myself, my family, my Dad who was a Life OAA (formerly AOA) Member, for the people of Timor-Leste and Sumba and for optometrists Australia wide… There are many Australian optometrists who do a massive amount of volunteer work here and in the developing world and I share this honour with them”.

He said he was particularly proud of the acknowledgement he, fellow optometrist and OAM awardee Peter Stewart, ophthalmologist Dr. Mark Ellis AM and Sumba Eye Program members received for their work in Sumba and Timor-Leste. “These programs have facilitated wonderful collaborations between optometry and ophthalmology in both Australia and overseas. Many lifelong friendships have been made,” said Mr. Lewis.

“I am very happy that optometry and the benefits of vision and eye care are being recognised by Governments and NGOs around the world. We believe – and know – the work we do can help elevate people in developing countries from their cycle of poverty, particularly school children.”

He explained that the Sumba Eye Program in West Timor evolved through a chance meeting with NGO Sumba Foundation Director Dr. Claus Bogh who requested help in delivering much needed eye care (refraction, education and surgery) to his isolated part of Indonesia. The cause attracted significant financial support from Optometry Giving Sight, Rotary Glenferrie and Rotary Kew, as well as logistical support from the Royal Australasian College of Surgeons. “This enabled us to provide primary and tertiary eye care, significant hands on, formal, didactic and remote training, equipment, motor bikes and spectacle care and supply lines to the people of Sumba,” said Mr. Lewis.

“We are now entering a new phase with teaching involvement from the Ophthalmology Department of the University of Hasannudin in Sulawesi, Indonesia. We are hopeful that this collaboration will lead to a significant expansion and consolidation of a truly sustainable self-supporting program, not only in Sumba but in all of West Timor,” he said.

Maryanne Diamond from Strathmore, Victoria was recognised with the Officer of the Order (AO) medal in the General Division of the Order of Australia. Ms. Diamond was recognised for her “distinguished service to people who are blind or have low vision through national and international leadership roles, and
as an advocate for best-practice employment opportunities”.

Ms. Diamond, who has been blind since birth, has a long history of disability advocacy work for people who are blind or have low vision through national and international leadership roles, and as an advocate for best practice employment opportunities. She is currently General Manager of Advocacy and Engagement at Vision Australia the nation’s leading provider of blindness and low vision services and Chair-Elect of the International Disability Alliance as well as the Immediate Past President of the World Blind Union (WBU).

Born into a family of five children in Queensland, Ms. Diamond attended a residential school for the blind from a very young age, where she learnt braille and developed a passion for reading. She attended a mainstream school for her final four years of schooling, where she said she became aware of the challenges faced by people who are blind or have low vision in getting access to print information such as textbooks, notes and assignments.

In her time as president of the WBU, Ms. Diamond was instrumental in the development of the Marrakesh Treaty, a treaty developed to loosen international copyright laws on books published in accessible formats. Currently just five per cent of the world’s print information is available in an accessible format. Once ratified, the Marrakesh Treaty will allow organisations to share books directly with individuals who are blind or have other print disabilities and enable the international exchange of books between relevant organisations without contravening copyright laws, thus significantly expanding the choice of books available for people with print disabilities to read.

Married and with four children of her own, one of whom has low vision, Ms. Diamond has said of her achievements, “I think that one of my major contributions to persons who are blind or have disabilities is my role as a parent – whether it was walking to and from school with my children, being present for various activities in the class room or school events, being part of my children’s sporting and other activities, and so on. In these roles, I was there as a parent, not as a blind person. Using braille to access information at meetings and using my white cane getting to and from meetings, and participating as other parents did in those meetings, was a great way to influence their attitudes and beliefs about persons with disabilities”.1

Ophthalmologist Dr. Francis Poh Gwan Cheok from Riverview, NSW, received an OAM “for service to medicine, particularly ophthalmology, to professional organisations and to the community”. Among other achievements, Dr. Cheok is highly regarded for his pioneering work in phacoemulsification cataract surgery and has made annual visits over many years as a volunteer ophthalmology surgeon to the Jesuit Mission in Hazarabag.

Optometrist Jane Frances Duffy from Fitzroy in Victoria was awarded an OAM for “service to community health, particularly through optometry services”. Among a long list of achievements, Ms. Duffy is a Victorian Practitioner Member of the Optometry Board of Australia and the Australian Health Workforce Ministerial Council, since 2009. She has been Chair of the Scheduled Medicines Advisory Committee since 2010; and is a current Member, of the Policy and Guidelines Committee. Ms. Duffy was President of the Optometrists Registration Board of Victoria in 1996; and a Ministerial Appointee from 1993–96. She was a Sessional Member (Optometrist) with the Victorian Civil and Administrative Tribunal, 2006–2012 and the Foundation Executive Officer of the Optometry Council of Australia and New Zealand from 1996–2009. Ms. Duffy assisted in establishing the Indian Optometry Federation and the Optometry Council of India, at the invitation of the Brien Holden Vision Institute and the Australia India Council, from the late 2000s until 2012.

From Camberwell in Victoria, Gertrude Marguerite Westh was recognised “for service to the blind and people with low vision”. Ms. Westh was the State President, Council of Auxiliaries, Royal Victorian Institute of the Blind (now known as Vision Australia), from 1986–2004; and State Vice-President from 1972–1985. She has been a member of the organisation which is now Vision Australia since the 1930s and was involved in establishing the Lighthouse Auxiliary. In 1990, Ms. Westh was awarded the Blind Workers Union Medal. She has also been recognised with a 50 Years’ Service Award from the Royal Victorian Institute of the Blind.

mivision joins the eye care community in thanking each of these outstanding citizens for their contribution to global eye health and congratulating them on their achievements to date.