Melanoma of the Eye Caused by Two Gene Mutations 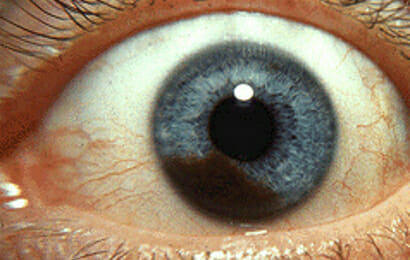 Researchers have identified two genes which, when mutated, cause the most common form of eye cancer in adults.

Additionally, in experiments with mice, they have been able to slow eye tumour growth using verteporfin, according to findings published in the journal Cancer Cell.

“The genetics of this cancer are very simple and our results have clear implications for therapeutic treatments for the disease,” said Dr. Kun-Liang Guan, Professor of Pharmacology at the University of California San Diego Moores Cancer Center and co-author of the study.

The researchers looked specifically at uveal melanoma. Uveal collectively refers to parts of the eye, notably the iris, that contain pigment cells. As with melanoma skin cancer, uveal melanoma is a malignancy of these melanin-producing cells.

Uveal melanoma is the most common primary intraocular malignant tumour in adults. If the cancer is restricted to just the eye, the standard treatment is radiation and surgical removal of the eye. But uveal melanoma often spreads to the liver, and determining the metastatic status of the disease can be difficult. In cases of uveal melanoma metastasis, patients typically succumb within two to eight months after diagnosis.

Scientists have long suspected a genetic association with uveal melanoma because one of two gene mutations is present in approximately 70 per cent of all tumours. Until this study, however, they had not identified a mechanism that could explain why and how these mutations actually caused tumours.

The work by Guan and colleagues unravels the causal relationship between the genetic mutations and tumour formation, and identifies a molecular pathway along which drugs might counterattack.

The two genes implicated – GNAQ and GNA11 – code for proteins (known as G proteins) that normally function as molecular on-off switches, regulating the passage of information from the outside to the inside of a cell.

In their experiments, the scientists showed that mutations in these genes shift the G proteins to a permanent “on” or active status, which results in over-activation the Yes-associated protein (YAP). The activation of the YAP protein induces uncontrolled cell growth and inhibits cell death, causing malignancies.

“We have a cancer that is caused by a very simple genetic mechanism,” Guan said. “And we have a drug that works on this mechanism. The clinical applications are very direct.”

Myopia Control in Children through Refractive Therapy Gas Permeable Contact Lenses: Is it for Real?

Eye Health of Disadvantaged Youth to Benefit from Grant