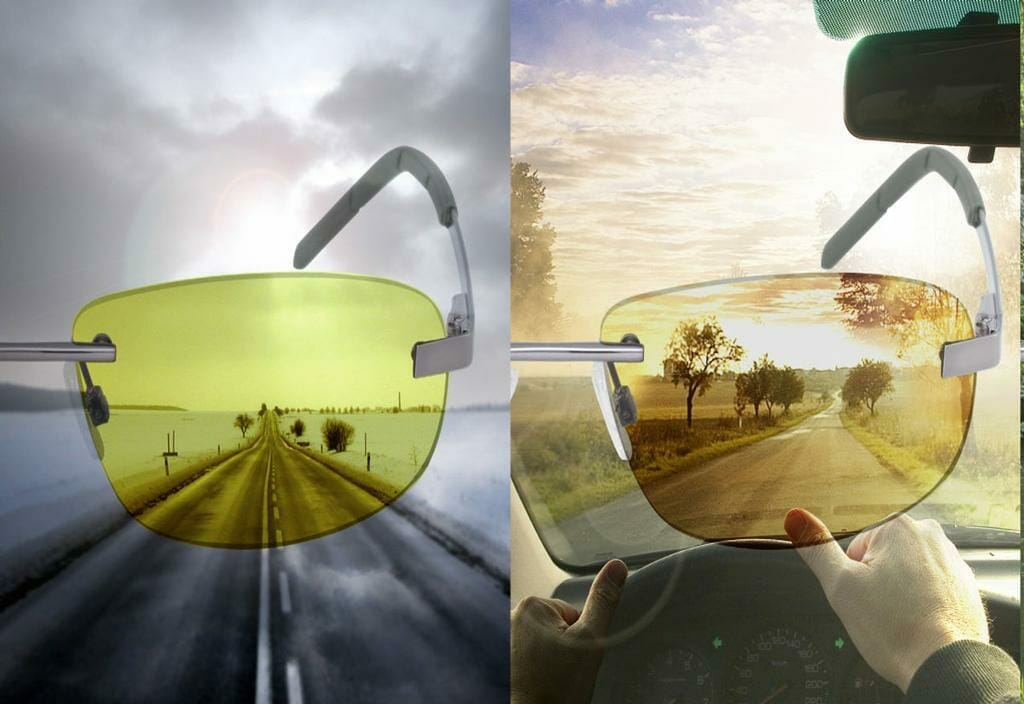 Contrast sensitivity refers to our ability to distinguish between an object and the viewing background. Think of a black dog on a snowy background versus a grey dog on a snowy background; the black dog is high contrast and the grey dog is low contrast. Contrast is significantly diminished by the presence of glare, and with blinding glare from wet surfaces plentiful during winter months; reduced contrast is an issue for all patients during this time of year.

Glare can result from either direct or reflected light. There are three classifications of glare that can effect acuity or visual comfort. The light levels are measured in lumens, with the ideal for vision measuring between 1,000 and 1,400 lumens.

Discomforting glare can occur on cloudy days or any conditions that range from 3,000 to 10,000 lumens where the eye has difficulty adapting. It causes people to squint and feel the need to shade their eyes.

Disabling glare typically happens on a clear sunny winter’s day with 10,000 lumens or more. It results in reduced vision and reduced contrast, and is sometimes referred to as ‘veiling glare’ because it is like looking through a veil.

Blinding glare is a result of reflected light from flat shiny surfaces, such as water, snow and wet roads. It is the most dangerous type of glare because it can severely obstruct vision. Colour, contrast sensitivity and depth perception can be dramatically compromised and vision is often completely obscured.

Tinted lenses can relieve some brightness that is present on sunny and overcast days.

Lenses with a light transmission of 12 to 15 per cent (or a tint of 85 per cent to 88 per cent) will reduce the lumens exhibited on a typical sunny day to between 1,000 and 1,400. This can be likened to the effect of a shade cloth that blocks approximately 85 per cent of the light on your patio. However, on overcast days, an 85 per cent tint density could be too dark for comfortable vision. Instead, whatever tint is chosen, a lighter density tint or colour may be more appropriate for overcast conditions.

A few of the most popular tint colours are as follows:

Depending on the tint density, a grey lens can be good in bright conditions, particularly if the lens has an 85 per cent tint. However, an 85 per cent grey may not be the best tint to deliver high contrast vision in lower light conditions such as dawn, dusk and on overcast days.

Brown lenses allow more yellow and some red wavelengths through, but block more blue wavelengths. This means colour perception may be slightly altered, but contrast and depth perception are vastly improved.

Brown lenses perform very well in bright conditions of summer. They are also ideal for overcast days, low light conditions, and hazy or foggy conditions, making them good for winter. Additionally, they can be more comfortably worn into the dusk and dawn hours than grey.

Copper is useful for rendering orange, brown and reddish colours stronger and is popular for sports that require sharp vision such as skiing, motor racing and shooting. Depending on tint density, copper tints can be ideal for driving in winter.

Polarised lenses are the only lenses that reduce winter’s blinding glare when light is reflected off wet roads, wet surfaces, snow and water.

They absorb and eliminate horizontal reflected glare, while allowing remaining light to pass through, improving acuity and contrast. Additionally, they reduce the amount of brightness entering the eye, thus reducing discomforting and disabling glare produced on cloudy or bright days.

A double blind wearer test conducted at the Complutense University in Madrid in 2013 examined wearer preference between single vision tinted lenses and single vision polarised lenses. The tinting process was carefully tuned to match the transmission and colour spectra of the two lenses; so the only variable was that one pair was polarised and the other unpolarised. Overall the polarised lens was preferred over tinted lenses by two out of three wearers and by three out of four for driving.

An ideal sun lens solution – particularly for driving during the wet months – is polarising adaptive lenses. Polarised at all times, adaptive polarised lenses incorporate photochromic dyes designed to shift between a lighter and darker density as visual circumstances change by reacting to varying lighting conditions.

Adaptive polarised lenses such as Drivewear – which use Transitions photochromic technology – not only darken in response to ultra-violet light, but also darken in response to visible light. This means Drivewear has the ability to change colour and density behind the windscreen. Inside the car the lens will be copper – ideal for enhancing contrast and acuity while driving. Outdoors, in bright direct sunlight, the polarised lenses will become a dark reddish-brown.

Although designed primarily for improving vision while driving, the Drivewear lens is also ideal in other outdoor situations.

Trevor Inglis has been in the optical industry for 35 years in various technical, training and management roles. Currently he is Sales and Marketing Manager for ANZ at Younger Optics.