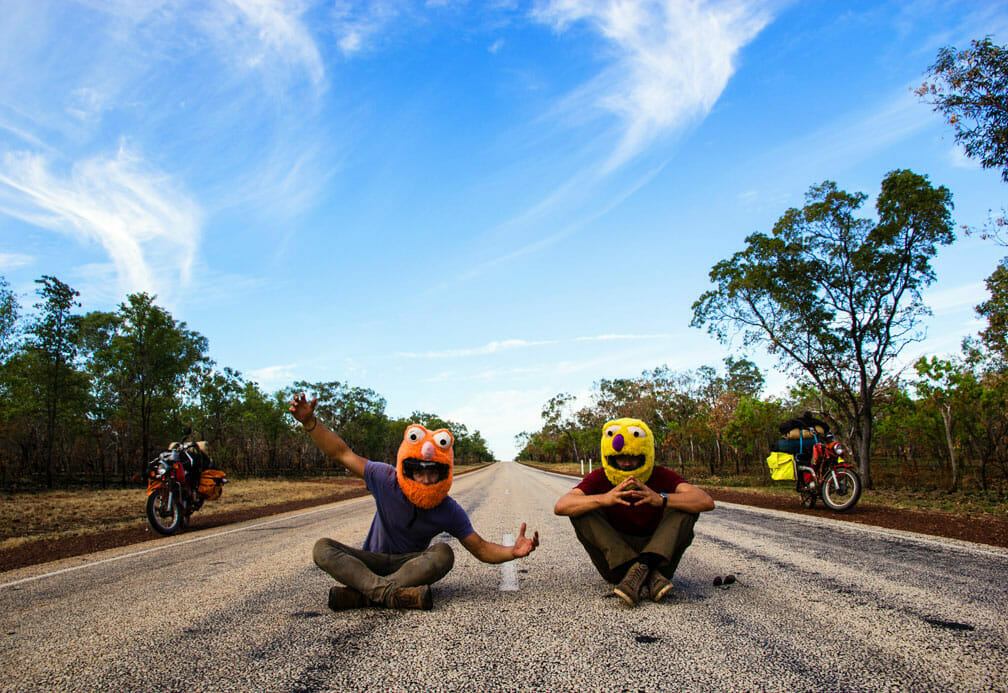 Late this month, for the third consecutive year, blind marathon swimmer James Pittar will swim off Sydney’s Northern Beaches from Collaroy to North Steyne Beach. Back in May, two young men jumped on retired 7Hp Australia Post bikes and rode 4,000km overland from Perth to Darwin. And at the other end of the spectrum, last March, over 2,500 walkers completed the fifth annual Sydney Coastrek organised by Wild Women on Top.All those individuals, all that adventure, and all with one purpose in mind: to raise money for charity.

For Perth boys Ben Hollings and Adam Quigley, holidays are about having fun while making a positive difference to the world around them.

“Last year we travelled across India in a Tuk Tuk,” said Ben, who works as an engineer. “It was really a ridiculous form of transport to cover 4,000km on but a lot of fun and we raised money for Frank Water, which helps set up sustainable drinking water solutions for villages in India. When we go on these trips we like to raise money for a charity related to the area we’re travelling through.”

Having completed the trip the two friends put their heads together to nut out the next challenge and decided on riding from Perth to Darwin, taking in part of the rough surfaced Gibb River Road.

With both men having family members who work in optical dispensing, the decision to raise funds for The Fred Hollows Foundation was a no-brainer… and so The Outback CT110 Adventure came to life.

“We chose to ride the trip on 7Hp Postie bikes because they have basic mechanics so they’re easy to fix. Australia Post auctions them off once they’ve done 25,000km so there are a few around although I had to get a lift 300km out to Meriden to pick up mine,” said Ben.

Ben said the entire trip was relatively trouble free, save for a buckled wheel and a near crocodile encounter.

“We travelled from Coral Bay to Karijini National Park, north to Port Hedland then up the coast to Broome and on to Derby,” said Ben. “We were planning to do the whole Gibb River Road (a former cattle route that stretches almost 660km through the Kimberley between the Western Australian town of Derby, Kununurra and Wyndham Junction on the Great Northern Highway) but we were getting tight on time. Instead we did the first section, then cut down past Windjana Gorge and Halls Creek, did the Fitzroy Crossing then travelled up Highway One, to Darwin.” He said nights were spent sleeping in swags, and mostly in campgrounds or caravan parks.

“It was the first time I’d travelled there by road and I thought the scenery was amazing – miles of national parks, brilliant blue skies and dense red rocks. It was so green because we were on the road just after the wet season. We were in amongst scenery most Australians never get to see.”

One late afternoon when riding through the Windjana Gorge, down past Tunnel Creek and heading toward Fitzroy Crossing, Ben and Adam had a near miss. “We got to a river crossing in the dark and without thinking about it I jumped off my bike and waded out into the creek to check the depth. I’d reached the middle when Adam called out, ‘Do you think there’ll be any crocodiles in there?’. I’ve never moved so quickly – and quietly – before,” he laughed.

With no support vehicle, you could be forgiven for thinking Ben and Adam were a little too gung-ho for their own good and lucky to live to tell the story, but they said it was all part of the fun. “We had enough spares to fix most things that went wrong – and nothing did go seriously wrong,” Ben said. “We had to change one tube due to a damaged inlet and just outside of Carnarvon I had a small accident and bent my front forks. Being a Postie bike, the repair was relatively easy. I bent the mudguard back into shape then put the wheel between my knees, grabbed the handlebar and straightened the whole thing up – just as you would a bicycle.”

Of course Postie bikes aren’t known for their speed and so in an attempt to ward off any road rage from frustrated drivers, Ben and Adam chose to wear fluffy orange and yellow bike helmet covers. “They made people laugh which was good and also helped start conversations about our fundraising effort and the work of The Fred Hollows Foundation,” said Ben, adding that as a result, they picked up donations for The Foundation along the way.

Sydney-sider James Pittar prefers to pursue his fund raising adventures on the ocean.

Diagnosed with retinitis pigmentosa at the age of 16, legally blind by the time he was 21 and completely blind by the age of 30, James is committed to raising funds for The Fred Hollows Foundation and for the Rainbow Club, which enables children with disabilities to learn to swim. A keen sportsman when growing up, it was James’ father who taught him to swim, with Sundays spent at Freshwater beach.

While his favoured sports of cricket and rugby weren’t possible to pursue once he’d lost his sight, James has been able to swim long distances with assistance from friends who paddle alongside him in a kayak, providing directions. “We have three commands… One long blast means veer left, two short ones mean to veer right and three long blasts is for a shark… and I haven’t had three yet,” he said during an interview with James O’Loghlin on ABC Radio. “I’ve never worried about sharks because I can’t see them.”

He said getting through the shore breakers, swimming through blue bottles or in high winds when it’s hard to hear directions can be harrowing. “You’ve got to have all your faith in the person swimming or kayaking next to you because they’re the ones giving you directions… I can’t do a swim without my team. They’ve got to do more work than I do.”

James has been swimming marathons to raise funds for The Fred Hollows Foundation since 2006 and in 2009 was inducted in the International Marathon Swimming Hall of Fame as an Honour Swimmer. He has successfully completed the Triple Crown of Open Water Swimming, which comprises three marathons; across the English Channel between England and France; across the Catalina Channel between Santa Catalina Island and the Southern California mainland in the United States, and the Manhatten Island Marathon Swim, a 45km circumnavigation of Manhattan Island.

James has attempted five, and completed four of the ‘Seven Oceans’ swims. Impressively, the oceans he has swum are the Cook Strait between the North and South Islands of New Zealand; the English Channel; the Catalina Channel; and the Strait of Gibraltar between Spain and Morocco. James attempted but was unable to complete the Molokai Channel between the western coast of Molokai Island and the East Coast of Oahu in Hawaii due to injury.

Speaking of his commitment to fundraising for The Fred Hollows Foundation, James said, “The work The Foundation does is incredible… There are so many people in Australia and in developing countries who are blind because they have cataracts or trachoma, but they are simply too poor to afford an operation.

“It’s often the case that the daughter or granddaughter of the person who is blind will stay home from school to be the carer. Those girls miss out on their education, which means their future is challenged as well. With one quick operation, we can release a person’s disability and send the young girl back to school.

“For as little as $25, The Foundation can restore sight to a person living with avoidable blindness.”

When James completes the Swim for Sight event off the Manly Coast on 28 September he hopes to be one of a team of 40 swimmers who each will raise AU$1,000 to go towards a comprehensive and sustainable eye program in Laos.

For those who prefer big team events, there’s Sydney Coastrek – billed as “an endurance challenge to promote health and fitness, encourage team work, build mental and emotional toughness and have fun”. Conceived in 2009, for many Sydneysiders this event has fast become a fixture on the annual calendar.

This year, Sydney Coastrek offers the option of participating in either a 55km trek from Palm Beach to Balmoral, or a 55km walk from Coogee to Balmoral.

For Sophia Santamaria (formerly Sandy Pandelis) and three of her friends, Coastrek was a life changing experience. “I worked with Fred Hollows as his personal secretary from 1973–1976.

Last year in Bourke, at the 20th anniversary of his death Gabi (Hollows) suggested I should get a team and enter Coastrek to raise money for The Foundation. My initial thought was that I wouldn’t be able to do it, however with encouragement, I signed up and then

I signed up my sister, and two friends – they all took some convincing as well, but ‘Fred’s Angels’ became a reality.

“In the beginning we trained monthly then weekly on the actual route. We also attended some of the training conducted by Wild Women on Top, but we still didn’t know whether we were mentally tough enough to walk 50km in a day. On the day our aim was just to finish – and we did, we walked from Palm Beach to Balmoral in 13 hours and 20 minutes.

At the 42km mark we were struggling but after a long stop and encouragement by our support crew and family we continued and almost ran the last kilometre – you get such a high.”

Sophia said fund raising for The Foundation was very easy.

“We had a morning tea with the ladies from golf, fund raised at book clubs

and generally kept asking people; continually updating our training progress, complete with photos where none of us looked glamorous.

In total Fred’s Angels raised $20,122 and, for their efforts, won a three day trek along the Larapinta Trail in the Northern Territory.

“We’ve just come back – the walk we did in the Northern Territory was fantastic but it was the hardest thing I’ve ever done,” said Sophia.

“Having completed Coastrek and trekked along the Larapinta Trail we have still got the bug; we walk well together, we have a great time and our husbands have become an amazing support crew and want to become involved in the fundraising as well, so we will definitely be registering to do Coastrek again next year.”

When established by Wild Women on Top in 2010, Sydney Coastrek raised over AU$200,000 for The Fred Hollows Foundation. The event has grown exponentially raising nearly AU$1 million in 2012, over AU$1.8 million in 2013, and this year, founder Di Westaway handed The Foundation a cheque for an incredible AU$2.6 million, which will help restore sight to 100,000 people who are needlessly blind.