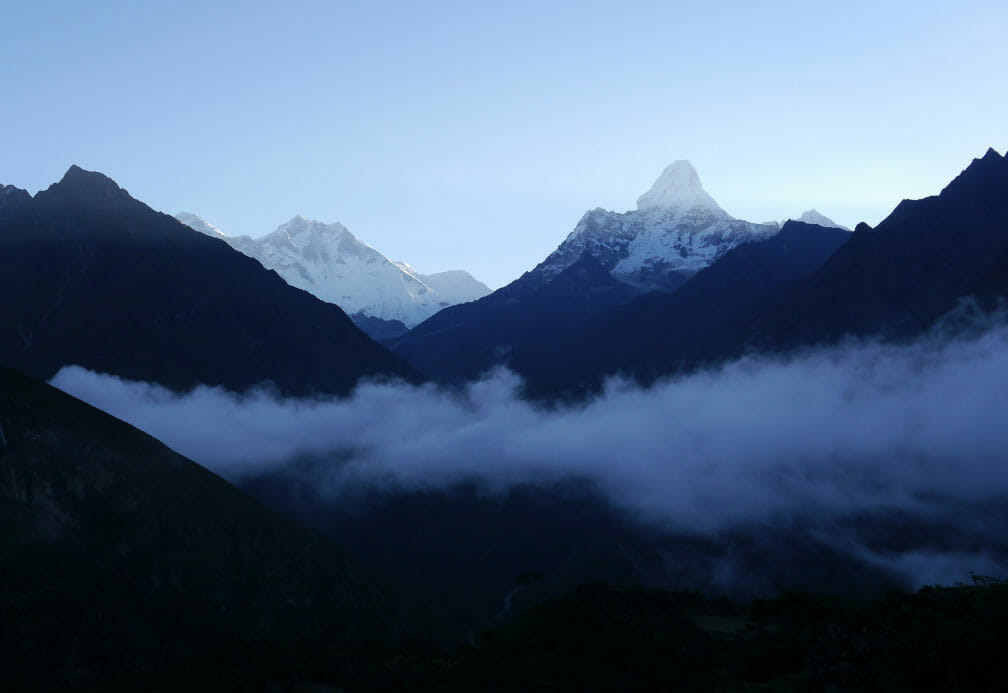 High in the mountainous regions of Nepal live 45,000 Sherpas – people of Tibetan origin best known for guiding western mountaineers on life threatening expeditions traversing rock, snow and icy crevasses at virtually uninhabitable altitudes. The harsh natural environment in which these Sherpas live plays havoc on the eyes. Yet, until late last year, little had been done to help prevent their failing sight.Now, behavioural optometrist Shaun Chang and colleagues are making the difference.

Last year Nepal – home to eight of the world’s 14 highest mountains – was visited by around 860,000 tourists who generated over AU$50 billion in income for the local economy. Twelve per cent of those tourists were there to climb, taking with them Sherpas from the local mountainous
areas as their guides.1

To attempt to summit Mt Everest in Nepal, climbers can pay anywhere up to AU$90,000. On average, the Sherpas who guide them on their way, protecting their lives as they go, earn around $6,000 across the entire climbing season, more if their customers reach the summit – it’s this money they use to feed, educate and care for their families throughout the year.2

Mr. Chang was inspired to help the Sherpa in the Khumjung Everest region of Nepal, because he said, without foreign support, they were at risk of unnecessary blindness.

“It is disheartening that very little has been done to look after the eyes of the Sherpa, who have helped so many mountaineers. It is likely that the eye conditions they suffer from could be preventable with help.”

“It is time we gave back to the Sherpa, whose selfless nature has saved many people from the mountains,” says Mr. Chang. “I was surprised to learn that some children in the village could not see the school blackboard and are in desperate need of eye treatment.”

Children in the area attend Khumjung Hillary School, the largest school in Khumbu and they live in settlements around the base of Mount Everest, at the highest elevations of any human habitation.3 Although the school has boarding facilities, many children walk hours every day to attend classes.

Pushing to Get In

Mr. Chang said the eye clinic was well received by the Sherpa community, with people pushing to try to get through the door, and some having to be turned away due to the volunteer team’s limited time and resources.

“Hospital director, Kamitemba Sherpa, and our guide, Angtshering Sherpa, helped spread the word prior to our arrival so people were aware that we were carrying out eye testing.

“We had a massive turn out, something not even the hospital director had anticipated… Every evening, the children would greet us as we were walking back to our lodges and everyone in the community knew who we were and thanked us for our work.

“I am not easily moved but I did find it quite heart-wrenching to see people literally pushing to try to get in the door. We were just too time-poor and exhausted to do any more so we had to turn many away.”

In total, the volunteers saw 150 patients over the two and a half days – 16 adults and 134 children ranging from ages four to 18. Mr. Chang said 38 of those people needed spectacle correction, of which 18 were to help improve their vision. Twenty pairs were dispensed to people who were long-sighted or accommodative insufficient, and required glasses to relieve headaches and eye strain.

“We did find uncorrected refractive errors such as myopia and astigmatism but it was not common. The majority of the children were latent hyperopes and the main complaint was headaches from near work,” said Mr. Chang. “We included motilities, near point of convergence, cover test and phoria in our battery of tests to determine if single vision near lenses were appropriate for the children who were symptomatic.”

The team identified some “very interesting” pathology such as corneal irregularities, macular dystrophy and two cases of nystagmus. “Pingueculae and Pterygium were a common finding in these children and we wonder if this was due to lots of UV exposure from the snow during winter,” said Mr. Chang. “It would appear that the majority of children were in more urgent need of sunglasses than spectacles.

“We also had an Ishihara 24 Plate colour vision test available to us during the screening and were surprised at the prevalence of red-green colour deficiency. “I am waiting to confirm this observation with the researcher who is processing the data. Fruit does not grow in Khumjung and Khunde so I wonder if the lack of need to determine ripeness has contributed to this deficiency.”

Conducting screening programs and handing out eyewear is one thing, but creating a sustainable eye clinic that can provide services in between visits by volunteer eye health professionals is another. Mr. Chang’s team focussed on training local hospital staff for the first two and a half days of their visit, prior to running the clinics.

“We trained a midwife, a hospital assistant and a nurse from a smaller district hospital,” said Mr. Chang. “Our aim was to build a solid understanding of the anatomy of the eye, anterior health examination, common eye conditions, the principle of refractive error and cataracts, and I felt that we did this well. Utilising their new-found skills over two and a half days further reinforced the learning. Our hope is that this education will empower them to be able to do a basic primary eye care examination – check vision, determine if poor vision is refractive in nature or pathology, do a basic anterior eye examination and check if the child has binocular vision. This solid grasp of the basics will provide a foundation to build on for the next trip.”

He said a request by hospital director Kamitemba to provide elementary training in refraction was not possible because of the more complex nature of refractions being seen among patients. Plans are in place, however, to send one of the previously trained hospital assistants to Kathmandu for refraction training, a process that will be funded by the Himalayan Trust.

Mr. Chang said the 2014 trip to Nepal was an enormous success but there is still much to be done and many learnings to take into account when planning the next visit.

“We have barely addressed the needs of the adult population… a bigger volunteer team is essential. One of our optometrist team-mates became ill with altitude sickness at 3,840m, which reduced our capacity to manage the patient load. I was in charge of objective and subjective refraction and occasionally MEM. There was no time to eat or drink because of the long queue. It would be better to have a larger optometrist team for the next Eyes4Everest trip and allocate more stations to refraction.

He said a schedule of appointments would ensure patients who had travelled long and far to access the clinic could be seen. “Some of these children had walked up to four hours to see us, but we were often
busy seeing the local children.”

A simple lifestyle questionnaire would improve the volunteers’ ability to take down case histories on their next visit, he said. “The language barrier was a challenge, especially when taking case histories. We had Sherpa and Nepali speaking hospital staff taking the patient’s details and asking them the questions; for instance: ‘Do you have trouble seeing the board?’ but we had no means of finding out more about their complaint.”

Mr. Chang said while cataract surgery was well catered for in the area by a team of Swiss ophthalmologists that visit biannually, the most basic primary eye care was lacking.

“I am looking for more members for the next Eyes4Everest team so we can do more in the newly established eye clinic. I am hoping to allocate people to vision screening, basic dispensing, binocular vision testing, refraction, and posterior ocular health testing. Most importantly, I want members to supervise the hospital staff, especially the newly trained refractionist,” he said.

Financing the first eye clinic at the Khunde Hillary Hospital was made possible by CR Surfacing Laboratories, the Australasian College of Behavioural Optometrists and Adidas Eyewear. Further financing must also be carefully thought through. “My plan next year is to have a research team with me so we can look at publishing a proper scientific journal article on this population. This would indirectly ensure that the hospital receives further funding. We will also have a film crew to shoot a short documentary about the issues here.”