I had a good night’s sleep, and was up bright and early, ready for my intraocular lens (IOL) surgery. As instructed, I (actually Suzanne) instilled a drop of mydriatic into my right eye one hour before the appointment time. The main thing I dislike about morning operations is that you can’t have anything to eat or drink after waking, and I love my early morning bowl of cereal. So, with rumbling tummy, Suzanne drove me off to the surgery, which is usually only 10 minutes away.

Chaos on the Gold Coast

We arrived at the surgery at 7.45am for my 8.00am appointment, to scenes of organisational chaos. But the chaos was not caused by any misdoing in the surgical clinic. It was a Friday, and day one of the V8 Supercars Gold Coast 600 race, which was playing havoc with local traffic. Unfortunately, the racing circuit was about a kilometre away, and there were road blocks and diversions everywhere. Surgeons, anaesthetists, nurses and patients alike were all running late. In the end, this caused a one hour delay, and I wasn’t taken through to the prep room until 9.15am. I donned my red hair net, dark blue gown and light blue shoe covers, and a black arrow was drawn on my forehead above my right eye. All set.

The admitting nurse asked if I had performed my diabetes checks that morning. She obviously didn’t appreciate the difference between type 1 diabetic patients (who need to monitor bloods regularly) versus type 2 diabetic patients like me (who generally check blood sugars very occasionally). She measured my blood glucose level, which was abnormally high at 7.8 mmol/L, especially since I hadn’t had anything to eat or drink since 7.00 pm the night before. She then measured my blood pressure, which was abnormally low for these circumstances at 110/70; I suppose I must be getting used to all this, so there is no more ‘white coat’ anxiety phenomenon. She instilled more mydriatic and some topical anaesthetic as well. I again issued my now customary warning on the admission form that the attending theatre staff should avoid bumping or leaning against the operating table during surgery.

I donned my red hair net, dark blue gown and light blue shoe covers, and a black arrow was drawn on my forehead above my right eye

The assisting surgeon (a first year ophthalmology resident) proceeded to mark my anaesthetised cornea to indicate IOL alignment. He said the target cylinder alignment was 89°. I thought this was off, because the minus cyl axis in my refraction is 175°. Could they have made a transposition error and were about to insert my cyl axis 90° off? Then I figured they must be working with the power axis rather than the cyl axis.

More mydriatics instilled, and I was directed to swallow two Panadol tablets. Apparently the anaesthetist on duty prefers this approach. A cannula was then inserted into my forearm, and I was lead through to the operating theatre. The anaesthetist told me there would be no retrobulbar block – just topical and subconjunctival anaesthesia.

The assisting nurse said ‘got a million frequent flyer points yet?’ I didn’t get the joke at first, but then realised she was referring to the fact that mine was a very familiar name, having been to this surgery five times now.

The anaesthetist then said that he saw my note about not bumping the operating table, and assured me that the surgical team would be specifically briefed about my concern. He then pumped in some sedative through the pre-inserted cannula. I recall feeling a little woozy within a few seconds.

Facial covers were put around my eye, and before I could say ‘Bob’s your uncle’, Bill appeared and got straight to work. I seemed to be wide awake this time, and was very aware of Bill ‘fiddling around’. This was different from when I had my vitrectomy four months earlier, when I was under such heavy sedation that I wasn’t really aware of anything. Noticing this difference, I said to Bill “Am I fully sedated?” He asked if I would like to be more heavily sedated, and before I could answer, he called for the anaesthetist to administer more sedative.

But after receiving this extra sedative, I still seemed wide awake. I was surprised not to hear the whirring of the phaco machine. I remember seeing vignettes of surgical instruments moving around in my anterior chamber, but that’s about it. All seemed to go very quickly. Bill apparently gave me an intraocular injection of Avastin for good measure, and before I knew it, I was being transferred to a wheelchair and taken through to the post-surgical room. I was given my customary coffee and sandwiches, which was nice, but I would have preferred a bowl of cereal!

After about 10 minutes, a tech walked me over to the slit lamp. She removed my eye patch, and everything seemed hazy and white out of my operated eye. I asked her to tell me what she was seeing (she knew who I was), and she reported observing slight corneal haze (probably oedema) and slight flare in the anterior chamber. My pupil was still large (obviously), and the IOL was sitting stable and correctly. All other signs were OK. The assistant surgeon joined us and declared that the surgery went well and as planned. I was then given my post-surgical medication regimen (Chloramphenicol and Prednisolone forte), and Suzanne drove me home, arriving at 11.30am.

By 12.45 pm, my eye was starting to feel a little sore. I took two Paracetamol/Codeine tablets, which made me feel a lot better (but very drowsy). Vision slowly began to return. Everything was initially a little blurry, but distance vision seemed reasonable! Then I thought – I hope they haven’t erroneously corrected me for distance instead of leaving me -1.75D for reading, which was the intended plan! A small bubble was visible for about three hours, and then resolved. Unsurprisingly, my flying angel of death was still present.

The following morning I received my customary telephone call from the tech to see how I was progressing. I reported that my pupil was still very large; I was experiencing slight discomfort and I had infero-temporal redness; but my eyelids were not puffy as they were following my previous vitrectomy surgery. The refraction seemed good, because I could now ascertain that things were clearer at arms’ length than in the distance. However, near acuity still seemed reduced, and although I could read text on my computer screen, it wasn’t sharp. The tech repeated the mantra that it can take a few weeks for vision to stabilise following IOL surgery, and up to 18 months following a vitrectomy. I really am hanging on to that hope.

When looking around inside my house, alternating viewing with my right and left eyes, I noticed that everything appeared a little darker and slightly browner with my unoperated left eye compared with my newly pseudophakic right eye. My favourite painting, Bushfire Dreaming, by acclaimed Yuendumu artist Maureen Hudson Nampajinpa, also looked different (Figure 1). I put this contrast down to the difference between looking at the world through an age-induced, yellowing, 59-year-old crystalline lens in my left eye, versus a clear acrylic IOL in my pseudophakic right eye. Apparently the chromophore tint in my IOL does not impact colour vision.1 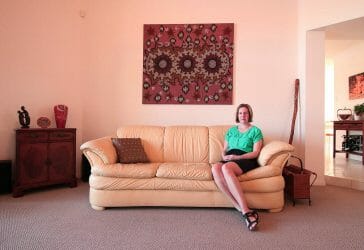 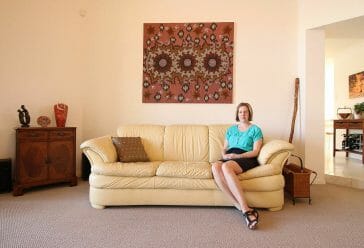 Figure 1. My wife, Suzanne, sitting beneath our ‘Bushfire Dreaming’ painting. Simulated appearance of this scene as viewed with my unoperated left eye, with its yellowing 59 year old crystalline lens (up), and my newly pseudophakic right eye, with its brand new, clear acrylic IOL (below).

I was now confronted with the conundrum of what to do refractively in the interim before my next scheduled surgery – a left eye vitrectomy – tentatively scheduled for two months away. I figured that wearing a distance contact lens in my left eye, and nothing in my right ‘reading’ eye, should suffice for generally getting around. With apologies to optometric colleagues reading this blog, I bought two pairs of ready-readers with prescriptions of +2.00D and +2.50D for computer and close work, respectively. Only $8.00 per pair! But maybe I shouldn’t feel guilty about buying ready readers; after all, it’s only an interim measure… and I bet every presbyopic optometrist has at some stage bought a pair of ready readers – say, in an emergency or when away on holidays having forgotten to take their reading glasses.

I popped out the right lenses of my varifocal and computer glasses for use when not wearing the contact lens in my left eye. This worked OK for my computer glasses, but I felt visually disoriented when wearing the single varifocal lens. I decided to try and wear my left contact lens all day if possible. I was already becoming anxious to get on with sorting out my left eye…