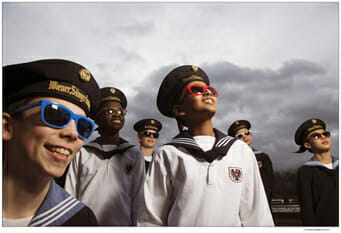 The four world famous Vienna Boys Choirs have been supplied with sunglasses and correction spectacles by German lens and frame manufacturer Rodenstock.

The 100 members of the choirs will wear ‘rocco by Rodenstock’ spectacles as official brand ambassadors.

The Vienna Boys Choirs were established in 1498 and each year the four Choirs make around 300 appearances, attracting approximately half a million spectators in almost every country of Europe as well as in Asia, Australia and America. “We are proud to represent Rodenstock as brand ambassadors and to take the company around the world with our appearance,” said Elke Hesse Director of the MuTH, the Vienna Boys Choirs’ concert hall. Rodenstock Austria Managing Director Clemens Moritzer said the two brands complemented each other “superbly as a result of their values”.

Rodenstock was established in 1877 and ‘rocco by Rodenstock’ was created in the sixties.

NSW Optom off for ‘Trip of a Lifetime’