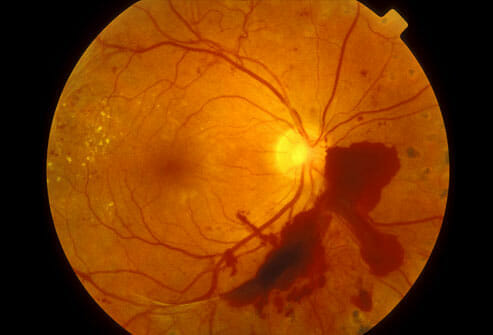 Doctors now have another tool to combat vision loss in the estimated 45,000 Australians over 35 years of age who have diabetic macular oedema (DME).1,2

The Therapeutic Goods Administration (TGA) has approved Bayer’s Eylea (aflibercept) in Australia for the treatment of DME in adults.3 In Australia, Eylea is also approved for the treatment of neovascular (wet) age-related macular degeneration (wetAMD) and visual impairment due to macular oedema secondary to central retinal vein occlusion (CRVO).3

The approval of Eylea to treat DME was based on the one-year-data from the Phase 3 VIVID-DME and two-year-data from VISTA-DME trials comprising 862 patients, which compared aflibercept solution for injection 2 milligrams (mg) given monthly, 2 mg given every two months (after five initial monthly injections), or macular laser photocoagulation (at baseline and then as needed).4

Patients treated with Eylea gained, on average, one line in best-corrected visual acuity (BCVA), as measured by the Early Treatment Diabetic Retinopathy Study (ETDRS) eye chart, after the first injection and the ability to read approximately two additional lines of letters within the first year, compared with almost no change in the control group.5 One third of patients gained three lines within the first year (range 31.1 per cent to 41.6 per cent, p<0.0001)4 and importantly, results were maintained at 100 weeks.3 The overall incidences of ocular and nonocular adverse events were similar across treatment groups.4

Retinal ophthalmologist, Dr. Andrew Chang said diabetic patients are at risk of developing some form of eye disease including diabetic retinopathy. “It is the most common cause of blindness for working-age Australians aged 30-69 years. For these patients, regaining central vision will have broad and real implications to their lives.”

“It may mean keeping their job and supporting themselves and their families, holding a driver’s licence and being able to read, watch TV and recognise faces,” said Dr. Chang.

DME is a microvascular complication of diabetes caused by the chronic high blood sugar levels secondary to the condition.4 It occurs when fluid leaks into the centre of the macula, the light-sensitive part of the retina responsible for sharp, direct vision.6 Early symptoms can include blurred or double vision, loss of contrast or patches of vision loss. If left untreated, DME can impact patients’ visual acuity and lead to severe vision loss and blindness.

“The approval of Eylea for those living with DME provides treating doctors with another tool to combat vision loss in their patients which is so important in supporting our aim of helping these Australians maintain their independence,” added Dr. Chang.

Eylea works by trapping excess vascular endothelial growth factor (VEGF) in the eye, which is overexpressed in patients with diabetes.6 Trapping excess VEGF limits the growth of abnormal blood vessels responsible for DME and hence reduces leakage and related vision impairment.7,8,9 Treatment involves one intravitreal injection per month for the first five consecutive months, followed by one injection every two months.3

Following the approval by the TGA, Bayer is working with the Government to secure timely reimbursement and listing on the Pharmaceutical Benefit Scheme (PBS) for Eylea in DME.

In addition to the Australian registration, Eylea is also approved for treatment of DME in the US, Canada, EU and Japan.

NSW Optom off for ‘Trip of a Lifetime’