Now For a Vasectomy

At this delicate stage of his ophthalmic journey of retinopexy, cryopexy, vitrectomy and IOL surgery, Professor Nathan Efron contemplates what might have been if his surgical records had been maintained electronically. 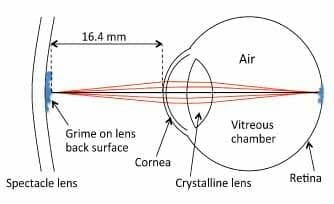 The AutoCorrect function in Microsoft Word can be so frustrating, don’t you think? As a fastidious blogger, I constantly strive to ensure my blogs are well written with correct spelling. To assist with this,

I usually type my blogs with AutoCorrect turned on. However, a constant challenge that I (and other technical writers) face is that AutoCorrect often does not recognise scientific or medical words, and substitutes these with its closest guess. When writing this blog, AutoCorrect did not recognise the word ‘vitrectomy’, and kept replacing it with ‘vasectomy’.

My attempts to force AutoCorrect to recognise ‘vitrectomy’ failed; I have never managed to sort out custom dictionaries. This was driving me crazy, so as a two-fingered salute to Microsoft, I have left the title of this blog the way AutoCorrect insisted it should be. I suppose I should be thankful that the surgical staff didn’t prepare their pre-operative notes for my forthcoming vitrectomy electronically
using AutoCorrect… otherwise I might have ended up with a very unexpected surgical outcome!

While munching on my post-surgical sandwiches and biscuits, and sipping coffee in the recovery room, I realised I had become
a bit of a celebrity

Primum Non Nocere
Primum non nocere is a Latin phrase that means ‘first do no harm’. Non-maleficence, which is derived from this maxim, is a principal precept of medical ethics that all trainee doctors are taught and is a fundamental principle for emergency medical services. Another way to state it is that, given an existing problem, it may be better not to do something, or even to do nothing at all, than to risk causing more harm than good. It is invoked when contemplating the use of an intervention that carries an obvious risk of harm but a less certain chance of benefit.

This principle was of immediate relevance to my pending epiretinal membrane peel, which was to be conducted in conjunction with the vitrectomy in my left eye, especially following my previous ‘flying angel of death’ (small focal vision loss) experience in my right eye. I am also mindful of anecdotal blogs and scientific literature describing vision deficits following such procedures. I discussed this at length with Bill prior to surgery. His view, as before, was that the membrane would probably keep progressing, so it was better to do the peel earlier rather than later.

I started to wonder: if both eyes had a peel resulting in tiny ‘gaps’ in the visual field of each eye, would gaps in one eye be compensated by corresponding healthy retinal regions in the other eye? Probably not, I concluded. Maybe the deficit in my right eye was a freak event, unlikely to be repeated… Certainly, the appearance of a flying angel of death in both eyes would be disastrous. Anyway, I decided to put my faith in Bill and let him do as he thought best. Bill said he would peel the membrane more peripherally, but spare the macular region if the membrane was not lifting easily. He also said he intended inserting an air bubble (rather than silicone oil) at the end of the operation, like last time, which pleased me.

The day scheduled for my vitrectomy was our wedding anniversary and Suzanne’s birthday. Hopefully, I thought, that would be a good omen (not that I am superstitious)!

I will not bore you once again with details of the pre-surgical work-up. I have described this ad nauseam in previous blogs, and everything was basically the same this time, including my customary warning for theatre staff not to bump the operating table during surgery (further to my earlier episode which has clearly scarred me for life). However, there were a few interesting differences…

Presumably sensitive to the anxiety I suffered arising from complications following my previous right eye vitrectomy, the anaesthetist suggested a general anaesthetic. After some discussion, we instead agreed that a deep sedation, as used previously, would be preferable. However, the sedation must have been heavy, because I hardly remember anything that happened during the procedure. All I remember is Bill twice saying, “Now don’t move, Nathan”. I have no idea what I was doing that constituted excessive movement, but each time he uttered this, I said “OK” and concentrated, as much as is possible under heavy sedation, on staying still.

As I was being wheeled out of surgery, Bill said everything went very well, and his assisting surgeon confirmed this, noting that the entire epiretinal membrane had been removed. It apparently came off easily. This set off alarm bells in my mind, because there was now the possibility that I would end up with another flying angel of death. Well, we’ll have to wait and see.

In the recovery room following surgery, I produced some unopened bottles of eye drops left over from last time – everything except antibiotic. I had unused Pred Forte, Homatropine, Azopt, and Lacrilube. The nurse had a spare unopened bottle of Chlorsig, and gave that to me gratis. Thus, by not having to buy all those drops again, I saved over $100.

While munching on my post-surgical sandwiches and biscuits, and sipping coffee in the recovery room, I realised I had become a bit of a celebrity. Apparently, most of the attending nurses had read one or more of my blogs that had already been published in mivision. Two actually presented for a chat with the journal in their hands. This made me aware that anyone in the eye industry could be reading these blogs, and that I had better be careful, to some extent, about what I write in future!

The assisting surgeon removed my patch, inspected my eye with a head-borne indirect ophthalmoscope, and declared that all looked fine. I was given my ‘posturing’ instructions: head down every 30 minutes for 30 minutes at a time, for three days (I will have a lot more to say about this most unpleasant procedure in my next blog). I was also advised to wear an eye patch and protective plastic shell until the following morning, when I would be required to start my eye drops regime, and to sleep on my right cheek for the next few days.

I had arrived at the surgery at 6.30am and was out at 8.30am. Apparently the actual procedure took just under one hour. As soon as I got home I noticed subtle entoptic phenomena, even though my left eye was closed and patched. If I looked up, I saw what seemed like a superior shimmering line of water. My nose was running quite
a lot, especially when down-posturing… I’m not sure why.

By early afternoon my eye was starting to feel a little uncomfortable, with a tender sensation during blinking, presumably because the anaesthetic was wearing off. I decided to take some codeine/paracetamol tablets, which helped a lot, but made me feel very drowsy.

A Bit of Optics for You

By late afternoon, the eye patch was becoming very annoying and uncomfortable, so I decided to remove both the patch and protective shell and just wear my glasses (but sleep with the shell in place). It was then that I noticed a bizarre phenomenon out of my operated eye – huge big gelatinous blobs. What could this be?

To explain this, let me fast forward two weeks, when I was back in my office at Queensland University of Technology. Fortunately, the person who occupies an office immediately adjacent to mine is Professor David Atchison, an eminent, world-renowned expert in visual optics. David loves a challenge, and within a few minutes produced an optical ray tracing diagram through a schematic eye to explain what was happening (Figure 1). Simply put, David constructed a classical 4-surface Le Grand schematic eye and replaced the 1.336 vitreous refractive index by 1.0, corresponding to air, which now filled my vitreous chamber. The result was that my eyeball was acting like a whopping +61D magnifying glass, with a working distance from the front of my cornea of 16.4 mm, which by sheer coincidence roughly corresponds with the back vertex distance of my glasses! This confirmed what I thought I had been looking at when I first noticed these big ‘gelatinous blobs’ – they were in fact minute spots of grime on the back surface of my spectacle lens! It also confirmed my observation that the blobs moved synchronously with slight movements of my glasses.