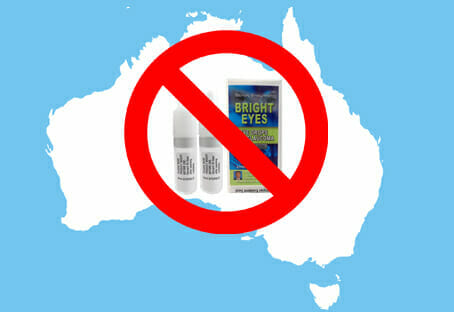 Health professionals should advise any consumers using Bright Eyes eye drop products to discontinue use and take any remaining product to a pharmacy for safe disposal, according to a statement by Therapeutic Goods Administration (TGA).

Bright Eyes eye drops have been promoted in Australia as a treatment for glaucoma and cataract yet they have not been evaluated by the TGA for safety or efficacy (effectiveness).

This is not the first time that Bright Eyes has attracted negative attention. In 2014, mivision reported that an internet advertisement used to promote Bright Eyes Eye Drops For Glaucoma has breached sections of the Advertising Code, according to the Australian Therapeutic Goods Association (TGA).

The advertisement, which ran in June 2013 featured the headline “Bright Eyes Eye Drops For Glaucoma” followed by the subhead “Control and medicate ‘The Sneak Thief of Sight’”.

An anonymous complainant had objected to the advertisement, citing that it breached sections 4(2)(b), 4(2)(c) and 4(6)(b) of the Code.

In a safety advisory announcement posted on its website on 11 March 2015, TGA stated, “Overseas-based websites are selling products called ‘Bright Eyes eye drops for Cataracts’ and ‘Bright Eyes eye drops for Glaucoma’. Some of these websites may create the impression that they have Australian-based operations.
“As with many therapeutic goods being sold on the internet, these products:

The announcement continued: “The internet can offer consumers a convenient way to access therapeutic goods, but online purchases of medicines or medical devices should be approached with caution.”