The Story behind that Photo 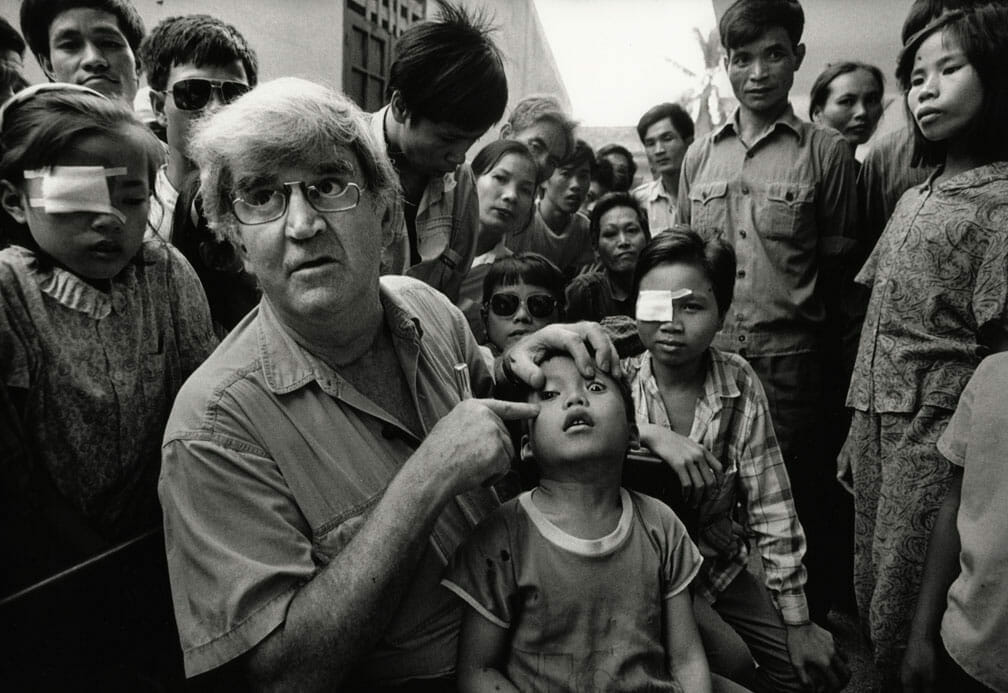 It’s a fair bet that most Australians would recognise the black and white photo of Fred Hollows, crowded by onlookers, pointing to the eye of a young Vietnamese child.That moment, and its immortalisation on film, sent two lives – that of the young child and that of the photographer – spinning off on completely new trajectories.

Every so often an image is produced that defines an era, an event, a product… a person. There are the photos that are so brutally shocking they burn their way into our brains: think of 9/11’s ‘Falling Man’; the ‘Napalm Girl’ of the Vietnam War; Tiananmen Square’s ‘Tank Man’.

There are photos that are instantly recognisable because they are just, well, ubiquitous: the photo of blue sky and rolling hills used as the default computer wallpaper by Microsoft, for example.

Then there are photos that define generations: the American sailor kissing a woman in Times Square on Victory over Japan Day in 1945; the hippie couple, wrapped in embrace and a bedraggled blanket at Woodstock in 1969.

One such image, which perhaps defines both a man and his eponymous Foundation is a black and white shot of Fred Hollows, surrounded by Vietnamese villagers, pointing to the eye of a young Vietnamese boy.

It was taken by Michael Amendolia in 1992 just before the death of the esteemed Australian ophthalmologist on his last sight-saving field trip. Then a young News Limited photographer, Amendolia was on his first international assignment.

As the recipient of sight restoring surgery immediately after the famous photograph was taken, there’s no doubt that nine-year-old Tran Van Giap’s life was transformed. But the life of another man was also changed that day – that of the photographer.

As a young staff photographer at Sydney’s Daily Telegraph, Amendolia was sent on assignment to travel with a journalist and Professor Hollows on his mission to train Vietnamese eye doctors
in modern cataract surgery.

Suffering from cancer and very ill, Professor Hollows had just been released from hospital and had been cleared to go.

Shot in black and white, the photo was taken on the first full day, and was one of a series of negatives developed by Amendolia in a makeshift darkroom set up in his hotel bathroom. Sent back to News Limited over a dodgy telephone line via a now archaic technology, the picture was selected to accompany a feature article in News Limited papers across Australia.

“At the time, I thought it was a good photo,” Amendolia recalls, “little did I realise that it would become that famous. There are not that many pictures that become that well known.”

Amendolia attributes the success of the photo to a number of factors. The first is the relative scarcity of photos of Professor Hollows on his field trips. “If that photo was taken today, everyone would have a million and one photos,” he said.

Also, although Prof. Hollows was in and out of the operating theatre, he wasn’t doing surgery: he was “far too ill to be operating”.

“It’s actually quite hard to take good ophthalmological photographs. It’s very limited in its photo opportunities because half of the things that ophthalmologists do are quite unpalatable to look at and take pictures of,” Amendolia said.

“In the afternoon, Professor Hollows walked around a courtyard outside the surgical rooms looking with a torch light at the eyes of patients waiting to be seen. Large groups of people were gathering… I was clustered on the ground close to Professor Hollows and I believe it was around that moment that a few children had been pushed up before him and Giap came up to Prof. Hollows. He looked at his eye and suggested then that Giap’s problems were trauma and were complicated. He straightaway organised for Dr. Sanduk Ruit from Nepal – one of Professor Hollows’ training surgeons – to examine and to operate.”

The photo appeared in News Limited papers across Australia, but it was not until the 2000 Olympics when the fame of the photo gained momentum.

But well before the photo had achieved fame, it had already changed Amendolia’s career trajectory.

On the Vietnam outreach, Amendolia struck up a rapport with both Professor Hollows and his colleague, Nepali ophthalmologist Dr. Sanduk Ruit. Prof. Hollows encouraged Amendolia to accompany Dr. Ruit “on a profound journey” to Mustang, a remote province of Nepal, which had only just been opened up to foreigners.

“We were part of the first medical team to go in, so I went on this trip and took photos. I know Fred Hollows would have loved to have gone. I went off with Ruit, with Fred in the back of my mind. When we returned, Fred invited 50 or 60 friends and we packed into his lounge room and I showed all these photos and Fred was like the ringleader in the room.”

Amendolia said that first trip to Vietnam has since “evolved into 20 years involved, in one way or another, with international preventable blindness stories and the Fred Hollows Foundation”.

In 2012, he returned to Vietnam with Fred Hollows’ widow Gabi Hollows, to follow up on the story of the boy in his photo. Giap was newly married, teaching and studying mathematics, and motivated by his good fortune in meeting Fred Hollows “to become a good man for the society”. Once again, Amendolia photographed him.

“The portrait of him I wanted in 2012 was to be with his year 12 maths class… I wanted to make a portrait of him that represented what he had achieved 20 years after his surgery. Before the portrait I photographed him riding his motorbike to his home, with his wife Binh at a cafe, working in the classroom with his students.

“It was really great to see him after all this time, it’s not often you have a photograph that is so useful to so many people for such a long time. I don’t think it is about to end, the influence of that photograph or the work to avoid preventable blindness in Vietnam and the developing world.

“I would say that photo profoundly changed the whole direction firstly of my career, but also my life. It’s all encompassing because my life and my work are so intertwined.”

After leaving News Limited, Amendolia joined an international photo agency and travelled more extensively. Since then, he has photographed eye health missions in places like Tibet, North Korea, Butan, and Ethiopia – just to name a few.

Depression: The Dark Side of Vision Loss

Optical Dispensers Go Back to Hand Edging to Help Others