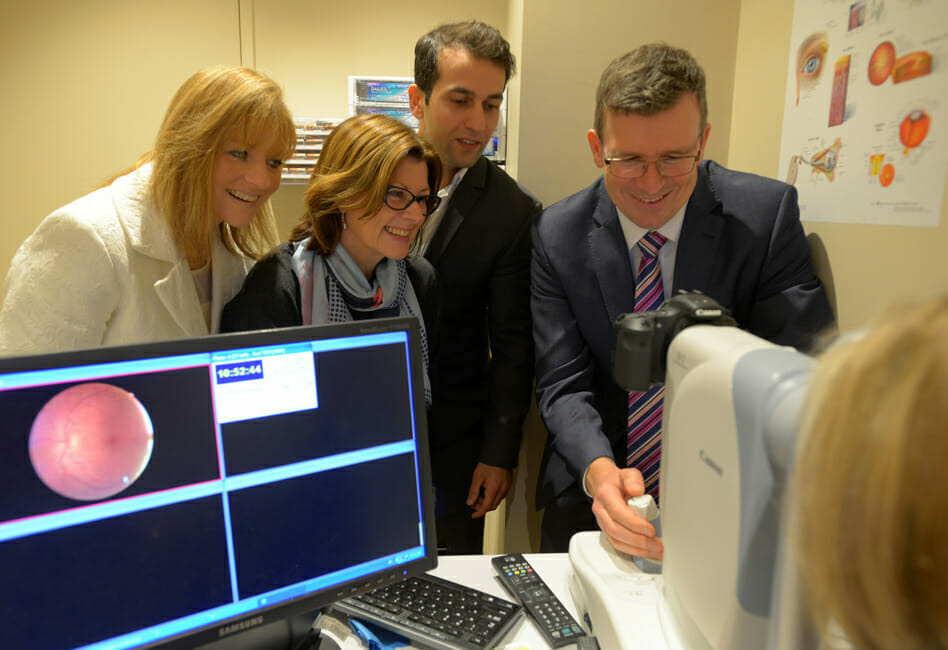 Launched at the Knox City OPSM store in Victoria on 12 June, the Survey is the first research of its kind to map the prevalence of major eye conditions in Indigenous and non-Indigenous people across Australia.

Vision 2020 Australia CEO, Jennifer Gersbeck, said the results from the testing site in Victoria’s south eastern suburbs was an important part of the research and would help deliver a piece of the Australian eye health picture.

She said Australia’s eye health was more at-risk as the population aged and as the diabetes epidemic continued to grow.

“As Australia’s population ages we expect to see an increase in the number of people with conditions such as macular degeneration, glaucoma, cataract, diabetic retinopathy and refractive error. Being armed with accurate data will help us to manage these conditions efficiently and effectively,” said Ms. Gersbeck.

Ms. Gersbeck said the NEHS was also critical in assisting Australia to meet its international obligations to the WHO’s Global Action Plan (GAP), which sets a target to reduce avoidable blindness by 25 per cent by 2019.

To achieve this goal, the Minister for Health last year endorsed a National Framework Implementation Plan on eye health and vision care, prioritising the improvement of the evidence base.

“The NEHS will help establish a baseline for tracking Australia’s progress against the GAP and will provide an essential evidence base for the National Framework Implementation Plan,” she said.

Principal Investigator, Dr. Mohamed Dirani said: “Health interventions and future programs are being planned and implemented based on 20 year old data. The National Eye Health Survey will give us an up to date, evidenced-based picture of the prevalence and causes of vision impairment in Australia.”

“The project will be completed in mid-2016 with the eye health of both non-Indigenous and Indigenous Australians being tested across 30 sites, including urban, regional and remote parts of the country.”

“The results of the research will also provide invaluable follow up data for the National Indigenous Eye Health Survey conducted in 2008, where the effects of interventions since then can be assessed and specific eye health strategies for Indigenous communities can be better guided.”

The comprehensive The National Eye Health Survey is a collaborative effort between government, non-government and the private sector to achieve better eye health and vision care outcomes for Australia. It is funded by the Australian Government under the Chronic Disease Prevention and Service Improvement Fund, with other contributions coming from CERA, OPSM, Novartis, Zeiss, Brien Holden Vision Institute, Optometry Australia, NACCHO and the Royal Flying Doctor Service.