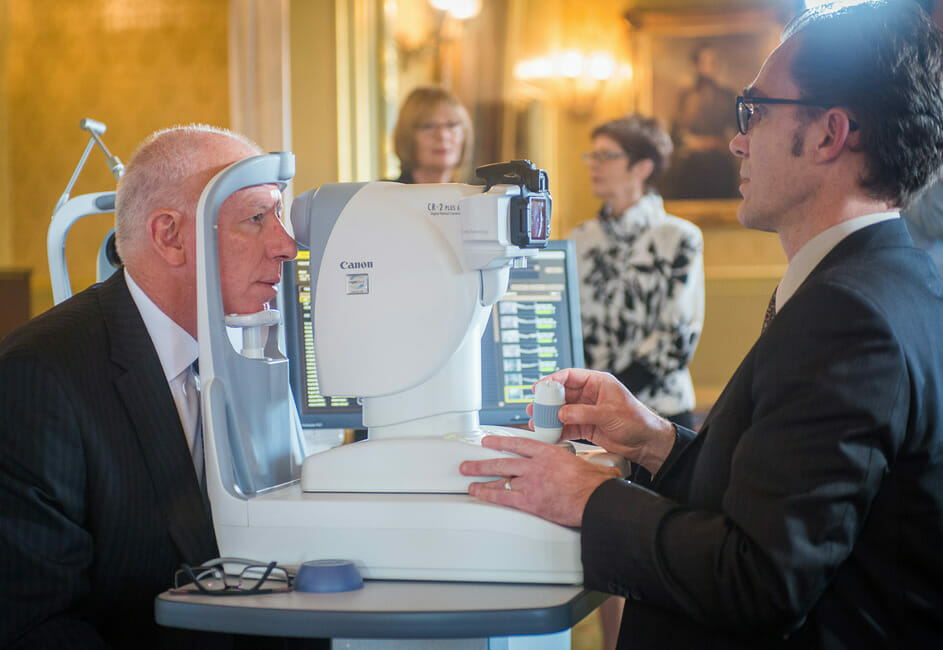 State Governors across the country have joined Macular Disease Foundation Australia to encourage people at risk of macular degeneration to see their optometrist or ophthalmologist for an eye test and macula check.

The occasion was Macular Degeneration Awareness Week 2015 (24 to 30 May), the Foundation’s annual awareness campaign which highlights the importance of early detection of macular degeneration.

State Governors agreed to be Custodians of Vision by having their eyes tested and macula checked as part of the week long campaign.

His Excellency stated that he had good reason to be a Custodian of Vision. “I am fortunate to have had good eyesight my entire life. This has helped me to fulfil the responsibilities of my previous military career, as well as the everyday activities we all undertake,” said the Governor of New South Wales.

Also recognising the risk factors associated with ageing was Her Excellency the Honourable Kerry Sanderson AO Governor of Western Australia.

Having had her macula checked by Associate Professor Dimitri Yellachich at Western Australia Government House the Governor said, “I’m really pleased to be a Custodian for Vision for Macular Degeneration Awareness Week. I’m over 50, and as this is one of the major risk factors for macular degeneration, I know I need to have regular eye tests.”

Prevention strategies were of interest to His Excellency the Honourable Hieu Van Le AO, Governor of South Australia who visited the surgery of Dr Grant Raymond in North Adelaide.

Speaking of this visit, CEO of the Foundation Julie Heraghty said, “The Governor was very well aware of the importance of eating an eye friendly diet, not smoking, and leading an active lifestyle. That meant in addition to drawing attention to the importance of having your eyes tested and macula checked, we were able to highlight to the people of South Australia the diet and lifestyle measures that can be undertaken to reduce the risk and delay progression of macular degeneration.”

In Victoria, it was the technology used to detect macular degeneration that captured the interest of His Excellency the Honourable Alex Chernov AC QC Governor of Victoria and Mrs. Elizabeth Chernov when they visited the surgery of Associate Professor Wilson Heriot of Eye Surgery Associates.

Associate Professor Heriot and his staff took the Governor and Mrs. Chernov through the consultation process and spoke at length about the rapid development and use of state of the art technology in eye testing, followed by a test of both the Governor and Mrs Chernov’s eyes.

In Tasmania Associate Professor Nitin Verma welcomed Her Excellency Professor the Honourable Kate Warner AM Governor of Tasmania and her husband Mr. Richard Warner to his Hobart Eye Surgeons practice. Speaking of her role in generating awareness of macular degeneration, the Governor said, “I’m delighted to be Custodian of Vision for Tasmanians for Macular Degeneration Awareness Week. It’s important to have testing because so often early intervention really matters, and can have very positive outcomes.”

Ms. Heraghty said the support of Australia’s State Governors had contributed enormously to the success of Macular Degeneration Awareness Week. “We are honoured the State Governors agreed to be Custodians of Vision for Macular Degeneration Awareness Week 2015. Their support in having an eye test and macula check has greatly assisted the Macular Disease Foundation Australia in raising awareness across the country,” she said.

Macular Degeneration Awareness Week has been a major annual awareness activity for the Macular Disease Foundation Australia for the past 12 years, with the aim being to raise awareness of macular degeneration amongst Australians over 50, those with a direct family history, and those who smoke or who have smoked, and to promote the importance of an eye test and macula check.