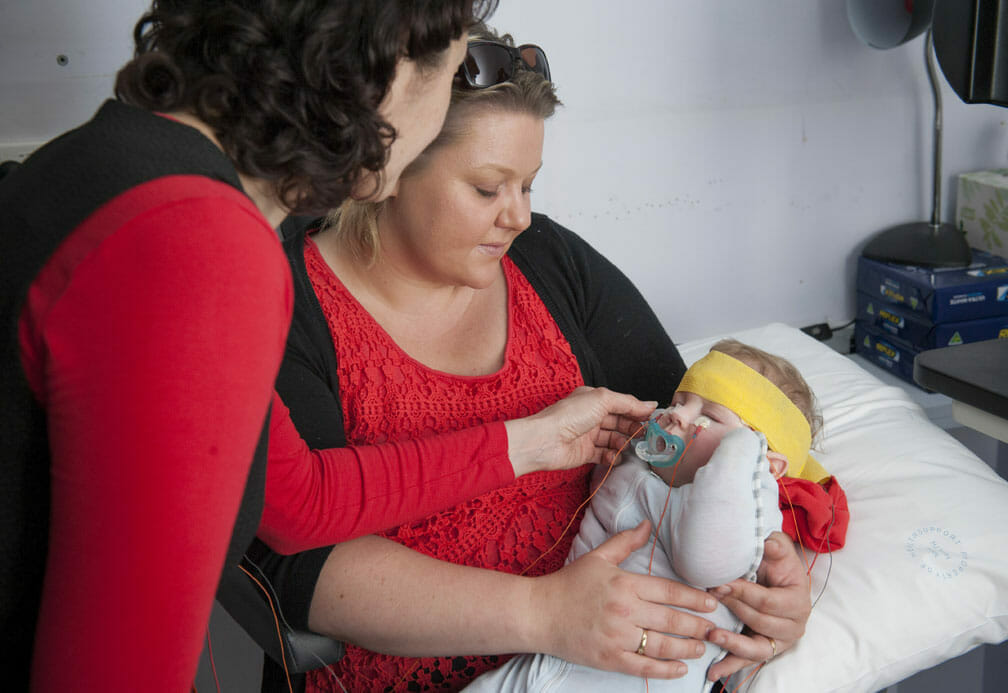 Screening of young Australians as well as innovative approaches to eye health and research is changing the futures for generations to come.

Success for NSW Vision Preschool Screening Program A review of the New South Wales Statewide Eyesight Preschooler Screening (StEPS) program has found it to be a successful visual acuity testing program which “may prevent potentially permanent loss of vision in a significant number of children”.

The paper published in the Medical

Journal of Australia, recommended that the model may be useful for other jurisdictions in Australia and overseas and would “ideally exist as part of a universal comprehensive health screening program before school entry”.

All states of Australia offer some form of vision surveillance or screening, either before school entry, or for children at risk, or for those who have a concern about their vision. However, to date, participation has been lower than ideal because these screening programs rely on children attending regular health checks which in turn relies on parental vigilance.

Improved outcomes at this time have a lifelong impact through improved work opportunities, quality of life and better prospects for withstanding the impact of degenerative eye conditions in old age.

The StEPS program differs in that it is free and administered by local health districts (LHDs) who pro-actively screen four-year old children (and five-year olds not previously screened) attending preschools, childcare and other children’s services.

The review of the StEPS program looked at two LHDs and found that 88 per cent, or 80,328 of the 91,324 eligible four-year olds in NSW were offered screening. Of these, the parents of 71,081 children (88.5 per cent) of their parents consented to the screening; 2.2 per cent of parents declined because their child had already received vision screening; 65,834 children (72.1 per cent) of the eligible population were screened, with 52,870 children (80.3 per cent) passing the test; 9.7 per cent receiving a “borderline pass” and 9.8 per cent referred to their GP or eye health professional for further assessment.

Of the 6,421 children referred on, 3,867 were routine referrals, 1,425 were high-priority referrals and 1,129 were children who had been unavailable to be screened on the day.

Researchers said that the two LHDs with the most complete follow-up data for the study period (one rural and one metropolitan) were reflective of NSW. These two groups achieved an average follow-up of 95.7 per cent. They reported “of 304 children with high priority referrals, 28 per cent were later diagnosed with amblyopia; 44.1 per cent were prescribed glasses and 5.6 per cent were diagnosed with other vision disorders including cataract, ptosis; glaucoma and nystagmus”.

Comment
One of the challenges in managing eye problems in children is that not only do we have to manage the condition but the condition is occurring when the visual system is developing. This means that if not treated in an appropriate time frame the condition will interfere with normal visual development and result in lifelong vision impairment. The ocular conditions identified by screening programs fall into two broad groups. The first being refractive error, strabismus and amblyopia. The second group includes developmental eye conditions such as congenital cataracts, congenital glaucoma, inherited retinal dystrophies, neurophthalmic disorders including optic atrophy and optic nerve hypoplasia. For the first group early intervention may be able to restore or prevent permanent visual loss. The second group requires early and then often ongoing management to assist in achieving the best visual potential despite many of these conditions having treatments that are only partially successful. For many no effective treatment exists so visual support services are required early.

Screening helps identify these potentially blinding eye conditions in this crucial age group when intervention has the most impact to improve or restore sight. Improved outcomes at this time have a lifelong impact through improved work opportunities, quality of life and better prospects for withstanding the impact of degenerative eye conditions in old age.

Researchers have concluded that a binocular approach to treating amblyopia, using dichoptic iPad game play, may be a more effective treatment for preschool children with amblyopia.

Patching treatment, which is based on the premise that amblyopia is a monocular disorder, forces the patient to use the amblyopic eye. This has been shown to improve visual acuity in 73–90 per cent of amblyopic children. However, according to Professor Eileen Birch an author of Binocular iPad Treatment for Amblyopia in Preschool Children, 15–50 per cent of those treated fail to achieve normal visual acuity after months or years of treatment. Among those children who achieve high visual acuity, there is a high risk of recurrence.

More recent studies have lead researchers to suggest “amblyopia is a monocular consequence of a primary binocular obstacle to normal visual development”.

The experiment by Prof. Birch and colleagues involved 50 amblyopic children aged 3–6.9 years living in America. Five of the study group were assigned to sham iPad games and 45 assigned to binocular iPad games for at least four hours every week for four weeks. Patching at a different time of the day was also used
to treat 30 (67 per cent) of the binocular iPad game players and four (80 per cent) of the sham iPad game players.

Children played any or all of four binocular iPad games wearing their spectacles as well as red-green anaglyphic glasses, with the green lens over the amblyopic eye. The games were presented so that a high contrast red graphic was visible to the amblyopic eye and a low contrast green graphic visible to the fellow eye. For all four games the amblyopic eye contrast was set at 100 per cent. The fellow eye contrast was set to 15–20 per cent initially and increased by 10 per cent each day, based on the child being able to play the game successfully and in doing so, demonstrating their ability to combine information from both eyes to play the game.

If the child was unable to successfully play the game the fellow eye contrast was reduced by 10 per cent the following day.

Children in the sham group also played dichoptic iPad games however the contrast was reversed so that reduced contrast images were presented to the amblyopic eye and high contrast images to the fellow eye.

The researchers found that “children who played the binocular iPad games for 8–18 hours over four weeks had visual acuity improvement similar to that achieved by patching for two hours daily for four to six weeks (56–84 hours patching) in studies that required spectacle wear for one to four months prior to baseline. About 40 per cent had improvement of 0.2 to 0.4 logMAR (2 lines) and 15 per cent achieved visual acuity of 20/20 in four weeks.” They noted that previous studies of dichoptic game play with reduced fellow-eye contrast involving adults and children with amblyopia had achieved similar improvements in visual acuity.

Comment
Amblyopia, which is the reduction in visual acuity due to abnormal binocular cortical interactions, may result from refractive error, strabismus or deprivation of visual inputs. Once the underlying precipitating condition has been corrected the effects of the abnormal binocular input needs to be addressed. Traditionally occlusion therapy with a patch or penalisation with atropine eye drops to the ‘good’ eye is required. With good compliance the vision can be restored in the affected eye. However the challenge is gaining the cooperation from the child and support from the parents in a modern busy household.

Innovations in ways to assist with amblyopia in this challenging age group are welcome.

Timing of surgery, primary implantation and additional intraocular surgery can impact the risk for postoperative glaucoma following infantile cataract surgery, according to Professor Asmina Mataftsi from the School of Medicine at Aristotle University of Thessaloniki in Greece.

Professor Mataftsi and colleagues conducted a systematic review of studies reporting on postoperative glaucoma in infants undergoing cataract surgery who had received regular follow up for at least one year. They aimed to “assess the effect of the timing of surgery and of primary intraocular lens (IOL) transplantation during cataract extraction among infants on the incidence of postoperative glaucoma”.

Seven medical centres (three from the United States; one from Canada, one from the UK and one from Australia) contributed data on 470 infants (659 eyes). Surgery was performed at a median age of three months and the median postoperative follow up was six years. Eighty participants underwent surgery before reaching four weeks of age. The assessed eye in 106 infants was pseudophakic and in 364 infants was aphakic. Postoperative procedures had been performed on 111 (24.2 per cent)
of the infants.

The researchers reported “that cataract surgery during the first year of life bears a significant risk for postoperative glaucoma”. They noted that studies differed as to whether primary implantation of an intraocular lens reduced the risk, similarly studies as to whether surgery during the first weeks of life were associated with a higher risk of postoperative glaucoma were contradictory.

Professor Mataftsi and colleagues proposed several reasons for the contradictory results, including differences in glaucoma definition, length of follow up, subcategorisation of age at surgery and inclusion of eyes with other anomalies.

They wrote that it “was difficult to distinguish” the effect of surgery in younger vs. older patients and aphakia vs. primary pseudophakia. “Thus no consensus exists on the optimal timing or surgical technique and surgeons have to make decisions with significant consequences without having solid evidence on which to base them.”

The authors concluded that “post-operative glaucoma risk appears to be associated not only with surgery within the first month of life vs. surgery later, but also with additional intraocular surgical procedures subsequent to the cataract surgery and before glaucoma diagnosis or last follow-up. Our evidence suggests that pseudophakic eyes appear to have a reduced risk for early- to intermediate-onset glaucoma.”

Comment
This paper examines some of the challenges in managing children with cataract. Although the surgery has greatly improved and the option to use intraocular lenses in children has gained popularity, questions have remained regarding the safety of intraocular lenses in children less than two years of age. Recently the infant aphakia treatment trial results, reporting on a randomised trial comparing contact lens correction with intraocular lens use in children, found that there was no difference in visual outcome between the two groups. However there was a greater number of complications in the intraocular lens group with the main issue being a need to re-operate for visual axis/posterior capsule opacification. The study has suggested that unless other issues such as compliance with contact lenses or potential glaucoma risk is anticipated
then contact lenses are the first choice.

The study by Mataftsi has examined the risk for developing glaucoma in this group of children who have had paediatric cataract surgery. Aphakic glaucoma remains a lifelong risk for these children. So lifelong monitoring is required for this initially asymptomatic condition. The findings from Mataftsi, which brings together paediatric cataract outcomes from around the world including my own centre, has found that children who had primary intraocular lens implantation have a reduced risk for early to intermediate aphakic glaucoma. These results will assist the paediatric ophthalmologist in the decision making process deciding whether primary intraocular lens implantation will provide better long-term outcomes than contact lenses.

Associate Professor John Grigg is the Head of the Discipline of Ophthalmology at Save Sight Institute, Sydney Eye Hospital Campus of Sydney Medical School. He is a consultant ophthalmologist at Sydney Eye Hospital and Honorary Visiting Medical Officer at the Children’s Hospital Westmead. He has interests in genetic eye disease, glaucoma, ocular electrophysiology, children’s eye disease and laser assisted cataract surgery.