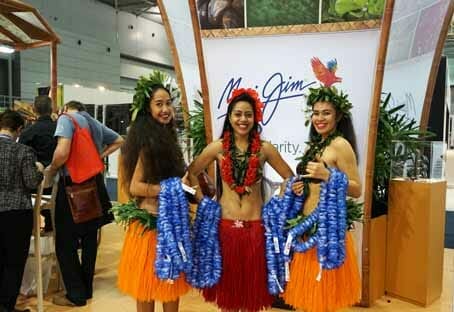 ODMA returned to Brisbane for only the second time, achieving a successful balance of exhibitor displays, education, entertainment and awards for all sectors of the independent optometry industry. In many respects the success or otherwise of ODMA is a bellwether for independent optometry, given the continued growth of corporate and franchised optometry in Australia.

ODMA 2015 fittingly occurred during the celebration of Independence Day – American that is, a fact that did not escape the organisers with their renewed focus on the promotion of independent optometry. Numbers were consistent with the previous ODMA which is a strong affirmation of ODMA’s organisation in a world where large multi-day exhibitions are struggling to maintain numbers.

To paraphrase Mark Twain “the reports of the death of independent optometry have been greatly exaggerated”.

Growing competition for the delivery of quality professional education was surely behind the excellent line up of speakers and topics at the ‘Fabulous Friday conference’ at which optometrists could gain up to 30 CPD points. This year all presentations were on the Friday, leaving Saturday and Sunday free for attendees to meet with suppliers.

Approximately 450 optometrists attended the conference program, the highlights of which included outstanding presentations by keynote speaker Professor Minas Coroneo, Chair of the Department of Ophthalmology, University of New South Wales on management of dry eye and pterygium induced astigmatism, and an interesting and entertaining overview of the importance of sunglasses to both eye health and the income of optometrists by Maui Jim’s David Burch. Mr. Burch replaced Optometry Australia National Vice President Kate Gifford who was ill.

Richard Grills, Optical Distributors and Manufacturers Association (ODMA) Chairman remarked “while this has been our best educational program ever, I have a vision for the future of even better programs attracting up to 1,000 attendees… a strong education program is critical to the success of the entire ODMA program”.
Mr. Grills’ chairing of the conference program was outstanding and his personal knowledge and experience enhanced the program significantly.

Of the very large stands, Eyes Right Optical stood out in the centre of the exhibition hall matched only by the combined presence of Essilor Australia through its Essilor stand and its subsidiary company stands under the Prescription Safety Glass, Sunix, City Optical, OSA and Wallace Everett banners.
But size is not everything and it was pleasing to see the growing number of small distributors of frames and accessories lining the outer edges of the exhibition hall and snapping at the heels of the establishment with their innovative new products and services.

Maui Jim provided their usual mix of Hawaiian culture and entertainment and ODMA had its own stand following its acquisition of Eyetalk – the optometry industry reference publication. This addition also brought more staff which will be a bonus to ODMA CEO Finola Carey.

General Optical was again a major presence and the announcement that Peter Lewis, founder and CEO of General Optical is to retire in a couple of months was a major talking point around the stand. Mr. Lewis outlined the company restructure which will see General Optical and Marchon Australia become wholly owned subsidiaries of Marchon Inc. With ultimate ownership resting with VSP Inc. GenOp/Marchon will be led by newly appointed Country Manager Brad Safin and Managing Director Jonathon Lewis.
Suppliers presented new technology and products at Spotlight Sessions inside the Exhibition Hall while more detailed supplier presentations aka Master Classes were delivered in a large meeting room above the Exhibition Hall.

Equipment suppliers were all smiles from the moment the show opened due to the business boost from the government’s increases in tax write offs for small business capital purchases.

ODMA returned to Brisbane for only the second time, achieving a successful balance of exhibitor displays, education, entertainment and awards for all sectors of the independent optometry industry. In many respects the success or otherwise of ODMA is a bellwether for independent optometry, given the continued growth of corporate and franchised optometry in Australia.

Special mention should be made of some of the special guests who attended ODMA 2015. Australia is, after-all, a long way from much of the world and a relatively small market for eyewear. French designer Caroline Abram charmed delegates on the Frames Etc stand and inspired people in a packed out Spotlight Session with her philosophy on feminine eyewear. Maui Jim’s Dave Burch from America promoted the potential of sunglasses, a smiling Robert Morris from London personally launched his new collection ‘Charles Stone’ which has a uniquely New York feel, Annette Estø was thrilled to show off her striking Danish brand Fleye and Jutta Dotzier from Germany was on hand at the European Eyewear stand to talk about Eschenbach.

Closer to home outback wrangler, chopper pilot and animal expert Matt Wright flew in from Darwin to charm delegates as the brand ambassador for Serengeti.

Notwithstanding the steady supply of jugglers, magicians and musicians throughout the exhibition, the highlight of the three days had to be the Gala Dinner and Awards on Saturday evening with over 500 attendees. Headline act was Brisbane’s Red Hot Rhythm tap dance company who performed a high energy cocktail of tap dance, rhythm and theatre to accompany the excellent fare we have come to expect from the Brisbane Convention and Exhibition Centre.

There is no doubt, however, that much of the anticipation around the dinner was focused on the awards and this year they were received with the usual enthusiasm.

As in past years ODMA will survey attendees and exhibitors to guide their decisions on the next ODMA show but there is no doubt they have some challenging decisions ahead, not the least of which is location. Brisbane has been a popular destination and remains high on the list of options but the traditional Sydney home of ODMA and the opening of the new Sydney International Convention, Exhibition, and Entertainment Precinct in late 2016 along with the popular Australian Technology Park in the historic railway workshops at Eveleigh are also serious contenders according to ODMA Chairman Richard Grills.

While talking of Richard Grills, this will be his last ODMA as chairman of the Association as he plans to step aside from that role and make way for “new blood” to quote Mr. Grills. As the guiding hand behind ODMA for many years now, the industry owes a debt of gratitude to this tireless individual.

Long-time ODMA CEO Finola Carey commented, “I am delighted with the show and the feedback has been almost universally positive. Not much will change for the next show. Why change what is working?”She added “Some of our innovations have proven very successful such as our speed dating offering for potential practice buyers and sellers. We will continue to develop ideas such as these to help the industry prosper. In the future, for example, I would like to see a stronger focus on merchandising.”

Congratulations to the ODMA organising committee, presenters, exhibitors and attendees on yet another successful show.

Michael Jacobs is the former CEO of Eyecare Plus. He is a business consultant and a columnist for mivision.

Professor Brien Holden has Passed Away