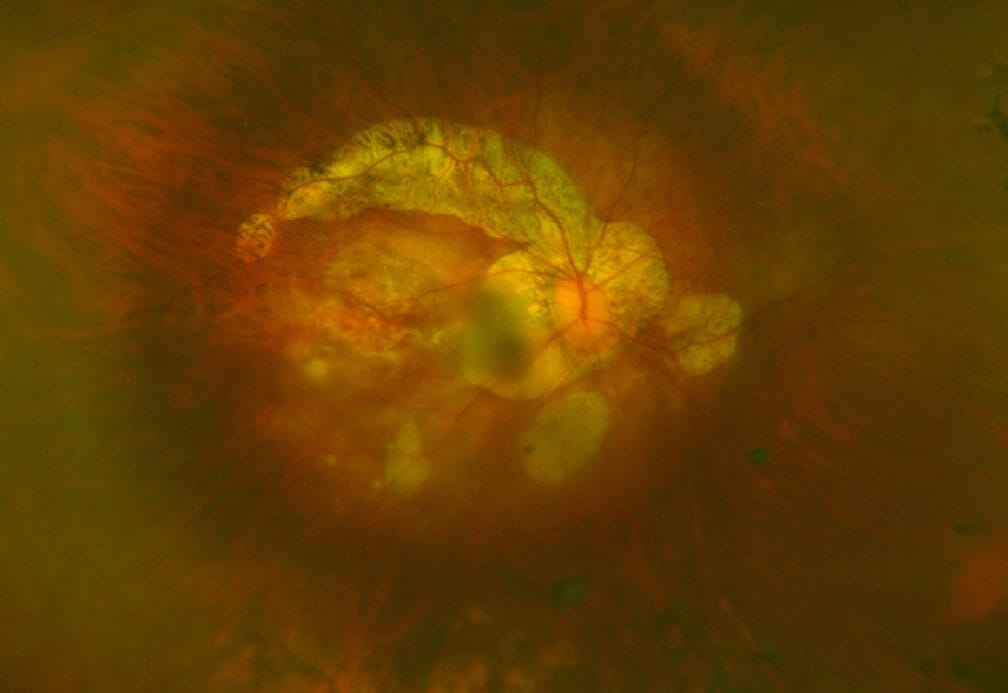 Myopic traction maculopathy, also known as myopic foveoschisis, is a schisis-like thickening of the retina in eyes with high myopia with posterior staphyloma. The pathologic features may also include lamellar or full-thickness macular holes, shallow foveal detachments and inner retinal fluid.

How common is pathological myopia?

Myopia is a common condition, affecting 20–40 per cent of adults. High myopia is defined as a refractive error of more than -6 dioptres where the axial length is usually greater than 26mm. High myopia becomes pathological when there is progressive antero-posterior elongation of the sclera, which is associated with secondary ocular changes. The prevalence of pathological myopia (PM) is 1–3 per cent in adults, and is a major cause of legal blindness in the world. PM is responsible for low vision or blindness
in 5–8 per cent of the population with low vision in Europe, and up to 27 per cent in China and Japan.1

Eyes with PM are not simply elongated but can also be deformed as they do not retain a spherical shape. Eyes with PM are more prolate in shape, with posterior protrusions (caused by scleral ectasia) referred to as posterior staphylomas as seen in Figure 1. 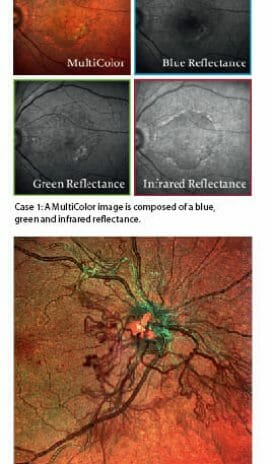 Myopic tractional maculopathy is a complication of pathological myopia and occurs in 9–20 per cent of myopic eyes with a posterior staphyloma. It is thought to develop through tractions exerted by the epiretinal membrane (ERM) or posterior vitreous cortex on the retina, which is already stretched by the staphyloma. Several studies suggest that the separation of the retinal layers in myopic foveoschisis (MF) may be due to inward traction caused by the progressive ectasia of the sclera and the relative rigidity of the inner retina and blood vessels. Retinal microfolds were seen on optical coherence tomography (OCT) in a study after vitrectomy and internal limiting membrane (ILM) peel.3 These microfolds of the retina coincided exactly with the retinal arterioles, and are thought to be a result of relatively low flexibility of the retinal arteriole during axial length elongation in highly myopic eyes. Histopathological studies on excised membranes from eyes with MF that had undergone ILM peel confirmed the presence of collagen fibres and cell debris, which led to the hypothesis that fibroblast proliferation may have a key role in the pathogenesis of MF. 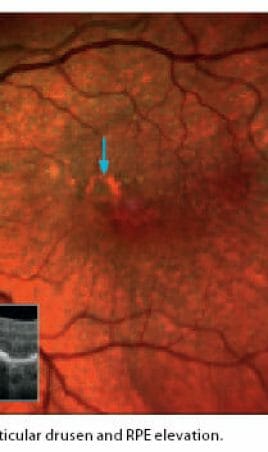 Some patients with myopic tractional maculopathy have no symptoms at all. As it progresses and becomes more severe, symptoms include visual blur and metamorphopsia. These myopes begin to report difficulty reading and making out fine details on a computer screen, or facial expressions of those around them.

It may be very difficult to detect myopic tractional maculopathy on clinical examination as the schisis is shallow. A progression to macula hole or retinal detachment would be associated with more observable clinical findings.

The diagnosis and understanding of myopic maculopathy has increased significantly with the advent of modern diagnostic tools, especially OCT, which can characterise the following changes:

OCT features of FS include thickening of the retina with splitting into a thinner outer and thicker inner layer. Vertical bridging columns are seen between the inner and outer leaves of the split retina. These retinal columns help differentiate FS from retinal detachment. The schisis cavity may develop in the different layers of the neurosensory macula including the outer plexiform, inner plexiform and nerve fibre layers.4 Figure 2 shows the retinoschisis with linear retinal columns across the two separated parts. Figure 3 shows a patient with a more complex inner and outer retinoschisis involving different layers of the retina.

In this stage there is a full-thickness defect in the neural macula associated with adjacent retinoschisis (Figure 5). Fluid passes through the defect, resulting in a retinal detachment.

The natural history of foveoschisis is variable and difficult to predict in individual patients. It remains stable in
most eyes but slowly progresses in about a quarter of patients leading to severe central visual loss in untreated cases. Gaucher et al. describe two factors predictive of poor prognosis: the presence of premacular structure (described as a hyper-reflective line that on OCT may represent a partially detached epiretinal membrane or posterior hyaloid) and the presence of foveal detachment. Poor pre-operative visual acuity also seems to correlate with poorer prognosis.5 Figure 6
shows in a myopic patient, progression of a retinoschisis over 12 months with the development of foveal detachment. 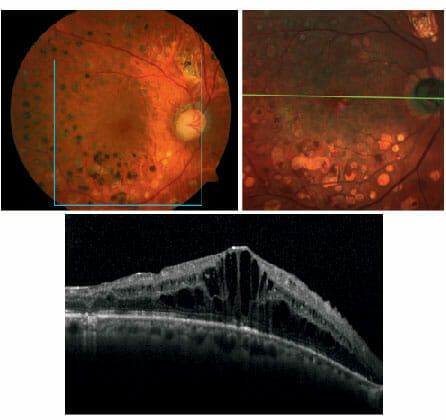 Myopic macular holes (MH) may develop spontaneously or after vitreous surgery, and can be associated with macular retinal detachment. Several factors are thought to contribute to the progression of foveoschisis to the development of myopic MH and retinal detachment, including elongation of ocular axis and retinal thinning, and weak attachment between the neurosensory retina and the RPE in posterior staphyloma.

MHRD accounts for 0.5 per cent of retinal detachments, and is predominantly prevalent in highly myopic eyes. It is believed that MHRD occurs due to antero-posterior vitreous traction due to a posterior staphyloma, tangential traction on the macula from cortical vitreous and epiretinal membranes, and reduced retinal adherence to the choroid due to RPE atrophy. Figure 7 shows a patient with macula detachment due to a macula hole.

Other investigations to assess the RPE and choroidIn myopic eyes, abnormalities of the Choroid and RPE may affect vision.

Fluorescein angiography is able to demonstrate pathology such as lacquer cracks of Bruch’s membrane and choroidal neovascularisation, which occur in myopic chorioretinal degeneration.

Autofluorescence (AF) imaging of the lipofuscin granules in the RPE cells is able to identify regions of chorioretinal atrophy at the central macula. AF reveals mottled areas of increased AF signal at the fovea. MHRD is characterised by reduced AF signal corresponding to subretinal fluid, and increased signal at the MH itself. It is sometimes difficult to detect MH in highly myopic eyes with OCT because the fixation point may shift from the fovea. AF images are helpful in these patients to confirm the presence of the MH, which has a poorer prognosis.

The MAIA (Macular Integrity Assessment Microperimeter) shown in Figure 8 uses scanning laser ophthalmoscope technology to measure and map the photoreceptor sensitivity at the macula in an objective and reproducible fashion. Figure 9 shows the improvement in macula function with the MAIA following repair of the macula schisis.

The aim of vitrectomy surgery is to reverse the macular schisis, and restore normal anatomy to improve vision and prevent further complications of MF, including MH and MHRD.

However the indications and timing of surgery are controversial. Vitrectomy was effective in restoring foveal re-attachment in up to 87.5 per cent in one study,6 but surgery does carry risks, including worsening vision due to photoreceptor disruption and retinal detachment. Studies have shown that surgery in patients with MF without foveal detachment experienced no improvement (33 per cent) or even worsening (25 per cent) of vision after surgery. Surgery in MF, therefore, seems to be indicated when there is recent decline in vision or new distortion; but before visual acuity is too poor for recovery of sight. Most of the evidence appears to indicate that surgery should be performed when MF is associated with early foveal detachment.7

Small gauge vitrectomy (Figure 10) is the most commonly performed surgical procedure, whereby vitreous is removed, relieving traction on the retina, specifically the macula. This results in the restoration of normal macular architecture and settling of the “columns” typical of MF. The injection of gas into the vitreous cavity may not be necessary in the management of myopic tractional maculopathy, but may hasten resolution of the maculopathy.

Internal limiting membrane (ILM) peeling (Figure 11), which is routinely performed in idiopathic macular hole surgery, is controversial in surgical management of MF. Some researchers suggest that ILM peeling may increase the risk of macular hole, conversely there is also evidence to the contrary. The rationale supporting peeling the ILM is to relieve tangential traction on the macula. There is published research that suggests that fovea-sparing ILM peeling can aid to relieve traction, while preventing damage to the foveal photoreceptors.

Myopic Macular Hole and Macular Hole Retinal Detachment
Vitrectomy with ILM peel and a long- or short-acting gas tamponade is commonly used to repair MH. Closure rates have been reported between 10–44 per cent, which is much lower than the success rate in the more common idiopathic variant of MH. The lower success rate in myopic MH is partly due to the thin foveolar retina stretched over a large posterior staphyloma.

Similarly, MHRD is managed with vitrectomy, gas endotamponade and face-down positioning. ILM peeling may be carried out to ascertain removal of all overlying residual vitreous cortex and epiretinal membranes, and to increase the flexibility of the inner retina. In a minority of cases, the edge of the macular hole may need to be treated with laser photocoagulation to encourage re-attachment of macular retina to the RPE. However, this results in a poorer visual outcome due to direct damage to
macular photoreceptors.

Although vitrectomy surgery helps release traction, it does not address the major risk factor for myopic tractional maculopathy, which is the posterior staphyloma. Scleral buckling of the macula has been successful in treating the maculopathy by reducing the traction secondary to the staphyloma and the rigidity of the inner retina and supporting the posterior staphyloma. An L-shaped buckle has been recently developed to avoid the need for posterior suturing and aims to flatten (rather than invert) the shape of the staphyloma.8

The possible value of stopping axial elongation in PM using macular buckling has been reported but the prophylactic value in preventing progression to macular hole and foveal detachment has not been fully investigated. Macular buckling combined with vitrectomy is thought to increase the success rates of surgical closure of myopic MH and encourage retinal re-attachment in MHRD.

Other causes for loss of central vision in myopes
Lacquer cracks

Lacquer cracks are mechanical breaks in Bruch membrane/retinal pigment epithelium (RPE) /choriocapillaris complex due to excessive axial elongation. It is postulated that stretching of these tissues owing to progressive globe elongation underlies the development of lacquer cracks. However, little is known about the pathogenesis. A retrospective observational case series suggested that lacquer cracks occur in the position of perforating scleral vessels.9 They represent a risk factor for choroidal neovascularisation (CNV) and have a guarded visual prognosis.

Myopic Choroidal Neovascularization (CNV) and Forster-Fuchs’ spot
Myopic CNV is a common vision-threatening complication of myopia and pathological myopia. It develops in 5–11 per cent of patients with PM.1 CNV is increasingly common in eyes with lacquer cracks, chorioretinal atrophy and thinning of the choroid, and when there is CNV in the fellow eye. Several theories have been proposed for the development of myopic CNV. The mechanical theory is based on the progressive elongation of the antero-posterior axis of the globe, which causes a mechanical stress on the retina, leading to lacquer cracks and CNV.