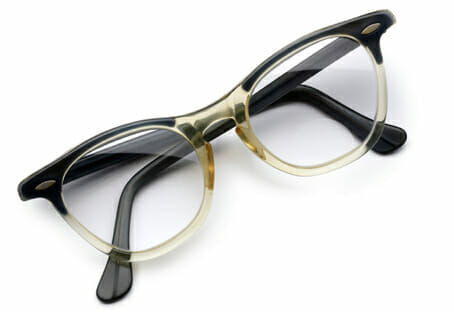 Having succumbed to presbyopia, Alan Saks bemoans the challenges of growing (just a little bit) older.

I’ve been at this optometric game for going on 40 years, since I started optometry school. I have, however, been familiar with things optometric for as long as I can remember. As a child I spent many a weekend at my family’s practice. My Dad would often go to the office on weekends. We’d install contact lens modification units that he’d fabricated in our home workshop using bearings, shafts, belts and motors. We’d also build partitions for contact lens instruction areas and install various bits of equipment. When I was a bit older he’d get me to help with moulding haptic lenses. He taught me how to polish and repower demo hard lenses as well as verify and measure them.

I’ve always been fascinated by the many and varied aspects of our amazing profession and I used to love pottering around the office.

Of course there are many who reject or decline monovision. For them multifocal contact lenses are an option, if not the perfect solution.

By definition, having practised optometry for 35 years, I’m now well and truly presbyopic.

Of course presbyopia has always been part of my practice and finding solutions to this frustrating condition a big part of it.

I’ve managed to delay the worst of the frustrations as my forme fruste cones allowed for subtle ‘bifocal’ cones that aided my near vision, beyond the age where most people start to battle. Now well into my 50s my waning residual accommodation, forme fruste cones and small pupils can no longer pass muster. Like so many presbyopes I’m now searching for reading glasses at every turn. I have to admit; it is, at times, frustrating. I have heaps of glasses under the house, in the garage, next to the bed, at the TV, in the car and in the kitchen. I also have to admit to numerous pairs of el-cheapo, ready-made reading glasses.

At work and on my computer I use my high tech Prevencia coated Nikon Web1 occupationals in my superb Lindberg n.o.w frame. They’re great lenses and I’m largely unaware of any distortion or issues, with a wide field of view and an excellent range of vision.

We prescribe a lot of occupational lenses and have very satisfied patients.

Like some presbyopes – you know the ones I mean – I’m intolerant of progressive lenses. With my fortunately relatively normal distance vision, I simply look over the top of my occupationals. My colleagues are unimpressed but I’m all about functionality, posture and clarity. I’m sure I’ll never wear contact lenses, as I’m also atopic and allergic. I encourage all my patients to take a simple spectacle approach but there are many, like my wife, who will not be seen dead in spectacles. For them contact lenses are the only real option, until such time as they develop visually significant cataracts and can consider monovision or multifocal IOLs. Some opt for monovision LASIK and there are some who do the rare and occasional monovision or multifocal Ortho-K. Although I have many presbyopic contact lens patients, CLs are not for everyone.

In general, over the past 30-odd years I’ve found monovision patients to be among the most successful and happy patients, often from their early 40s until well into their 80s.

When cataracts limit monovision success, we wean them off their contact lenses and then replicate their monovision with IOLs. They often do even better, with more precise optics, closer to the nodal point of the eye. Enhanced vision quality and depth of field with modern IOLs allows for greater flexibility with distance, near and intermediate vision.

Of course there are many who reject or decline monovision. For them multifocal contact lenses are an option, if not the perfect solution.

Multifocal CLs and IOLs have significant and largely insurmountable optical limitations. Until we have true accommodating IOLs we are stuck with these compromises, to some degree or another. Parel and Koopmans in the USA, in collaboration with Arthur Ho and the BHVI in Sydney, among others, have demonstrated and explained ‘phaco-ersatz’ techniques: the capsular bag is emptied and refilled with an optical accommodating gel which allows the ciliary sphincter to do its job. Normal accommodative function is magically restored.

The BHVI are also developing and promoting extended depth of focus (EDOF) lenses as another presbyopic solution. To me EDOF is just another way of creating a depth of focus – with the inherent optical compromises – but EDOF may offer us better results than the traditional multifocal CLs we use today. A recent preliminary study by Daniel Tilia and colleagues at the BHVI, titled Short-Term Visual Performance of Novel Extended Depth-of-Focus Contact Lenses, showed that in fact EDOF soft lenses do perform better across most comparisons when compared to a commercially available centre-near multifocal soft lens.

Literally billions of dollars have been spent trying to solve the age-old problems of presbyopia.

I suspect that the main reason that retirement age was traditionally age 55–60 was that before spectacle use was widespread, an emmetropic person would become useless at office work or near point tasks by this age. Of course the swing to myopia and widespread spectacle and CL use has seen the traditional retirement age increase. Today people can remain active tax payers until well into their 80s. My Dad is a good example. At 85 he’s still practising optometry part time. A myopic-astigmatic spectacle wearer from a young age, he wore bifocals in his 40s. At the start of commercial progressive lenses he was one of the early Varilux lens wearers. When cataracts became evident he opted to have his IOLs under-corrected – leaving him around -1.50 D myopic – as he didn’t want to lose his ability to see at near, unaided. Today he still wears progressive spectacles for most things but at times removes them for near tasks.

So as we can see, presbyopia remains one of the major challenges we face in practice. It’s a major area of research in academia and also at a corporate level. People are delving into the many aspects of presbyopia.

The January 2016 edition of the respected journal Ophthalmic and Physiological Optics features ‘Presbyopia: Physiology, prevention and pathways to correction’. I was amazed at some of the detailed microscopic images and how deeply they are investigating accommodation, ciliary body and lens function, to try to find ways to prevent or correct the development of this age-old condition.

For those with a deeper interest in this field take a look at the aforementioned EDOF paper, as well as the OPO journal via the hyperlinks in the online edition of ‘mizone’.

For now however even our ‘successful’ multifocal CL patients will still come in for their annual checks and say “I’d like just a little more clarity at near” while others will say “Please can you make my night driving and TV subtitles just a little clearer”. Of course whenever you fix one, you tend to compromise the other…

Our progressive spectacle wearers also ask, “can you make my computer visual area wider?” while others ask if we could “please get rid of the ‘swimming’ effect, it makes me seasick”. Some mention the need for physiotherapy – for hyperextension related neck-pain, from the chin up posture that some progressive spectacle lens designs impose. This may arise from poor prescribing, substandard dispensing and/or inappropriate lens design.

Presbyopia management thus remains a less than exact science and may frustrate patient and practitioner alike.

It takes some additional art and psychology to keep patients healthy and happy.