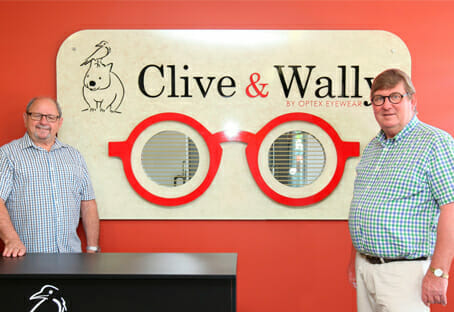 The Dubbo-based company was purchased from its founder in late 2015 by business entrepreneurs John Hansen and Gino Trigatti, and re-branded Clive & Wally.

Its house brand, which was formerly restricted to optical has been expanded with the soon to be released addition of an acetate sunglass collection, new colours are regularly being released, and frame quality has been enhanced with stronger componentry. Clive & Wally also produces frames for independent Australian designed brands.

Mr. Hansen said the investment had been significant but there was “huge potential” for the business given that it was now positioned to produce high quality eyewear that could compete on price with Chinese and Indian manufacturers.

“There is a trend in Europe for manufacturing to go back to country of origin – so the Italians and French, for instance, are building manufacturing plants again – and they are shipping out plant equipment to emerging international manufacturers as well.”

According to Mr. Trigatti, more partnerships with existing eyewear brands are under negotiation. “We’re currently talking to other Australian eyewear designers who until now, have their product made overseas. Now they know we’ve invested in new equipment and increased our production capability they are seriously considering coming back to have their eyewear made in Australia.”

Mr. Trigatti said his team also works with new designers to develop and hone prototypes ahead of production. “We often have fashion designers come to us with the idea of adding to their business by designing frames. We sit down with them to refine their concepts then make the prototype and help them refine it again before taking it to production,” he said. “It’s a very collaborative process.”

Mr. Trigatti, who moved from Brisbane to Dubbo to take on the role of Managing Director, said Clive & Wally would remain in Dubbo. “We considered the possibility of moving the plant back to Brisbane but Optex has been established in Dubbo since 1973 and we’ve got a great team of experienced people that we want to look after.”

Mr. Hansen said, “The business has been built in the bush and that’s where we want to keep it. As an Australian owned and based company employing Australians and manufacturing products locally, we’re offering independent optometrists a great opportunity to differentiate themselves by supplying Australian quality eyewear that’s warrantied for two years, fully supported and affordable.”