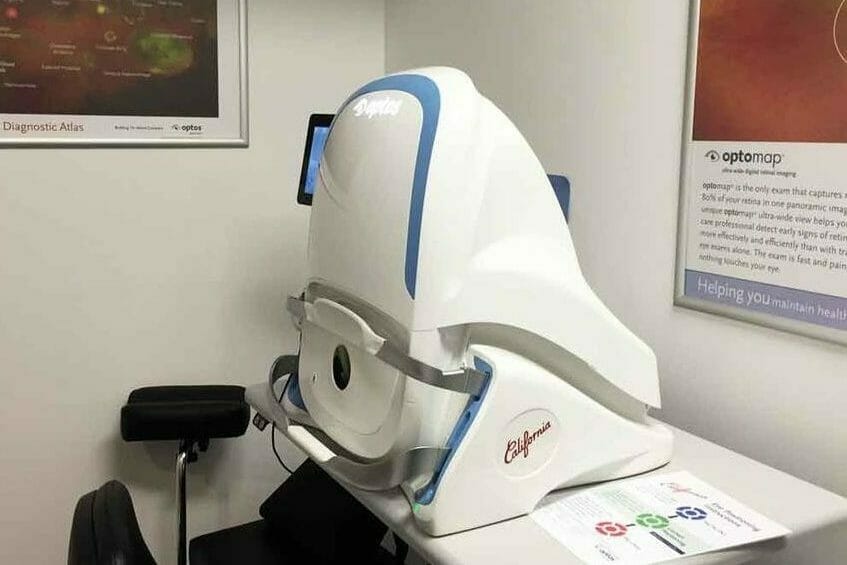 Ultra-widefield imaging represents a significant development in the detection, evaluation, and documentation of posterior segment eye disease. It enables the acquisition of up to 200 degree panoramic images of the retina in various modalities, including pseudocolour, fundus autofluorescence (FAF) and fundus fluorescein angiography (FFA).

More recently, ultra-widefield indocyanine green (ICG) angiography has been added to enhance the range of capabilities, allowing for the assessment of the deeper choroidal vasculature. Ultra-widefield imaging technology can be used with or without pupil dilation, and is likely to be of benefit to all clinicians involved in the assessment and treatment of posterior segment eye disease.

The use of non-mydriatic, digital fundus photography is becoming more common

The Optos imaging system (Optos PLC, Dunfermline Scotland) uses scanning laser technology in combination with a large ellipsoid mirror to allow peripheral retinal imaging without the need for a contact lens or pupillary dilation. It enables visualisation of up to 200 degrees, representing approximately 82 per cent of the retinal surface.1 A single image usually takes less than 0.4 seconds exposure to acquire.1 The system was originally equipped with a 532nm green laser and a 633nm red laser. The green (red free) component best depicts the retina and its vasculature, while the red laser is used to image deeper choroidal structures.2 A composite pseudocolour image is obtained by combining these two images.

A significant breakthrough in ultra-widefield imaging occurred with the addition of a 488nm blue laser, to enable fluorescein angiography. This provides the ability to obtain high-resolution angiographic images in a single capture, providing unprecedented information regarding the peripheral retinal perfusion and vasculature. More recently a 805nm laser has also been added, which allows indocyanine green (ICG) angiography to be performed to assess the choroidal circulation, even in the retinal periphery. This is likely to further increase our understanding of the pathogenesis of many retinal and inflammatory eye diseases.

The use of non-mydriatic, digital fundus photography is becoming more common, and can be a valuable tool in patient screening, disease detection, clinical documentation, and patient education. A 2012 study compared the use of non-mydriatic ultra-widefield photography with dilated, stereoscopic Early Treatment of Diabetic Retinopathy Study 7 standard field 35mm colour 30 degree fundus photos (ETDRS photography). It found that for the assessment of diabetic retinopathy and diabetic macular oedema, the Optos imaging system results compared favourably to ETDRS photography and clinical examination, and could be acquired much more rapidly.3

A real-life example of the utility of the Optos imaging system is demonstrated in the following example of a 53-year-old lady who presented to Cambridge University Hospital during our fellowship with retinal vasculitis. Figures 1a and 1b (next page) show the images initially obtained with standard digital fundus photography, using the Topcon TRC-50DX camera system (Topcon Medical Systems, Oakland NJ). Fundus imaging was then obtained with the Optos imaging system, which was able to more fully document the extent of the disease process, seen in Figure 2.

Ultra-widefield imaging is useful in patient education, as it is able to provide immediate feedback to patients and their relatives. Figure 3 shows imaging obtained from a patient with poorly controlled type II diabetes. It was used to show the patient the areas of vitreous haemorrhage, tractional retinal detachment and previous laser photocoagulation burns. This helped provide the patient with sufficient understanding of his condition to motivate him to institute major lifestyle changes in relation to his diabetes.

The importance of the retinal periphery in eye disease is still being developed and understood. A 2015 study using ultra-widefield imaging showed that there is a range of age-related macular degeneration AMD-like pathological changes, some even in those without sight-threatening macular disease.5

The ability to obtain high-resolution ultra-widefield images of the peripheral retinal circulation perfusion greatly enhances our ability to understand and treat a variety of posterior segment disorders. Figure 4 is an FFA image from a 33-year-old patient who presented with a combined branch retinal artery and vein occlusion secondary to antiphospholipid syndrome. The angiogram image demonstrates retinal ischaemia (dark area) involving the macula and extending towards the temporal periphery. This provided key information in deciding treatment options and likely prognosis.

Ultra-widefield fluorescein angiography is invaluable in assessing the peripheral retinal perfusion of patients with severe diabetic retinopathy. Figure 5a is an ultra-widefield image of a patient with type II diabetes, showing previous retinal laser burns and possible retinal neovascularisation. The ultra-widefield FFA in Figure 5b confirms multiple areas of retinal neovascularisation (hyperfluorescent, white areas) and guides the need for further treatment to reduce the risk of severe vision loss. A study of non-infectious posterior uveitis from the Johns Hopkins University reported that ultra-widefield angiography altered patient management in 48 per cent of cases, compared to only 16 per cent where limited angiography alone was available (p<0.001).6

The addition of indocyanine green (ICG) angiography to the Optos ultra-widefield system is an exciting development, allowing unprecedented imaging of the peripheral choroidal vasculature. This is useful in the assessment and diagnosis of conditions such as central serous chorioretinopathy (CSR), idiopathic polypoidal choroidal vasculopathy and inflammatory eye disease. Figure 6 demonstrates an essentially normal ultra-widefield ICG angiography image. With continued use and research, our understanding of the importance of the peripheral choroidal circulation in these conditions is likely to improve.

The importance of clear and precise documentation in medicolegal cases cannot be overemphasised. The ongoing case from the United Kingdom of a locum optometrist Ms. Honey Rose being charged with negligent manslaughter represents the first time (to our knowledge) a clinician has faced criminal charges for a missed diagnosis. This was due to her reported failure to diagnose papilloedema in an 8-year-old boy.

Optometry Times editorial advisory board member Justin Bazan is quoted as writing: “She [Ms. Rose] is being accused of failing to diagnose papilledema and provide appropriate care and referral. I can’t help but think that if she had an Optos on him, she would be in way better shape.” Mr. Bazan suggests that by having this documentation, the optometrist could prove there was no papilloedema at the time of her examination. He continues to write “Or on the flipside of that, if there was, she probably wouldn’t have missed it”.7 While all imaging systems would have captured the optic disc and macula, ultra-widefield imaging has the advantage of also capturing more peripheral pathology.

Ultra-widefield imaging systems such as the Optos provide an unprecedented ability to visualise the peripheral retina using a variety of imaging and angiographic modalities. This equipment is likely to benefit all clinicians involved in the assessment and treatment of posterior eye disease.

Dr Neil Sharma is an ophthalmologist with special interests in cataract surgery, macular degeneration and diabetic retinopathy. He is a Principal Ophthalmologist at Eye and Retina Specialists in Green Square, Sydney. Dr Sharma is a staff-specialist ophthalmologist at Westmead Hospital, a Clinical Senior Lecturer at the University of Sydney, and a Clinical Senior Lecturer at the University of Wollongong. He graduated with a Master of Public Health from UNSW and a Master of Medicine (Refractive Surgery) at the University of Sydney. Neil has been awarded several prestigious prizes, including the Royal Australian and New Zealand College of Ophthalmologists (RANZCO) undergraduate Prize and Medal, a 2013 RANZCO Eye Foundation Medical Retina scholarship, and the Royal Prince Alfred Hospital Patron’s Prize.

Dr Ju-Lee Ooi is an ophthalmologist with special interests in cataract surgery, macular degeneration, diabetic retinopathy and general ophthalmology. She is a Principal Ophthalmologist at Eye and Retina Specialists in Green Square, Sydney. Dr Ooi was awarded the Prince of Wales Hospital ‘Major Contributor to Ophthalmology Research’ Prize,and several research grants including the Sydney Children’s Hospital Foundation Grant, the Rebecca L Cooper Medical Research Foundation Grant and the Foundation for Children Grant. Dr Ooi has graduated from UNSW with a Master of Public Health and a Graduate Diploma in Paediatrics. Dr Ooi is a Conjoint Lecturer at University of NSW and a Clinical Lecturer
at the University of Sydney.