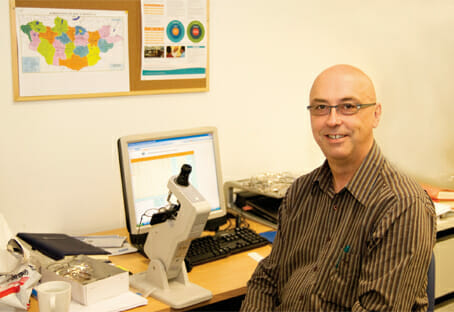 Dr. David Alan Wilson, one of Australia’s leading educators in optical dispensing, who took his expertise to many countries, passed away in Sydney late last week.

Most recently, Dr. Wilson was Senior Research Fellow at Brien Holden Vision Institute, where he authored several significant papers. Prior to this he ran the optical dispensing course for the Open Training and Education Network (OTEN) for over 20 years, where he received a quality teaching award by the NSW Government’s Education Minister. Dr. Wilson co-wrote two textbooks in optical dispensing, Practical Optical Dispensing, now in its third edition, and Practical Optical Workshop, now in its second edition.

He took his teaching skills to more than 20 countries through his work as an educator at Brien Holden Vision Institute, where he also authored a 32-week ophthalmic lenses curriculum with lectures and educational modules on progressive lenses and ophthalmic lenses.

In 2011, Dr Wilson was awarded his PhD on The efficacious correction of refractive error in developing countries.

David Wilson was a man of amazing knowledge and humanity. His generosity and sense of humour was known by all who had the good fortune to work with him

“David Wilson was a man of amazing knowledge and humanity. His generosity and sense of humour was known by all who had the good fortune to work with him,” said Amanda Davis, Chief Operating Officer at Brien Holden Vision Institute.

“Not only was Dave a consummate and dedicated educator, but through his more recent research work he had an important impact. His analysis on recycled spectacles confirmed that it was far more cost-effective to provide ready-made glasses in developing communities than second-hand spectacles.”

He was also a co-author on a recent paper predicting that myopia will affect 50 per cent of the world’s population by 2050. Commenting on this work, the late Professor Brien Holden said, “No one has more information about the global threat from myopia than Dave – full stop! His work will be imperative to counter this global epidemic.”

Dr. Wilson’s expertise saw him in the role of president of the International Opticians Association and a member of the Australian Standards committees for spectacles and safety spectacles and an assessor for the National Association of Testing Authorities. He was also a Visiting Fellow at the University of New South Wales and Honorary Research Fellow at the University of KwaZulu-Natal, Durban, South Africa.

David Alan Wilson is survived by his wife Jan and son Andrew.