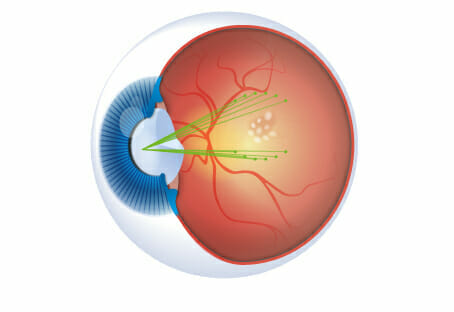 For the first 30 years of an individual’s life, the exchange of waste and nutrients across Bruch’s membrane occurs very efficiently. However, as the eye ages, the permeability of Bruch’s membrane is reduced, inhibiting its ability to remove and exchange fluid and waste deposits. Current data suggests that by age 40, the flow is reduced to approximately 50 per cent of what it is in childhood. By age 80, it is reduced to a small fraction.2 Age-related deterioration of Bruch’s membrane is an important phenomenon as it is a high risk factor implicated in the onset and progression of early age-related macular degeneration (AMD).3

The Pathology of Bruch’s Membrane Aging

if we can slow down the basal rate of Bruch’s membrane aging and restore function to what it was when the patient was in their teens, we should be able to significantly delay
AMD onset

An increased accumulation of ECM material as Bruch’s membrane ages is indicative of a problem with the degradation pathway. The degradation pathway for ECM turnover comprises the family of matrix metalloproteinases (MMPs) together with their inhibitors, i.e., tissue inhibitors of metalloproteinases (TIMPs). There are several MMPs; however, MMP-2 and MMP-9 appear to degrade both ECM components and non-ECM molecules allowing matrix turnover. Most MMPs are secreted by the RPE as latent zymogens, some are processed intracellularly, and a few are processed at the cell membrane into fully active enzymes. Studies undertaken in Bruch’s membrane-choroid preparations by my colleagues and I showed that the level of inactive proenzymes increased with age; there were also a low or undetectable level of active forms of MMPs.4 Further findings revealed that advanced ageing in AMD was also associated with significantly reduced levels of active MMP-2 and MMP-95 and sequestration of the latent forms with existing debris, thereby exacerbating the problem. Research by Kamei and Hollyfield also found that during normal aging, TIMP-3 content in Bruch’s membrane of the macula increases significantly;6 an increase in TIMP along with a decrease in active forms of MMPs likely explains the reduced degradation of ECM deposits in aged eyes. These observations suggest that increasing the level of activated MMPs within Bruch’s membrane may help to improve transport of metabolites and catabolites and slow the development of (or even potentially reverse) this risk factor for AMD.

The Effects of Laser Intervention

In 2012, my team and I published findings from a study showing that treatment with a specific laser, known as 2RT (Ellex Medical Lasers Ltd, Adelaide, Australia), activates the RPE leading to the release of activated MMPs.

The 2RT laser is a specially designed Q-switched, frequency-doubled, green Nd:YAG with a wavelength of 532 nm designed, specifically for the purposes of safe and effective retinal rejuvenation. One of the key differences between 2RT and other pulse-generating lasers is that instead of using millisecond or microsecond treatment times and thermal damage processors, 2RT utilises extremely fast nanosecond pulse resulting in a non-thermal disruptive damage mechanism. The device has a pulse duration of three nanoseconds with an energy of approximately 200 μJ per pulse. It also features a large 400 micron spot size, instead of the traditional top-hat or Gaussian-shaped laser beam and 50 micron spot size commonly used for retinal laser treatments. This larger spot size prevents Bruch’s membrane from “popping” and haemorrhaging; however, using a 400 micron spot could potentially destroy the photoreceptors as a result of killing off a large area of RPE cells, resulting in an inability to supply metabolites. Consequently, 2RT features a speckled beam profile which exclusively targets selected, individual cells within the RPE, such that only 10-20 per cent of cells within the spot are randomly raised above damage threshold and subsequently degenerate. All of the laser energy is designed to stay within the targeted RPE cells and does not extend to neighbouring cells, thus avoiding damage to the overlying photoreceptors and underlying Bruch’s and choroidal structures (and thereby reducing the risk of secondary choroidal neovascularisation). In contrast, a conventional laser will damage photoreceptor cells which would clearly defeat the object of laser treatment.

The approach taken with micro-pulse laser systems is to use a pulse frequency of 100 to 300 microseconds followed by an off interval of 1,700 to 1,900 microseconds.11 Initial studies with this approach have demonstrated efficacy similar to argon lasers, with reduced thermal damage compared to conventional photocoagulation. However, micro-pulse still produces similar laser/tissue reactions as conventional photocoagulation, due to the thermal spread of energy outside of the target site.

In our study, we irradiated human RPE-Bruch’s choroid explants with an early model 2RT using a 400 µm spot size with a discontinuous energy distribution and a total irradiation of 240 mJ/cm2. The RPE-Bruch’s choroid explants were then returned to the incubator for 14 days. Subsequently, RPE cellular dynamics were assessed using confocal laser scanning, conventional microscopy, cell viability, and proliferation assays. MMPs were quantified by gelatine zymography and densitometry.

Findings showed that within four hours of laser intervention, 47 per cent ± 8 per cent of the RPE cells within the treatment zone displayed clear signs of injury. By post-treatment days 10 to 14, most of the injured beds were repopulated by migrating RPE cells from regions surrounding the lesion. The results also showed profound changes in activated MMP-2 and MMP-9 with levels increasing by 6.7 ± 2.6-fold and 4.4 ± 1.1-fold, respectively, above controls at day seven post laser.7

Our findings suggest that the nanosecond laser pulse modality provides an avenue for transiently increasing the RPE-mediated release of active MMP enzymes. Although the likely impact of this enzymatic release on the structural and functional aspects of aging Bruch’s membrane requires further assessment, early clinical findings indicate that laser treatment may delay pathological and molecular changes in AMD.7

In a 12-month prospective, non-randomised, pilot intervention study, conducted at the Centre for Eye Research Australia by Professor Robyn Guymer, 50 patients with bilateral intermediate AMD (drusen > 125µm) were treated with a single application of 2RT to assess the ability of the laser to delay the progression of early AMD. Findings showed that a single application of the 2RT laser produced bilateral improvements in macular function (as measured by flicker perimetry) and appearance.

In a follow-up to the 12-month pilot study, 24-month clinical data showed that no patient had progressed to the advanced ‘wet’ form of AMD. Further, no patients had developed choroidal neovascularization.8,9

A multi-center, randomised trial known as LEAD (Laser Intervention in Early Age-Related Macular Degeneration) is currently underway to investigate the safety and efficacy of 2RT nanosecond microsurgical laser intervention in early AMD10. The trial, which began in 2012, includes 292 patients with bilateral high-risk intermediate AMD (drusen >125um). Patients in the treatment group will undergo the 2RT procedure in one eye, with treatment to be repeated at six-monthly intervals. Patients in the control group will undergo a sham procedure. The primary endpoint is progression to advanced AMD in the treated eye, as assessed by ocular examination, colour fundus photography, ocular coherence tomography and fluorescein angiography at 36 months post initial intervention. The secondary endpoint is progression to advanced AMD in the non-treated eye.

Of course one of the main challenges associated with studying the effects of 2RT in AMD is that treatment is prophylactic. If you treat a patient with reasonably good vision in a trial, it is difficult to determine if the laser has achieved anything. Consequently, we need to use more sophisticated tests, such as focal flash recovery times, whereby you flash the patient before treatment and measure photoreceptor recovery time and then repeat three months after treatment. If there is a faster flash recovery time after treatment, it suggests that transport processes have improved;11,12 however, we don’t have this information yet. Using a test known as fundus reflectometry which measures the visual pigment before and after treatment would also be useful, but again, we don’t yet have this data.

Overall, treatment with 2RT should help to improve early-stage AMD by cleaning up the debris in Bruch’s membrane. However, the ultimate goal of 2RT is to prevent the progression of AMD to its late stages. Since the transport processes are significantly depleted in most people by age 40, it is important to intervene sooner rather than later. There is of course a genetic component to the development of AMD, but if we can slow down the basal rate of Bruch’s membrane aging and restore function to what it was when the patient was in their teens, we should be able to significantly delay AMD onset