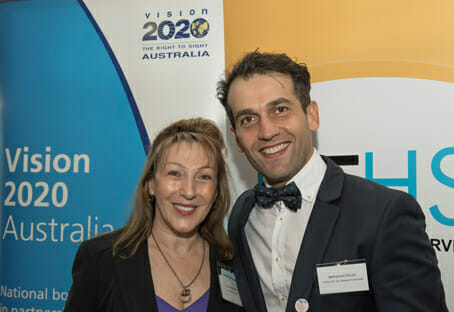 Blindness and vision impairment appear to be on the decline in Australia according to the findings of the first ever National Eye Health Survey (NEHS) released on World Sight Day, 13 October 2016.

The survey of 4,836 individuals from metropolitan, regional and remote communities identified that Australia is performing better than other comparable countries.

The survey showed the importance of regular eye examinations and access to services, highlighting that:
• The proportion of Australians with vision impairment is higher in outer regional and very remote areas when compared to other areas
• More than 50 per cent of participants found to have an eye condition didn’t know they had that condition prior to taking part in the NEHS, and one third of all participants were referred to an eye health professional
• Almost 40 per cent of Indigenous Australians and 13 per cent of non-Indigenous Australians who need cataract surgery have not accessed specialist treatment services
• Half of Indigenous participants and a quarter of non-Indigenous participants with diabetes are not having an eye examination at the frequency recommended by the National Health and Medical Research Council.

The report underlined the importance of regular eye tests: more than 50 per cent of the 4,836 participants found to have an eye condition were unaware they had that condition prior to taking part in the survey, although in the case of AMD, only 17 per cent of people did not know that AMD was the cause of their condition. Over 30 per cent of all participants were onward referred to an eye health professional.

“Importantly, the National Eye Health Survey draws a line in the sand, providing the first truly national picture of eye health in Australia. Its findings will assist in the shaping of eye health policy, delivery of services and will provide a benchmark for monitoring progress towards reaching the World Health Organization’s target of a 25 per cent reduction in the prevalence of avoidable blindness and vision impairment by 2019,” said Ms. Northam.

A Start Point for the Future

Principal Investigator, Dr. Mohamed Dirani from the Centre for Eye Research Australia, said, “Australia is leading the way in producing invaluable data on the prevalence and major causes of vision impairment and blindness, with the National Eye Health Survey giving us an up-to-date evidence based picture of the nation’s eye health for the first time.

“The survey findings will assist in targeting Australia’s eye health and vision care resources more effectively, and provides a start point for more effective evaluation of the impact of eye health interventions across the nation.”

The participants who enrolled in the National Eye Health Survey completed a simplified eye examination and a standardised general questionnaire. Recruitment and data collection was conducted across approximately 30 testing sites in Australia in urban, regional and remotes areas. The survey concluded at the end of April 2016.