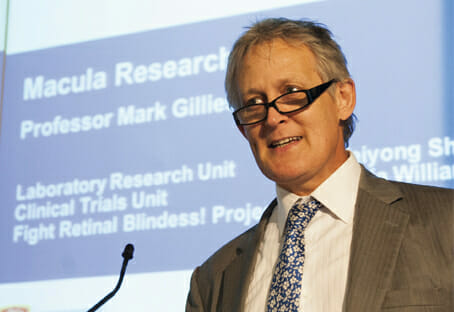 Ozurdex (dexamethasone 700mcg), a new, sustained-release eye implant, has been listed on the Pharmaceutical Benefits Scheme (PBS). The treatment is indicated for patients with visual impairment due to diabetic macular oedema (DME) who have had cataract surgery (pseudophakic), are scheduled to have cataract surgery and have a contraindication, have failed to respond to, or are otherwise unsuitable for, treatment with a vascular endothelial growth factor inhibitor (anti-VEGF).1

Professor Mark Gillies, ophthalmologist at the Save Sight Institute, University of Sydney (a teaching and research centre of the University), welcomed the new treatment option for Australians with DME. “Sight impairment has a significant impact on quality of life and independence and represents an additional burden to those also living with the daily challenge of diabetes. This novel, biodegradable eye implant now provides us with an important new option for DME.”2,3

Ozurdex is injected into the vitreous by an ophthalmologist, using a specifically designed single-use applicator.4 The implant is designed to provide sustained delivery, slowly releasing a potent corticosteroid (dexamethasone) directly into the vitreous, potentially resulting in less frequent injections.2,3

“Patients with DME often have other health issues they need to manage, which can result in the need for frequent appointments and visits to a wide range of healthcare professionals,” said Professor Gillies.5,6

“Anything we can do to reduce the burden of this intensive interaction with healthcare professionals cannot be underestimated.”

An in vitro study has shown that treatment with Ozurdex can inhibit not only VEGF but also a range of other inflammatory mechanisms implicated in the development of DME.7 In clinical trials, Ozurdex delivered a rapid and significant vision improvement of 15 or more letters compared with sham treatment in DME patients, as early as 21 days after study treatment (P≤0.003).2

Ozurdex also provided sustained, long-term improvements in vision in DME patients with a mean of four injections over three years, compared with sham treatment (22.2 per cent patients had a ≥15-letter improvement from baseline with Ozurdex 700mcg versus 12.0 per cent with sham; P≤0.018).2

“As the first corticosteroid to be listed on the PBS for treatment of DME, Ozurdex provides a viable alternative for ophthalmologists to use when first-line treatments are either ineffective or not appropriate. We need access to every opportunity and approach to protect the sight of Australians living with diabetes and DME,” concluded Professor Gillies.

The efficacy and tolerability profile of Ozurdex for the management of patients with DME is supported by two 3-year, multicentre, double-masked, randomised, sham-controlled phase III studies involving over 1,000 patients as part of the MEAD (Macular Edema: Assessment of Implantable Dexamethasone
in Diabetes) clinical trials program.2

Diabetes macular oedema is the single leading cause of vision loss for people with diabetes but can be prevented through early diagnosis and treatment.9 An estimated 72,000 Australians suffer from the condition with an additional 30,000 Australians expected to develop DME by 2030.8