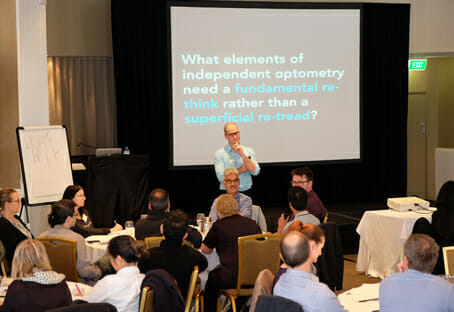 To win the battle for relevance, optometrists must “recalibrate, reengineer, reframe, re-imagine and re-position,” according to social researcher Michael McQueen.

Mr. McQueen was speaking to 120 ProVision optometrists and practice staff at a workshop in Melbourne during November, the continuation of ProVision’s national education program.

Drawing on research looking at over 500 of the world’s most iconic brands, Mr. McQueen outlined a game plan for independent optometrists to stay ahead of the curve by continuing to re-invent before being forced to do so.

Mr. McQueen spoke about the different phases of relevance a business will follow, helping ProVision optometrists to understand their own ‘relevance pulse’ and at which point in the curve to innovate. This, he said, can be counter-intuitive as the ideal time to innovate is when a business’ financial indicators are strong, causing some companies to fall victim to the ‘intoxication of success’. Mr. McQueen cited Kodak, Blockbuster, Borders and Saab as good examples – their failures to remain relevant through reinvention at critical stages eventually led to their demise.

During a workshop described by optometrist Greg Sly as “information that no business could afford to miss,” Mr. McQueen explained the four major shifts causing brands and industries to become irrelevant; technological disruption, marketplace disruption, demographic disruption and regulatory disruption. He said all are relevant to the Australian optometry market, now and in the future. The emergence of online diagnostic tools, eye drops for presbyopia, 3D printing, new optometry players, the changing demands of younger generations, as well as the future of Medicare were just some of the disruptive forces identified during the education session.

Mr. McQueen pointed out that “resisting change is like holding your breath; even if you’re successful, it doesn’t end well”. He said by embracing the five R’s; recalibrate, reengineer, reframe, re-imagine and re-position, practices can successfully navigate change and emerge stronger than ever.

Recalibrate: make sure any changes align with your DNA and identify the areas of the business that need a fundamental re-think rather than a superficial re-tread.

Reengineer: deconstruct processes carried out daily to remove non value-adding elements that often cause frustration for the end-consumer.

Reframe: cultivate an innovation mindset by adopting a posture of curiosity, embrace diversity in the business and de-stigmatise risk and failure.

Re-imagine: Look into the future and develop new goals that are just out of reach, identify the road blocks and the changes required to overcome them.

Re-position: Identify gaps in the business and predict future customer needs to stay ahead of the curve through new products, markets and messaging.

The audience of ProVision optometrists, many attending with their key practice staff, were asked to identify innovative ideas they could seek to implement in the future. Summarising the workshop, optometrist, Lisa Bakker, from Eyes@Narangba, said, “Michael challenged my thinking and created a way to plan forward and implement changes”.