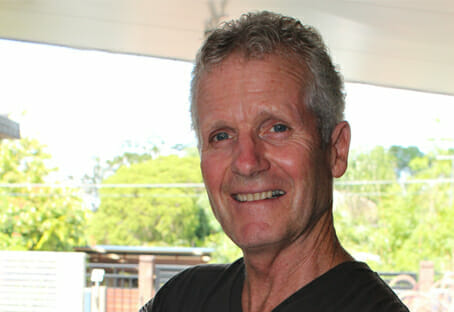 Mr. Heggie worked in the optometry sector for much of his professional career, commencing at Arthur Cox and Co. in Sydney as a sales representative in the 1970s before moving to Optical Manufacturers, an importer of spectacle frames privately owned by Gerald Dagg, Keith Horton and Norman Smythe (one of Australia’s first registered optometrists).

It was here that Mr. Heggie met and worked with Chris Hall who later became his long-term business partner. Mr. Heggie was transferred to Brisbane in the late 1970s to run the Brisbane office of Optical Manufacturers and remained in Queensland for the rest of his working life.

Mr. Heggie and Mr. Hall worked at Optical Manufacturers through several ownership structures until they decided to buy the company out in 1994 from then owner Graham Smorgon. Optical Manufacturers continued to import and distribute frames and optical instruments, however following the demise of their major frame supplier Marine Optical, their focus increasingly turned to optical instruments.

In 2006 Device Technologies approached Mr. Heggie and Mr. Hall with an offer to purchase Optical Manufactures. An agreement was met and the company sold, with both co-founders continuing on as employees.

Mr. Hall said throughout their partnership he and Mr. Heggie were great mates. “Bill was a thorough gentleman, very down to earth, very caring, and very family oriented. He was as honest as the day was long – he played straight down the middle and that’s the way we did business, which is why I believe we were so successful. Everybody loved Bill, he was so vibrant and outgoing – he is enormously missed.”

Mr. Heggie is survived by his wife Ingrid, their three children, Ryan (who works with Device Technologies), Asha and Lara, and 4 grandchildren.