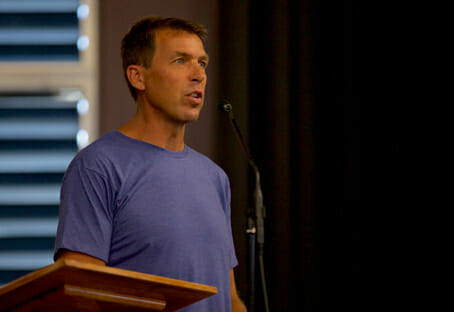 We are all told that we should be advising our diabetic patients to eat a healthier diet, one that will help control their diabetes, and its complications, among them eye problems. But what exactly is a healthy diet and is there any truth in the newly proclaimed concept that fat is our friend, whereas sugar and carbohydrates are best avoided?

The low carb, healthy fat diet is an approach to eating that essentially tips the whole low fat food paradigm upside down. It’s an approach that is being recommended by Professor Grant Schofield, a respected PhD public health academic of 20 years.

Professor Schofield’s research and practice is driven by the central place that real food plays in our health and wellbeing, along with a desire to “help the world change” and help people “be the best they can be”.

One of three authors of the instructional book What The Fat?1 and affectionately known as The Fat Professor, Professor Schofield is at the forefront of challenging the widespread fat phobia that has pushed us to eat a diet full of processed, carb-laden food.

We’ll need to do something drastic like flip the food pyramid upside down, before people will be able to see it in perspective

I heard Professor Schofield speak on the theory of metabolic disease and nutrition and the eye, at Queenstown’s Snow Vision Down Under in 2016. With diabetes in my family history, I consider myself at risk, and at that time had been looking into the benefits of the ketogenic diet. I have since moved onto a low carb, high fat lifestyle. Hearing Professor Schofield speak in person both inspired my personal direction and gave me the tools and information to pass on to my diabetic and at risk patients to help them improve their lives.

Soon after I heard Professor Schofield speak, I made contact with him again. I wanted to know more. I wanted to ask him questions on the topics of nutrition, holistic health care and their associations for us as primary health care providers.

After all, as optometrists, we understand that the eyes are a window to the rest of the body. We have the privilege of examining the only organ that allows us to see the state of the vascular system and we must remember to question the signs and symptoms we see; is it inflammation, bacterial imbalances of dry eye disease and blepharitis or metabolic conditions such as hypertension, cholesterol and diabetes? When a patient is unhealthy in their eyes, they are likely to be unhealthy in their body.

Professor Schofield believes a holistic approach to patient healthcare is important. “Current teaching is so disease orientated and a more integrative approach is necessary. We can’t just fix sick people; we have an ethical duty to prevent illness and promote wellbeing,” he told me.

He explained that the basis of modern metabolic disease can be thought of as too much blood sugar, represented as high HbA1c or excessive insulin secretion, or both, adding “Insulin resistance is nature’s way of telling you, you didn’t need as many carbohydrates as you thought you did.”

While modern metabolic disease can be managed with medications, he said prescribing diets that stabilise our blood glucose and prevent an over secretion of insulin even in the presence of normal blood sugar, can be just as effective. To a greater extent, research published recently in Journal of Medical Internet Research has potentially shown that with the correct diet there may be no need for as much medication, if at all.2

However, because people differ in their levels of insulin sensitivity and their ability to handle carbohydrates in their diet, the benefits of restricting dietary carbohydrates will also differ between different people.

Professor Schofield recommends that the starting point then, is to remove refined carbohydrates because these are the biggest problem. These should be replaced with a diet rich in fruit and vegetables and possibly legumes. To take this a step further, the fruit, vegetables and legumes should be in season.

From an age-related macular degeneration (AMD) standpoint, the healthy fat aspect of Professor Schofield’s prescribed diet fits very well with the AREDS2 Guidelines; avoid highly refined polyunsaturated oils, which have the highest association with AMD and its progression, and use traditional fats and oils such as olive, coconut, butter and ghee which were used prior to our current epidemic of metabolic diseases. The low carbohydrate, healthy fat diet also promotes eating nuts, seeds and fatty fish; foods associated with a decreased risk of AMD and also a rich source of protective anti-oxidants.

On the topic of supplements, Professor Schofield really wants us to consider how appropriate they are for the condition itself; however he acknowledged the difficulty of putting a blanket rule on the use of supplements when there is such varying evidence out there. “In the case of AMD, we know that lutein and zeaxanthin and other antioxidants are protective, and it’s possible to get an adequate intake of these from low carbohydrate, healthy fat foods such as eggs, cooked vegetables, fruit, and, in the case of zinc, seafood and meat, every day of your life without using supplements,” Professor Schofield told me. “There’s definitely a good case for vitamin D supplementation in winter, no reason for scepticism there. Vitamin B6 is a supplement that can damage the nerves, including impaired vision, if used inappropriately, which is something that not enough doctors know.”

The concept of increased fat intake obviously stares down the barrel of the Heart Fat hypothesis and definitely does not align with the previously taught food pyramid – however neither does it fully align with the Heart Foundation’s new food ‘Apple’ or ‘Healthy Plate’ or ‘Heart’, which appears to only be a small shuffle in the right direction. “We’ll need to do something drastic like flip the food pyramid upside down, before people will be able to see it in perspective,” Professor Schofield told me.

Opining that fat has been given the blame because it is present at the crime scene of heart conditions in the form of cholesterol and atherosclerosis, he pointed out that so too are high carbohydrates… or as Ben Warren, from Be Pure Clinic says, “carbohydrates are an unessential nutrient”.3

Those lucky enough to be at last year’s Snow Vision will remember Professor Schofield’s tale of a Scottish gentleman admitting himself to hospital to be kept on vitamins and fluids in order to cure his obesity. The gentleman went just short of a year without food and survived. He was discharged having lost the desired amount of weight.

The true basis of the heart fat model, according to Professor Schofield, goes like this; in the presence of carbohydrates and high insulin, the body uses glucose as a fuel source preferentially over fat, thus it is stored as fat in the body, often in undesirable places like the liver and as visceral fat.

When we replace our carbohydrates with healthy fats, remarkable things happen. Because insulin stimulates the synthesis of cholesterol, a normalisation of insulin from a more stable blood sugar leads to a normalisation of cholesterol. And because insulin stimulates the retention of salts and water, a low carbohydrate, healthy fat diet often reduces or eliminates the requirement of medications to treat hypertension. Often people will need to supplement salt into their diet if their carbohydrate intake is low enough, such as those on the ketogenic diet.

It’s exciting to see that Professor Schofield has had more and more cardiologists willing to test the idea of a low carbohydrate, healthy fat diet as part of their journey to help patients achieve healthier hearts.

Professor Schofield’s opinions can be found at profgrant.com where he writes a well thought out article each week.

Ryan O’Connor is an optometrist with Paterson Burn in New Zealand. He completed his Bachelors Degree in Optometry from the University of Auckland in 2013, following a Bachelor of Science in Anatomy from the University of Otago in 2009. As part of his Science degree he sat papers in functional, reproductive and neuro anatomy, applied physiology, zoology and sports nutrition. A keen rugby player,

Mr. O’Connor takes an interest in sports performance and nutrition and drives his endeavours into the field of sports vision. This is complemented by his passion to improve the lives of young children as one of Paterson Burn’s key paediatric optometrists.