Almost 50 Years on, Contact Lenses Keep On Keeping On 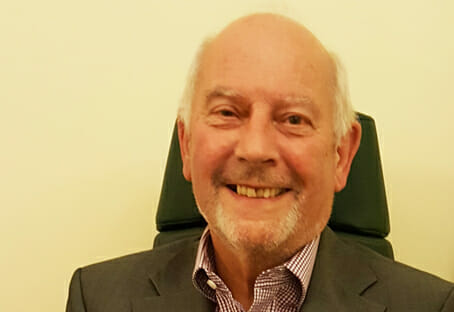 In what could well be a contact lens world record, a patient has worn the same pair of contact lenses for almost 50 years.

The UK based patient, Michael Brett, was prescribed contact lenses on 1 June 1964 by Sally Miller (now Dobson), who was a student of optometry at the time, studying at The City University in London.

Last year, Mr. Brett attended Specsavers, St Annes on Sea in the United Kingdom, where he had his eyes tested by optometrist, Edwin Shield.

“In December 2016, I tested Mr. Brett who attended for a routine eye test and contact lens check,” Mr. Shield told mivision. “I mentioned that it would be useful if he had the original specifications of his current lenses and we arranged a follow up visit.

I assumed this was a record of his first fitting and he had replaced the lenses over time but no, this was the specification for the actual lenses he was wearing

“I was quite impressed at the follow up when he produced a yellowed original specification first issued by Northampton College in London in 1964. I assumed this was a record of his first fitting and he had replaced the lenses over time but no, this was the specification for the actual lenses he was wearing. As an electrical engineering student who was keen on cricket, his optometrist had suggested wearing contact lenses and referred him up to Northampton College. There, student Sally Miller had fitted him with hard lenses under supervision of New Zealander Kerry Atkinson, a pioneer of the global contact lens market. They were provided much cheaper than their full retail value to allow students to gain experience, probably much the same as we do today. He reported that he was still wearing these actual lenses.”

Mr. Brett’s first pair of contact lenses – a clear pair – were machined on site by students. In 1967, on a trip to South Africa, he ordered a second pair of contact lenses made to the same specification, but with a tinted material for playing cricket. In 1969, he lost one of his original clear lenses, and ever since has used the original clear in the right eye and the South African tinted lens in the left.

Mr. Brett wore the contact lenses every day for most of the day, and has worn ready-readers since becoming presbyopic.

Mr. Shield reported that visual acuity was R 6/7.5, L6/10+2, partly due to a degree of cataract. He said upon inspection, the old lenses were “hardly scratched and looked to be in quite good condition”.

“His corneas look great (but obviously he’d have to have a period of no wear prior to any future biometry for cataract surgery) and he continues to do what he was told all those years ago, cleaning them in washing up liquid and moistening with saliva before insertion… Not the advice we might give today but hard to dissuade him form continuing when he has an unblemished 53 year contact lens wearing career!”

After retiring as an engineer, Mr. Brett filled his time as a taxi driver until recently. He has arranged to return to Mr. Shield in December, who “will watch him closely”.

Ms. Miller (now Dobson)went on to pursue a successful career as an optometrist, owning two practices in the United Kingdom before moving to Zimbabwe, where she worked as a locum until she retired.

Mr. Atkinson is a part-time teaching fellow at the School of Optometry at Auckland University.